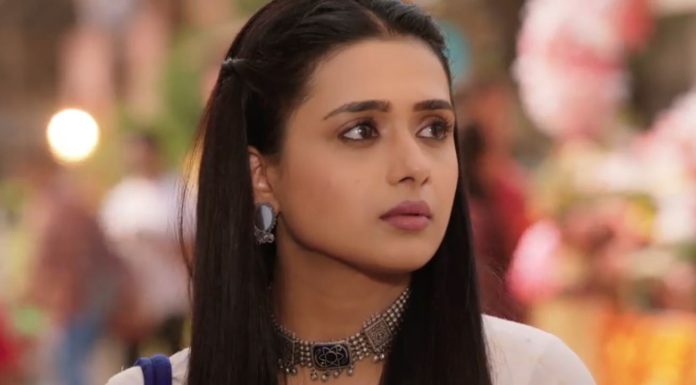 Sasural Simar Ka 9th November 2021 Written Update Shocking caller Samar rehearses about making an apology to Simar. Aarav tells him that the one who makes an apology from the heart. Simar comes there and completes his line that such people become more great. She asks him how does he know, someone dear to her had told this to her. At Oswal mansion, Reema takes care of Vivaan. He tells her that their relation has become toxic. She tells that she maybe devil for him, but he is her God. He asks her to stop her nonsense.

She tells that she would have left him, but she is different. She admits that she belongs to him, she loves him a lot. She asks him to regard her wrong if he wants. She doesn’t want to beg him for his love, but instead fight for it. She challenges him. She just wants to win him. Vivaan is surprised by her obstinacy. Inspector asks Badimaa to get Vivaan’s signatures on the FIR. She asks Aditi to go and call Vivaan. She wants the Inspector to find out her other enemies as well, who were involved in the crime. Chitra gets tensed. She doesn’t want her name to get known. She lies to the Inspector that Vivaan isn’t at home. Reema tells that Vivaan is in his room.

Chitra tells that Vivaan isn’t doing well. Reema takes the FIR to get Vivaan’s signatures. Chitra asks her to stay away from their family matters. She tells that she will send the signed papers. Reema questions her if she doesn’t want the criminals to get caught and punished. She asks Chitra does she feel caught. Chitra asks her to mind her own business. Reema suspects Chitra’s tensed face. She thinks to find out the truth and then target the first member of the Oswal family. Samar apologizes to Simar. He asks her to sing for the album.

He makes a fresh start. Simar tells that she doesn’t remember those who are dual-faced. Samar tells that everyone has masks on their faces. Aarav asks Samar to talk to Simar with respect. Simar identifies Mr. Sodi as Aarav. Reema spies on Chitra. She gets Chitra’s phone. She tries to crack the passcode. She unlocks the phone and also her secrets. Samar tells that Sirav is their album producer. Simar forgives Samar. He asks her if she will work in his music album. She tells that they can’t work together. She doesn’t want to cheat her work.

She apologizes to Yamini that she can’t take the assignment. Yamini asks her not to rush in her decision. Simar tells that she is hearing the voice of her heart. She leaves from Yamini’s house. Samar tells that Simar insulted him twice. Aarav asks him to convince her at any cost. Samar doesn’t know how will he convince Simar. Aarav commands him to go after her. Chitra snatches her phone from Reema. Reema tells that she wanted to find out her secrets. She asks Chitra why is she so scared if she didn’t do anything.

Chitra hides Rana’s call from her. She asks Reema to leave from her room. She ousts Reema and calls back Rana. She tells Rana that Reema is doubting her already. She promises that Vivaan will not sign the FIR, Mohit will be released soon. She asks Rana to keep her involvement a secret. She doesn’t want Badimaa to know that she wanted Aarav to get attacked that day. Samar sings a song for Simar, in order to convince her for singing in the music album. Aarav watches them from far. Simar asks Samar not to force her to sign the album. Samar tells that he can’t pretend more. He sweetly admits the truth of his problems. Simar finds him genuine.

He wishes that someone understands him. He tells that they are similar, they love music and are not dual-faced. Simar gets a voice call. She is shocked to know Roma’s problem. Aarav also learns about Lalit and family’s arrest because of Roma. Roma asks Simar to come home and help her. Simar and Aarav rush to help their families. Simar gets close to see Aarav’s truth, when he removes Mr. Sodi’s disguise in the car. Aarav gets saved because of the tinted glass. Simar meets Roma, and learns how Roma got her husband and in-laws arrested. She asks Roma why didn’t she call Aarav or her. She tells that their parents would have helped her.

Roma tells that she can’t cry every day in front of their parents. Simar tells that its not a weakness to get someone’s support, family is there to support her. She asks Roma not to encourage the evil-doers. She wants Roma to raise a voice against domestic violence. Aarav and Gitanjali meet the Inspector, and learn the dowry and domestic violence charges on Shobha. Inspector tells that its non-bailable charges, Roma has to withdraw the case, only then Shobha will get freed. Gitanjali is ashamed of Shobha, that she took dowry from Roma.

Aarav asks her not to think of family respect, and think of Roma, why Roma was forced to take this step. She tells that girls these days want their rights. He defends Roma, and tells that its better than Roma knows her value. He asks her to speak to Roma. She rebukes him when he lectures her on women power, just because of Simar. He tells that he wants Shobha and family to get released. He adds that just she is the one who takes the decisions for the family. She doesn’t want to bend in front of Roma. Reema meets them and asks Badimaa not to lower her pride.

Reviewed Rating for Sasural Simar Ka 9th November 2021 Written Update Shocking caller: 3/5 This rating is solely based on the opinion of the writer. You may post your own take on the show in the comment section below.