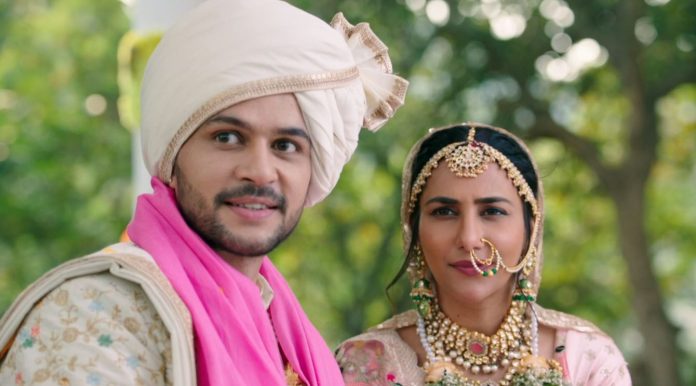 Bade Acche Lagte Hai Written Update 9th November 2021 Ram’s decision Nandini and Shubham get worried about Shivina as they find it suspicious that Priya and her family are at temple together. Shubham and Nandini rush to look for Shivina. On the other hand, Shivina and Akshay exchange garlands at the temple while Priya reaches temple. The auto driver sees her getting dizzy. Later Ram talks with Adi while they drive and tells him that he could not manage to talk to Priya as she was very angry with him. He further says that her anger is not baseless as I broke Shivina-Akshay’s marriage and did not even tell her the reason.

He blames himself as he feels that it is his fault that he cannot include anyone in his decisions and has treated her family badly as well. He also tells him about Priya seeing the annulment paper prepared by her mother as well. Adi tells him that then Priya must be thinking that he is breaking their marriage. Ram feels guilty about his actions. Later the auto wala calls Ram to tell him about Priya’s condition and also tells him that he has dropped her in the temple. Adi asks him how he got Priya’s auto wala’s number to which Ram tells her that he has got it from Priya as she too has my driver’s number.

Adi praises him by calling him a “perfect husband” and Ram found out funny as her wife thinks that he has prepared the annulment paper and he is calling him a perfect husband. Adi then asks him about Akshay and Shivina’s wedding to which he replies that they are not getting married. On the other hand, the couple is taking pheras in the temple when Priya reaches there. Ram gets emotional while talking about Priya and tells Adi that Priya will get angry at him and her father and brother too.

Adi asks him why Priya remains always angry with him to which he tells him that it’s in her mechanism to be angry all the time and he cannot get why she is always angry with him. Adi tells him that everything will be fine, he just needs to apologize to her lovingly. On the other hand, Shivina and Akshay start taking the pheras and Priya asks for forgiveness to God as she has lied to Ram. Later, Nandini and Shubham search for Shivina but fail to find her and then they decide to go to the temple to stop the marriage.

Shivina-Akshay takes pheras and Priya asks for forgiveness to her mother in her mind as she is doing all this against her wish and her marriage is already breaking. She further thinks that they will think that this marriage never took place. As the couple is about to take their fourth phera Priya keeps on thinking that her marriage with Ram was never solemnized and he will have to bear his hatred all her life. The couple completes the pheras and everyone congratulates them. Maitrayee tells her that they are glad that she came at that time Ram reaches the temple.

Brinda tells Ram at the temple to go and talk to Priya and tell her that he has not prepared the annulment paper. She asks him to put the blame on Adi and tell her that Adi has prepared the paper as he was getting over protective about him. Ram clarifies that he is doing all this as Priya is right and she should not be punished for the wrongdoings of her brother. Adi and Brinda fight with each other while Ram leaves for the temple. As Ram enters the temple a shopkeeper offers him prasad for tomorrow’s Karva Chauth and tells him that nowadays husbands are also keeping fast for their wives.

Listening to this, Brinda tells Ram to keep fast for Priya and they laugh. Later Akshay goes to perform the sindoor ritual and Priya stumbles upon Ram and the sindoor ritual gets complete. Ram goes there and sees them getting married and gets shocked. He questions Priya to which she replies that two couples are getting married out of their love. Ram tells her that she cannot do such a thing as she never cheats on others, she never lies. He also tells her that she herself hates people who lie and she cannot do that.

Priya tries to apologize but he gets angry and shouts at her by saying that she has gotten her sister married without informing him. Priya tells her that he should not talk about betrayal as he himself has betrayed his sister and broken his promise to get her to marry the person she loves. She blames him by saying that he hurts the feelings of others and imposes his decision on them without caring about their feelings, without knowing whether they agree to it or not. She tells her that he is right as such things only her father can do but how he can do this to her sister. Ram further blames her by saying that he has not done anything as it is her who helped his sister elope and get married.

Priya tells him that Akki is not her step-brother and she cares for him more than her own brother. That is the reason she married without questioning him once about his actions. Priya demands an answer from Ram for that incident to which he replies that it is because of her step-brother who tried to kill him. He further states that Raj mixed prawns in his noodles on the day of their wedding knowing the fact that he has severe allergy from prawns. He further says that while he was coming to the wedding venue he got reactions and fell unconscious in the road and he recalls that incident.

Everyone gets shocked hearing that and Ram tells that road siders helped him that day and took him to the hospital. He then says that he still came back because he has promised her and Meera maa that he will solemnize this wedding and he kept his promise. Brinda supports Ram and tells Priya that he is telling the truth and they can show her proof also and show her the video. Ram then tells her that Shivina is not her sister only and he considers her as his daughter and loves her a lot. He also tells her that he cannot let her sister get married to such a family.

He further adds that when Priya can fight for her family then he too can fight for his sister. Priya has no right to ruin her sister’s life. Ram reminds her whatever he has done for her and she thinks only she is right and others are wrong. He gets angry and states that if he is telling that this marriage cannot take place then there must be some reason behind it. At that moment Nandini and Shubham reach there and Nandini shouts at Shivina seeing her married. Shubham tries to drag Shivina from the mandap when Akshay stops him. Nandini questions Shivina how she could do that and also questions Ram about his promise that he has made to her. Meera Maa apologizes on behalf of Akshay.

She further says she knows that her children will have to answer for their actions and they will be punished for their actions as well. She tells Ram not to punish his sister for the misdeeds of her children. She promises him that she will save Shivina and Akshay from the bad eye of his son and husband. Ram asks her how she would do that as a lot happened to him and nobody saved him then how she will save his sister. Nandini asks him not to believe her and Ram asks Meera maa about her actions if it would have been her own children in place of Shivina. Meera maa remains silent at this question.

Reviewed Rating for Bade Acche Lagte Hai Written Update 9th November 2021 Ram’s decision: 2/5 This rating is solely based on the opinion of the writer. You may post your own take on the show in the comment section below.