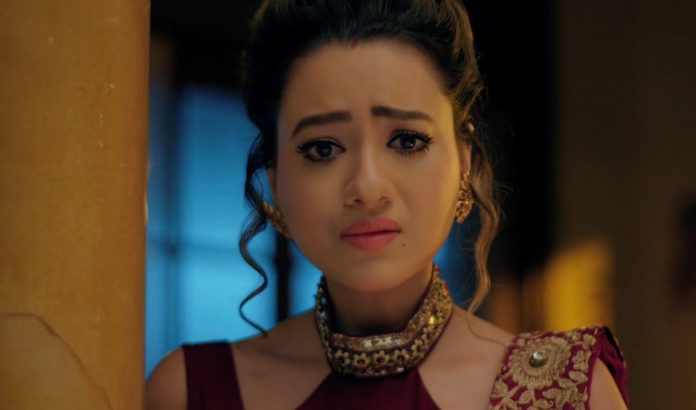 GK continues making Baa realize that even dry bread comes with a lot of hard work but bread with ghee comes with destiny. He tells Baa to see that Bapuji did hard work to get whatever he could for his family. GK says the husband is not a bank fd but a human who has heart, feels, sacrifices much for his children. Baa says to GK that he doesn’t know what kind of father Bapuji is? GK replies that seeing Dolly and Anupama, he knows what kind of a father Bapuji is. He taunts Baa saying that he also knows what kind of a mother she is can be guessed seeing Vanraj’s upbringing.

Baa says to GK that she doesn’t talk to servants. This angers Anuj and he shouts Baa. GK stops Anuj and tells him that Baa is not in her senses right now, she won’t understand anything. Anupama requests Baa, go to scold or beat her but not say anything to Bapuji. Anuj also requests Baa to scold him, not Bapuji. Kinjal tells Baa that children learn from their elders. She asks Baa how she will feel if she treats Paritosh the same as she is treating Bapuji. Samar asks Baa if Kavya treats Mr. Shah the same way?

Kavya asks, why are you people involving me. Paritosh asks Baa to calm down. He tells her that her anger was okay but speaking ill about Bapuji is not right. Baa says she will not shut down today. Dolly tells Baa that she will not be quiet if the latter insults her father. Both Dolly and Baa get into a war of words. Baa breaks her relationship with Dolly and calls her a stranger. She also shuts Sanjay Ji. Mamaji also speaks in support of Bapuji. Baa in anger slaps Mamaji. She tells Mamaji that he was born to forget everything not for speaking. This shocka everyone.

GK says, “Vinash Kaale Vipreet Buddhi”. Baa again calls GK servant and asks him to be quiet. Baa asks everyone to be quiet. Mamaji tells Baa that in future everybody will insult her someday. Both brother-sister get into a war of words. She blames everyone for ruining her house. She starts breaking things in Anupama’s academy. Everyone tries stopping her and feels shocked. Kavya thinks when she will be the owner of the factory, she won’t have to pull off everything as Baa did that job. Baa tells Anupama that the factory and its land is hers not the former’s. She refuses to hear any lecture from Anupama.

Baa asks Anupama to get out. She tells Bapuji that he will remain as a dumb puppet in the house. Baa further tells Bapuji that he will not speak anything against her or her son from now on. She says that now she will rule the house and Bapuji will agree to her orders. This shocks everyone to the core. Kavya smirks. She asks Bapuji to let’s go home and also tells him that he will not have any relation with Anupama. Bapuji says he doesn’t want to return to the Shah house. He asks Baa what she will do by taking him to shah house. Bapuji says he should get a place in the house if he is not a good husband or father.

Bapuji says he was mad, who gave Baa, respect and love for years. He says he didn’t know that wealth is bigger than respect and love in this world. He tells Baa that he will work hard and sleep on the road but with respect. He refuses to return to the shah house. Bapuji breaks down and falls on the floor. Dolly and Anupama handle Bapuji. Past happy flashbacks are seen. Baa asks Bapuji to stop acting and come home. Anupama gets angry and tells her to be quiet. She tells Baa that if she speaks one more word, she will cross all her limits. She warns Baa to not dare speak anything against Bapuji.

Anupama says she is lucky to get love from two fathers. She praises Bapuji’s behavior towards his daughter in law. She hugs Bapuji and tells him that his daughter is alive right now. Baa asks Anupama will she become a son for Bapuji? Anupama replies that a daughter doesn’t need to be a son for her father. She says she is enough for Bapuji. Anupama says she will give her house to Bapuji. Bapuji asks Anupama if she will take him to her house. Anupama replies that they will go to his house. Paritosh asks Baa to stop Bapuji. Baa asks everyone to go to hell. Bapuji asks Anupama to take him with her.

Anupama tells Baa that she made only mistakes till now but today she committed a sin. She tells Baa that factory and house, everything is hers from today. She tells Baa from now on she will have wealth but will be considered very poor from now on. Anupama and everyone take Bapuji with them. Baa in anger says she doesn’t need anyone, everyone goes. Bapuji reaches Anupama’s new home. Anupama tells Anuj that she will anyhow get Bapuji, his respect back, which he deserves. At shah house, Baa recalls past events when her family members left the house. She is seen swinging in anger. Kavya gets scared seeing Baa’s behavior. She thinks of bringing Bapuji back before Vanraj’s return. Baa is seen mad and angry.

Anupama makes Bapuji sleep. In his sleep Bapuji apologizes for failing. Anupama gets emotional. Anuj asks her to calm down. Anupama cries seeing Bapuji’s breakdown. She asks why Bapuji had to hear so much insult from Baa. Anupama says she is now very angry with Baa for crossing her limits and insulting Bapuji. She says she will never forget Bapuji’s insult and will never forgive Baa.

In the next episode, Anupama will try to make Bapuji happy but will fail. On the other hand, Mamaji will leave the Shah house too, cursing her for getting alone. Kavya will ask Baa to understand that they need to solve everything before Vanraj’s return. Baa will see Kavya with a shocked expression. Anupama on the other side, will be seen taking care of Bapuji.

Reviewed Rating for Anupama 16th November 2021 Written Update Kavya’s move: 3/5 This rating is solely based on the opinion of the writer. You may post your own take on the show in the comment section below.