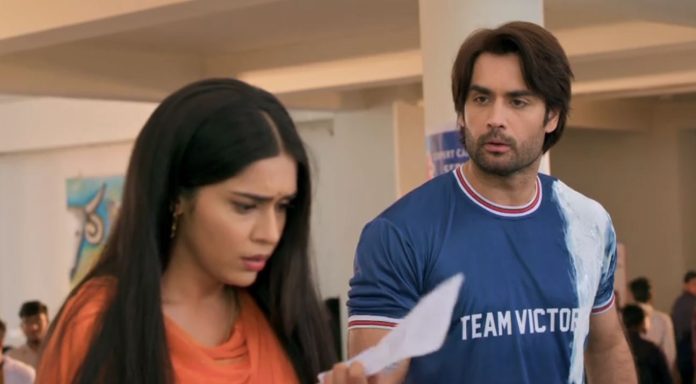 Sirf Tum 16th November 2021 Written Update Ranvir meets Suhani Ranvir drags the girl in front of the college. He asks her to kiss him publicly. The girl finds him mad. He tells that he just does what comes in his mind. The girl asks him to leave her. Ranvir madly runs after her for a kiss. His friends follow him to stop him from making such a mistake. Suhani gets her admission form from the counter. Ranvir comes across Suhani while running after the girl. He saves Suhani from falling down the stairs. Suhani regrets that her form got torn. He shouts her for spoiling his mood and jersey. Suhani cries for the torn form. Ranvir stops on hearing her cry. Riya also scolds her friend for trying to woo Ranvir.

She asks her to stay away from him. She tells that Ranvir is only of her. Ranvir asks Suhani why is she crying. Suhani tells that her admission form is torn, the counter is now closed and she can’t get another one. Ranvir goes to get an admission form from the office. He gets the admission forms for Suhani and asks her to use it. Suhani and Ranvir don’t get to see each other. He goes for his footmall match. Ansh hates Ranvir. Ranvir joins his team. He is asked to welcome the chief guests, the college trustees, Mr and Mrs. Vikrant Oberoi.

Ansh welcomes Vikrant and idolizes him. He tells that he wants to become like him one day. Ranvir avoids Vikrant and hands over the bouquet to Mamta. He hugs Mamta with much love. It gets revealed that Ranvir is Vikrant and Mamta’s son. Ranvir humiliates Vikrant in front of Mamta. He doesn’t have any respect for his dad. Mamta wishes him all the best for his match. Suhani asks someone to find Riya at the football ground. Rakesh comes to the same college to meet his boss. Ansh wants to defeat Ranvir in the game.

Ranvir plays well to win the match. Vikrant isn’t interested to stay back and watch the match. He tells Mamta that they shall leave before Ranvir insults them more. Vikrant and Mamta leave from there. Rakesh meets Vikrant and gives him the important file. Mamta tells Rakesh about Ranvir’s match. Rakesh asks about Ranvir topping the medical college. Mamta praises her son. Vikrant dislikes Mamta talking to Rakesh. He takes her home.

Ansh asks Rocky to provoke Ranvir and make him lose his focus. Suhani looks for Riya. Rocky asks Ranvir about his sister, and makes him lose his temper. Ranvir angrily bashes him. Suhani reaches there to witness the fight. She gets pushed by someone. She falls over Rocky. Ranvir stops himself from punching Rocky when he sees Suhani. She runs away from there. Ranvir falls for Suhani. Its love at first sight for him. She gets his attention by running away from him. She looks different to him. Riya goes to call Suhani. Ranvir gets interested in knowing about Suhani. Keep reading.

Reviewed Rating for Sirf Tum 16th November 2021 Written Update Ranvir meets Suhani: 3/5 This rating is solely based on the opinion of the writer. You may post your own take on the show in the comment section below.