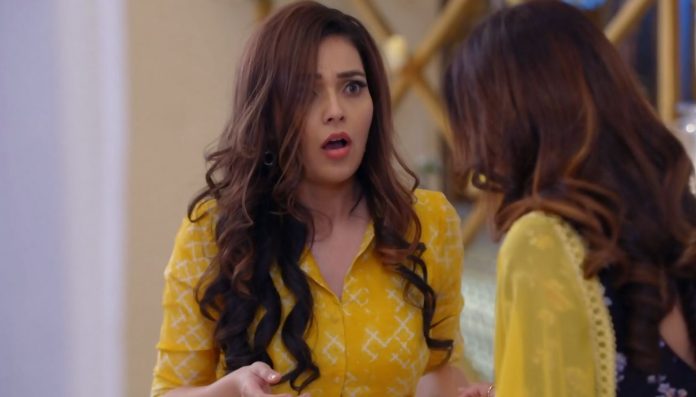 Kundali Bhagya 18th November 2021 Written Update Sona’s secret Sonakshi attends the courier guy to receive the courier before Karan and Preeta see her at the main door. She opens the envelope and checks Preeta’s pregnancy reports. The courier guy asks her why is she checking the reports, when it doesn’t belong to her. The guy identifies her as Sonakshi, and tells her that the courier has come for Preeta. Rishabh hears them talking. He takes the courier from Sonakshi’s hands.

He tells that he will give it to Preeta. He thanks the guy and sends him off. Sonakshi is worried that Rishabh took the reports with him. She wants to save her secret from coming out. The secret of her biggest deceive will completely destroy her plans. Sonakshi tricks Karan and sends him away. Sherlyn stops Sonakshi and asks her what is she planning that she has deliberately sent Karan away. She tells that she is noticing Sonakshi since a long time, Sonakshi is really up to something.

Sonakshi refuses to answer her. She runs after Rishabh to get the reports some way. Sonakshi attempts to steal the reports and get away quickly. She comes across Preeta in the corridor. She collides with Preeta. She unknowingly drops the reports in front of Preeta. Sonakshi gets worried that Preeta will see her reports. Ahead in the track, Preeta will be getting away from the Luthras and also Karan’s life. What twists will come that drifts Karan and Preeta apart? Is a leap twist coming to sabotage the beautiful relationship of Preeran. Will Sonakshi succeed in cheating Karan and Preeta once again? Keep reading.

Sonakshi checks the pregnancy reports. She hides it quickly. She signs to receive the reports. The courier guy sees her name Sonakshi when she signs, and tells that the courier is for Preeta. Rishabh comes and takes the courier to hand over to Preeta, who is busy at the moment. Sonakshi doesn’t want Karan, Preeta and Luthras to know that Preeta can conceive. She can’t plan to make an entry in the house using Pihu. She wants to stop the reports from reaching Preeta. She goes to steal the reports, which holds her future in Karan’s life. She keeps an eye on Rishabh. Rishabh calls Karan.

Preeta goes to check for the courier. She doesn’t see the courier guy. Sonakshi lies to Karan that Pihu is calling him. She sends Karan to Pihu. Rishabh looks for Karan. Preeta goes after Karan to tell him to call the courier guy. Rishabh calls out Preeta, but she rushes. Sherlyn keeps an eye on everyone. She senses Sonakshi’s move. Rishabh thinks Preeta is busy. He keeps the reports in his pocket. Sonakshi’s task gets tough. Sherlyn irritates her by the questions. She asks Sonakshi about sending Karan away. Karan finds Pihu sleeping. He wonders why did Sonakshi lie. Preeta smiles seeing Karan and Pihu.

She further adds that such tension is natural. He asks her to relax, everything will be fine in the reports. She doesn’t want his heart to break if their hopes shatter again. She asks him to look after Pihu. She goes out to wait for the reports. Sherlyn asks Sonakshi why is she shocked. Sonakshi advises her to better focus on the party. Sherlyn tells that her focus is on Sonakshi. Sonakshi asks her to focus on herself. Kareena calls Sherlyn to attend the guests.

Sonakshi thinks Sherlyn doesn’t focus on her good husband. She wants to steal the reports from Rishabh and goes around to find a chance. Rishabh tells that Karan has kept a surprise party. Rakhi praises Preeta who managed everything in the end moment. Mahesh and Rishabh know that Preeta manages everything always. Sonakshi asks the guests to enjoy the party. She announces the dance performances. She engages Rishabh in the dance, hoping to get the reports from him. Sonakshi also dances with Rishabh. She succeeds in getting the reports from Rishabh. She doesn’t get caught by Sherlyn this time.

He realizes that he lost the courier. Karan asks him not to worry, he will find it. Preeta goes to look for it. Sonakshi denies the truth. Sherlyn snatches the reports from her. Sonakshi warns her about the misbehavior. Sherlyn just wants to know the truth. Sonakshi tells that she doesn’t know understand what does Sherlyn mean. Sherlyn shows the videos to shock Sonakshi. She tells that Sonakshi was spiking the milk and then took it for Preeta. She shows the video of Sonakshi stealing the reports from Rishabh’s pocket. Sonakshi tells her the truth that Preeta can conceive a child. Sherlyn is shocked to know this.

Sherlyn tells that Sonakshi is lying. Sonakshi calls her a fool. She admits that she had fooled the Luthras, she had written Preeta’s future, she madly loves Karan and wants to get him back. Sonakshi tells that she always loved Karan, she made a mistake that she couldn’t confess love to him, she planned the marriage drama just to get Karan, she went to invite her doctor friend and got to know about Preeta’s reports blunder. She then asked her friend to handover the reports to her. She had kept the truth a secret, thinking Karan will leave Preeta if he learns that she can’t conceive. She admits her entire plan in front of Sherlyn. Sherlyn is shocked to know how long Sonakshi dragged her lie by her cunning plots. Keep reading.

Reviewed Rating for Kundali Bhagya 18th November 2021 Written Update Sona’s secret: 5/5 This rating is solely based on the opinion of the writer. You may post your own take on the show in the comment section below.