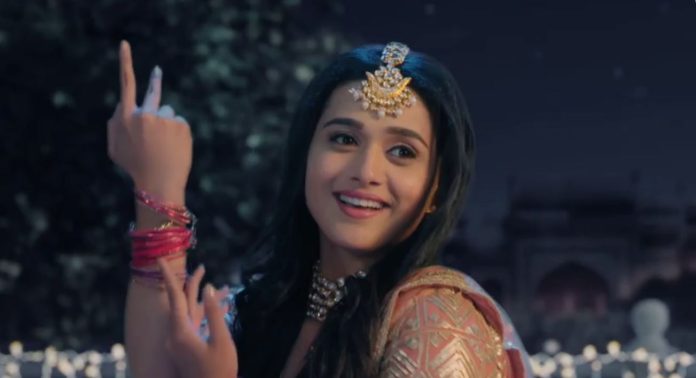 Sasural Simar Ka 17th November 2021 Written Update Impressive Simar and Aarav live with their memories and try to find peace in their lives. They always dream of each other. Simar and Aarav go to have their sargi. Reema wants to keep the fast for Vivaan’s long time. Sandhya tells her that fast is kept for togetherness and strong bond. She asks Reema to eat the food and drink the water by Vivaan’s hand. She feels the couples who celebrate Karwachauth together are really lucky. Aarav hears Sandhya. He wants to drink the water from Simar’s hand and break his fast. Badimaa tells that she didn’t expect Reema to wake up early and keep the fast.

She blesses Reema and Sandhya. She asks them to fulfill the sargi rituals. Reema wants to have the fast for Vivaan’s sake. Badimaa scolds the servant for forgetting things. Servant tells that Simar used to guide him for all the work. Reema takes the responsibility of the family. She tells that she will take care of her family. Chitra gets the shelter in Shobha’s house. Roma joins the ladies to have the sargi. Simar asks her parents to have the food. Simar also keeps a fast for Aarav. Simar and Aarav try to have their sargi secretly.

Sandhya tells that Aarav got her sargi plate out of mischief, like he used to do it in his childhood. She tells that she came to take her Sargi, but thought to feed it to Aarav. Badimaa doesn’t let Aarav eat the food. She tells that Aarav isn’t a kid now, he can’t eat the food if he isn’t fasting. Aarav tells that he wants to change himself with the time, he was just stealing some happiness from his childhood. Badimaa tells that he isn’t doing anything wrong. She finds him in pain. She sympathizes with him, knowing he isn’t able to sleep at nights. He blames her for snatching his peace and happiness. Badimaa asks Sandhya to complete her Sargi fast.

Vivaan reminds Reema about the divorce papers. She tells that she remembers his love and also the papers. He can see her efforts to fix the things. He appreciates her efforts. He warns her against doing wrong with his family. He threatens of divorcing her. He tells that her realization is enough, he may soon forgive her and give her another chance. Reema is glad to hear this. She tells that she wants his love. She adds that she wants to help Aarav, who needs them in his difficult times.

She promises to bring out Aarav from the sorrowful phase. Vivaan can’t trust her. She asks him to trust himself if he can’t trust her. They get into a romantic moment. Simar hides the fact from her parents that she kept a fast for Aarav. She imagines Aarav with her. Simar talks of Aarav and makes her parents worried. They ask her to have some food. Simar gets into a fix. Badimaa hands over the house keys to Reema. Reema asks Badimaa if she is giving this to her so soon. Badimaa asks her not to daydream.

She takes Reema’s assistance. Reema asks Badimaa to find a girl for Aarav. Badimaa realizes that Reema is really cunning. She asks Reema to convince Aarav to marry someone. Reema tells that Aarav and Simar are a shield for each other, when one gets married, then the other will also agree to move on and get married. She tells that she will break up Simar and Aarav. She adds that she is just following Badimaa. Simar refuses to have the food. She doesn’t want to break the fast and lies to them. Later, Simar imagines Aarav and performs the dance for him. Will Aarav come home to break Simar’s Karwachauth fast? Keep reading.

Reviewed Rating for Sasural Simar Ka 17th November 2021 Written Update Impressive: 5/5 This rating is solely based on the opinion of the writer. You may post your own take on the show in the comment section below.