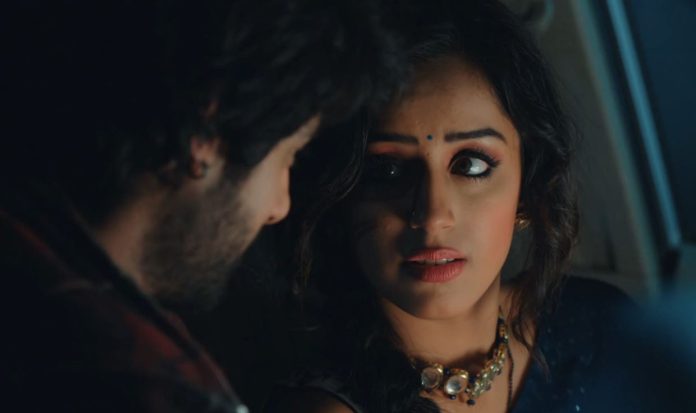 Yeh Hai Chahatein 17th November 2021 Written Update Upcoming Venky gets uncontrollable and starts throwing his pillow and mattress. Doctor, nurse and GPS together hold Venky to control him. Doctor says something badly affected Venky’s mind and they need to give him sedative to make him sleep. Venky gets unconscious on receiving sedative injection. GPS asks Vasudha what happened that affected Venky badly. Prisha reaches the restaurant where Rudra, Param and Mishka are. She asks Rudra if their plan moved even a step. Rudra replies no, Mishka and Param fought with each other and even are not talking or looking at each other.

Param and Mishka leave the restaurant. Rudra asks Prisha what to do now? Prisha takes him somewhere. Param and Mishka find their car tyres punctured. Mishka gets angry and looks at Param. Param asks Mishka why she is looking at him as his car tyres are punctured too. Mishka asks Param not to give himself so much importance. They think of booking a cab. A cab arrives. Param and Mishka tell the driver their addresses. The driver replies they live close to each other’s place so he can drop them both. Mishka refuses to share a cab with Param. She says she will book another cab.

Param sits inside the cab. Driver advises Mishka that she won’t get a cab easily in that particular outside area. He also tells Mishka that she might have to wait the whole night and moreover the place she is standing at is not safe. Mishka agrees to share the cab and sits inside with Param. Driver plays a romantic song, and both Param and Mishka ask driver to stop playing the song. Suddenly the car breaks down in between the road. Mishka says what she will do now. Driver says he will go to get a mechanic and asks Param and Mishka to pass their time till then.

This turns out to be Prisha and Rudra’s plan. The flashback shows how Prisha punctured Mishka and Param’s cars. It also shows that they took a cab driver’s help to leave Mishka and Param alone at a deserted place, so that they can spend some quality time together. Flashback ends, Rudra and Prisha get happy seeing their plan getting successful. On the other side, Mishka tells Param that he brings bad luck for her when they meet. She explains him with examples; firstly Mishka tells Param that her client didn’t come to meet her because she saw him in the same restaurant.

Secondly, outside the restaurant she saw her car’s tyre punctured and he was standing there. Thirdly, they together took a cab which broke down. Param says to Mishka the same thing happened with him because she is bad luck for him. Both Param and Mishka get into a fight with each other. Rudra gets angry seeing their fight from far away. Prisha asks Rudra to calm down as they will think of something. Rudra asks her to see how Mishka and Param are fighting. Mishka tells Param if he utters even a word more, she will not see his face. Param thanks God for giving him peace.

Angry Mishka leaves from the cab. Prisha and Rudra think this way their plan will get ruined. Prisha stops Rudra from leaving and thinks of another plan. On the other hand, Dr. Radha thanks GPS for giving her a lift. GPS says it’s fine. He tells Dr. Radha, he didn’t see Venky getting this much violent in the last 10 years. Dr. Radha replies that many things suddenly changed in Venky’s life. She continues explaining that Venky is getting his sense and memory back. GPS says he is sharing this with her because he feels something happened that badly affected Venky.

Dr. Radha tells the GPS that they need to go back to the hospital. She also says that they need to find what affected Venky and made him violent. Prisha asks Rudra to take out an animal voice. Rudra fails in it. Prisha asks him to play some scary voice using the internet. Mishka receives Prisha’s call and tells Prisha whatever bad happened to her and her location too. Prisha acts scared and tells Mishka that she heard that the place she is standing at is very scary as lion attacks occur there. Rudra plays a lion’s voice which scares Mishka and Param.

Mishka tells Prisha that she heard a lion’s voice. Rudra again plays a lion’s roar which scares Mishka as well as Param. Rudra gets romantic with Prisha. He says that he hopes Param and Mishka too get romantic like them. Dr. Radha and GPS return to the mental health clinic. They leave to check CCTV footage of Venky’s room. On the other side, a scared Mishka tells Param that they are near a national park. She also tells him that sometime ago a lion took a woman with him. Param asks Mishka to come inside the car as it’s not safe outside. Mishka shivers and says she can’t move. Param asks her why? She shows a snake to Param. Param gets scared too.

Prisha stops Rudra from leaving to help Mishka. She asks Rudra to let Param save Mishka. Rudra asks Prisha if Param gets scared too. Rudra agrees to Prisha and stops. Mishka asks Param to be with her. With the help of a stock Param saves Mishka from the snake. Scared Mishka tightly hugs Param and requests him to not leave her. Param comforts Mishka and promises her that he will not go anywhere leaving her alone. At the mental health clinic, GPs find that Venky got scared seeing something on Prisha’s phone. Dr. Radha asks GPS to ask Prisha to come to hospital tomorrow to see what Venky saw on her phone.

Param takes Mishka in his arms and makes her sit inside the cab. Prisha and Rudra get happy seeing Param and Mishka’s growing bond. Param massages Mishka’s hand and feet to comfort her. Rudra teases Prisha and gets romantic with her. Prisha and Rudra tell each other that they are incomplete without each other.

In the next episode, Param will ask Mishka if she will marry him? This will shock as well as surprise Mishka. Dr. Radha will give permission for Venky’s discharge. Mishka will tell Mishka that Param proposed to her for marriage. Prisha will call Mishka home. Venky will fall unconscious seeing Mishka. Mishka will recognize Venky.

Reviewed Rating for Yeh Hai Chahatein 17th November 2021 Written Update Upcoming: 5/5 This rating is solely based on the opinion of the writer. You may post your own take on the show in the comment section below.