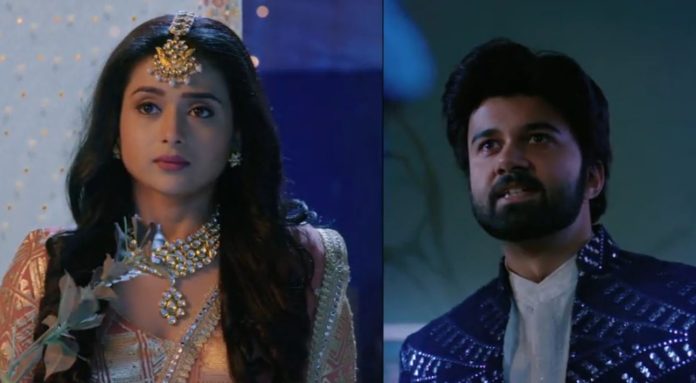 Sasural Simar Ka 20th November 2021 Written Update Aarav arrives Shobha fakes to faint down and engages everyone. By this time, Divya goes and exchanges the diyas. Aarav is locked in the room. Vivaan tells that Aarav will be coming. Simar gets Sandhya and Aditi’s picture. She likes to see them. She gets Aditi’s message. She worries for Aarav that he is keeping a fast. She prays for her Aarav. Samar takes the aarti plates. Indu asks Simar to help Samar. Samar and Simar make the arrangements. Roma tells Reema that the house looks really good. Reema tells that she is the bahu of a rich family. They find the diyas broken. Reema doesn’t want to spare the culprit. Roma asks her to solve the problem first. She scares Reema of Badimaa. Reema tells that she will order some diyas. She rushes to go and get the diyas.

Sandhya asks Reema to get the puja plates on time. Reema asks Sandhya to attend guests, she will get the plates and diyas soon. Shobha and Divya trouble Roma and Roma. Roma tells that just Indu can help them in such times. She asks Simar to make them talk to Indu. Reema tells that she wants Indu’s help. Roma asks Reema to see the situation and talk, Simar is also their sister. Simar learns their problem. She gives them a solution. She asks them to make diyas from the flour. Servant blesses Simar for solving their problem so soon. Reema isn’t thankful to Simar at all. Simar doesn’t care if Reema doesn’t thank her. Roma thanks Simar.

Simar turns and sees Samar playing with the channi. He tells that he was just trying to see her through the channi. She asks him to stop the nonsense. He asks the ladies to sing and dance until the moon comes out. Simar tells that they can’t sing and dance without having food. Samar tells that music has power in it. Aarav wants some magic to happen. He has to go to meet Simar. Samar plays the music. Simar sings and dances, while imagining Aarav with her. Roma and Reema save themselves from Badimaa’s anger, by making the diyas and taking the plates for the ladies in time. Shobha and Divya are shocked to see the diyas.

Shobha tells that someone smart has supported them. Samar tells Simar that the moon has appeared. Simar waits for Aarav. The ladies perform the Karwachauth rituals. She looks for Aarav. She recalls his words. She thinks he won’t be coming. She had a hope that he will surely come. She thinks he has no relation with her, so he won’t be coming. She lights a diya there. She performs the Karwachauth rituals by seeing Aarav’s picture in her phone. Aarav arrives there and calls her out.

Reema performs the rituals with Vivaan. She gets emotional. Vivaan asks her to smile, instead of crying. Reema smiles when he breaks her Karwachauth fast. Simar thinks she is imagining Aarav again, when its impossible for him to come. Aarav really comes there. He breaks Simar’s fast. Samar looks for her. Will he find Simar with Aarav? Keep reading.

Reviewed Rating for Sasural Simar Ka 20th November 2021 Written Update Aarav arrives: 5/5 This rating is solely based on the opinion of the writer. You may post your own take on the show in the comment section below.