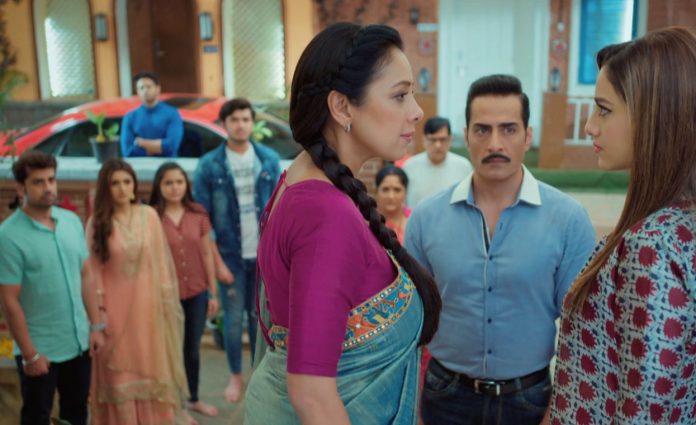 Anupama 22nd November 2021 Written Update Startling Drama Kavya blames Baa and Bapuji for not being able to accept her as their daughter in law. She also blames Samar for always being Anupama’s support, Pakhi for being confused and Toshu for being stuck in Penthouse. At last she says Kinjal is just like Anupama. Anupama says to Kavya that they can talk about this inside the house and asks her to not create a mess outside. Kavya asks her to shut her mouth. Samar asks Kavya to talk with respect. She warns Samar to keep his mouth shut. Vanraj asks what she will do if Samar doesn’t keep his mouth shut?

Kavya asks why everybody shows attitude to her only? Vanraj tells Kavya, if she goes on talking like this, she will be shown the attitude. Kavya replies that her only mistake is that she is a normal person unlike other members of shah family. In an irritated tone she calls Anupama as Goddess, Bapuji as great, Shah children as innocent. Kavya says Shah’s house and its members got habitual of a great servant/maid. She says her mistake is that she is not great as well as a maid. Kavya asks Vanraj didn’t he think that she is daughter in law of Shah house when Baa used to humiliate her and called her “maide ki katori”.

Kavya asks if a mother in law continuously gives warnings of physical violence, is it okay? but if a daughter in law gives a befitting reply then everyone gives the daughter in law a lecture. She asks why? Because she isn’t great and sacrificing like Anupama? Kavya keeps on explaining that she tried hard but cannot become a great and sacrificing daughter in law for the Shah family. Vanraj tells Kavya that his family also tried to accept her. Kavya asks Vanraj to explain how and when his family tried to accept her. Kavya tells Vanraj that Samar, Kinjal and Bapuji failed to not love Anupama. She also says that Vanraj and Baa failed to not hate Anupama till now.

Kavya asks everyone to give her either undivided love or hate. She says Anupama has kept her half rights on her things. Kavya tells Vanraj that she has got fed up with Anupama and the Shah family. She also tells Vanraj that other families give love and happiness to their daughter in laws but his family gives her tension and high bp. Vanraj tells Kavya she was desperate to become daughter in law of the Shah family. Kavya says earlier she saw his family dancing and enjoying themselves at functions and didn’t know their real faces. She calls the Shah family a toxic family.This shocks the whole Shah family.

Kavya says that Bapuji always runs away on getting an intuition that a fight will happen in the Shah family. Vanraj shouts Kavya. Kavya shouts it’s true. She says that Bapuji in advance goes away to temple or to meet some friend whenever a fight happens. Kavya says Bapuji should stop his family from fighting but he instead watches it like a world cup from far away. Kavya asks Vanraj why his father got offended when Baa showed her real face and taunted him. She further asks why Bapuji didn’t say anything for years when Baa ill treated everyone in the same way for the last 26 years. Kavya also blames Dolly for creating trouble on her arrival.

Kavya says she hates the Shah family and she made the biggest mistake of her life by becoming the Shah family’s daughter in law. Vanraj replies to Kavya that he too made the biggest mistake of his life by making her the daughter in law of his house. Vanraj says he can accept his mistake of marrying her in front of the whole world. This shocks Kavya to the core. Bapuji wonders why came back to shah house. Kavya asks him the same. This angers Vanraj and he shouts. Anupama asks them to fight inside. Vanraj asks her to let them fight when they already are.

Vanraj asks Kavya to pack now. He grabs Kavya’s hand for packing. Kavya stops him and asks Vanraj to leave if he wants to but she will not go anywhere. Vanraj asks her to not create any drama. Kavya goes inside saying that every drama will end from now on. She returns with some papers and shows them to Vanraj. Vanraj reads them and Anupama asks him what papers are these? Kavya says that she is the new owner of Shah house. Paritosh asks Kavya what nonsense she is talking about? Kavya taunts Paritosh of living in either his parents or in-laws ‘ gifted house.

She reveals that Rakhi helped her to get Shah house on her name. Kavya further reveals that luckily the situation became that Anupama, Dolly and Vanraj transferred their share of Shah house on her name. She calls herself the legal owner of Shah house. Kavya says initially she felt bad but not now. Vanraj calls Kavya a traitor. Kavya says it’s Shah’s stupidity. She calls Shahs emotional fools. Kavya reveals that she used Baa’s anger against Anupama and Anupama’s greatness. Then she used Vanraj’s anger and Dolly’s emotions. At last she made Vanraj recall that instead of insurance papers she made him sign house papers.

Kavya says she is glad that she got Shah house on her name because no one accepted her wholeheartedly. She calls Shahs double standard people. She makes Vanraj realize that he is not either able to live with Anupama nor without her. She tells Vanraj that she even gave her house to Anirudh to marry and live with him. Kavya further tells Vanraj that before marriage he knew that she didn’t want to become like Anupama but everyone since the beginning is comparing her with Anupama. She says nobody accepted her as daughter in law but expected her to fulfill duties of a daughter in law.

Kavya explains to Vanraj that she is not able to make her place in his family because Anupama has never left Shah’s heart or mind. She tells Vanraj he and his family needs Anupama in fights, taunts, love and even in accepting as their daughter. Kavya asks Vanraj why he only cares about Anupama, Anuj, his family and the whole world except her. She says she thought about her as nobody thought about her. Kavya asks everyone to live with Anupama if they like her so much. She also says that she doesn’t care even if Shahs live on the road. Anupama asks Kavya to stop. Kavya asks Anupama how dare she shout at her in her house.

Anupama tells Kavya she did something very wrong. Kavya asks Anupama if there is anybody in Shah house who didn’t do anything wrong. She asks Anupama was it right when Baa used to ill treat her for 26 years and Bapuji remained silent about it. She continues asking Anupama was it right that her elder son and daughter disgraced her always and Samar disgraced Vanraj. At last, Kavya asks Anupama if Vanraj’s behaviour with her was right? Anupama says she and Shahs made mistakes but never betrayed anyone. She calls Vanraj and Kavya cheaters. Anupama tells Kavya that even her children would have given her Shah house in charity if she would have asked once.

In the next episode, Bapuji will explain to Anupama that it was in God’s hand that he sent Anuj in her life but it is in her hands to let Anuj enter in her heart. Kavya will hug Vanraj and apologize to him. Vanraj will think that he will become the same Vanraj for his family’s happiness. He will further think that now the whole world will see who is the real Vanraj Shah. Bapuji will request Anupama to let Anuj enter her heart. Anupama is stunned on hearing this. Keep reading.

Reviewed Rating for Anupama 22nd November 2021 Written Update Startling Drama: 3/5 This rating is solely based on the opinion of the writer. You may post your own take on the show in the comment section below.