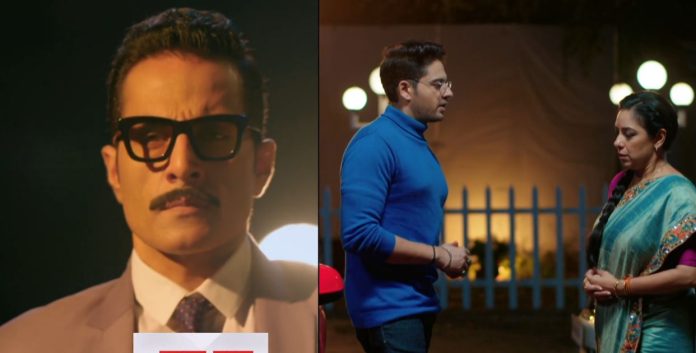 Anupama 23rd November 2021 Written Update Old Vanraj is back Anupama asks Kavya why she cheated everybody. She tells Kavya that even her children would have given her the Shah house in charity. This Statement of Anupama shocks Kavya. Anupama also explains to Kavya that a house without family members can not be considered a home. She asks Kavya how could she cheat her own husband? Anupama taunts Kavya saying that nothing can be expected from her as theft is in her nature be it theft of husband or house. She continues taunting Kavya saying that whatever she got in her life is by stealing. Anupama says to Kavya that she should have at least not cheated her own husband.

Anupama insults Kavya by telling her that she had the chance to make everyone accept her but she chose to steal. Anupama calls Kavya a thief. Kavya says she is not asking anyone to leave Shah house and they can live in her house. Kavya tells Shahs that they are her family and doesn’t need to leave the house. Vanraj tells Kavya that his parents became strangers to her when she insulted them. Kavya explains to Vanraj that fights between a woman and her in-laws can be seen in every house. She also says that people blurt out many things in anger.

Vanraj asks Kavya how will she feel if Baa will slap her and say that people do anything in anger. Kavya tells Vanraj that she would apologize once everyone returns home and everything becomes normal. She says to Vanraj that he always asks her to try becoming a good daughter in law. Kavya asks Vanraj why he never asks his parents to try becoming a good mother and father in law and ignore her mistake. She tells Vanraj that everything will get normal, just house papers will be on her name. She requests Bapuji to please return home, forgetting everything as he will feel good.

Kavya tells Bapuji that she is fine even if he wants to live with Anupama. Vanraj gets angry and asks her how dare she talk to his father like this. Kavya tells Vanraj that to talk like this one doesn’t need any confidence but instead common sense. She asks Vanraj till when they will request someone if that person doesn’t want to live with them. Kavya asks Vanraj to think of the expenses spent on even one person. She continues saying that she doesn’t even have a rich boyfriend like Anuj Kapdia. This statement of Kavya shocks Anupama and Anuj hard. Vanraj asks Kavya if she regrets not having Anuj as her boyfriend?

Kavya ignores Vanraj and asks Shahs to come inside the house. Kinjal asks Kavya to decide if she is a good or an insolent daughter in law. She tells Kavya that she talked so contradictorily in the last 10 minutes that she herself seems confused about what she wants. Kavya asks Kinjal to think and decide about herself only. Kinjal replies to Kavya that she wants to live away from her. Kavya taunts Kinjal and Paritosh asking Kinjal where she will live as her mother has thrown Paritosh out of the penthouse. Kavya angers Paritosh by asking him to show pictures of the penthouse. Kinjal gets angry at Paritosh and tells him that she warned him to not come in her mother’s words.

Kinjal asks Paritosh to stay with his psycho step mother as she can’t live with her. Samar says he will live with Anupama. Pakhi says she too can’t live with Kavya. Kavya asks Shahs to confirm who wants to live in her house. Anupama asks Vanraj to confirm if she should take everyone with herself. Kavya asks everyone to decide and message her as Shah house will remain hers only. Vanraj gets panicked and says nobody will leave his house (shah house). On the other hand, Kavya tries to make herself understand that she didn’t do anything wrong as everyone thinks about their own security too.

Anupama asks Shahs to support Vanraj as he wants to see his family together. She requests Bapuji to understand his son. Vanraj too requests Bapuji. Everyone one by one goes inside the house in a bad mood. Anupama requests God to help her family to stay safe and happy together. Bapuji stops Anupama and thanks her for her support and apologizes to her for leaving her. Anupama asks him to not apologize as the family needs him more than her.

She asks Bapuji to handle Vanraj as she knows the pain of life partner’s deceit. Kavya hugs and requests Vanraj to forgive her. She gives him an excuse for her insecurities. Kavya promises him that she will take care of his family. Vanraj thinks that his and Kavya’s relationship faded just in one year. He thinks he will become old Vanraj for his family’s happiness, whom the whole world will see.

He will request Anupama to let Radha and Krishna come together in the present era/time. Bapuji will indirectly ask Anupama to let Anuj enter her heart. Anupama will agree to go with Anuj and will leave in his car. On the other hand, Vanraj will be seen as old Vanraj and he will decide to equalize everything by doing anything. He will be seen in a suit and coming out of a car opened by someone.

Reviewed Rating for Anupama 23rd November 2021 Written Update Old Vanraj is back: 5/5 This rating is solely based on the opinion of the writer. You may post your own take on the show in the comment section below.