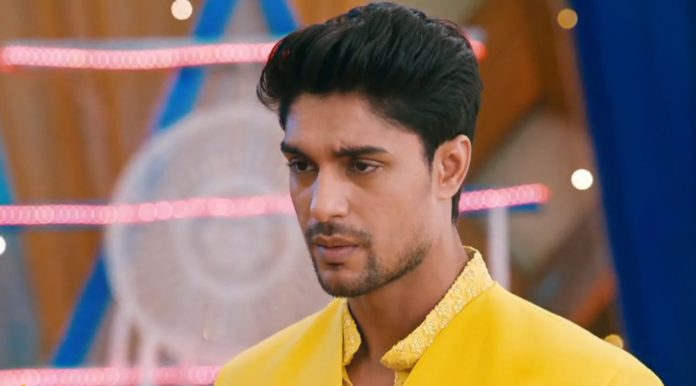 Udaariyaan 23rd November 2021 Written Update Final choice At the Sandhus house, Angad and Tejo enjoy the party in high spirits. Angad feeds the sweets to Tejo. He takes care of her really well. Khushbeer is glad to see a smile on Tejo’s face, but knows that she has no love for Angad. He knows well that both Tejo and Fateh have feelings for each other. He wants Fateh to speak out his feelings for Tejo and stop her engagement with Angad. He so wishes to save Fateh’s life from destruction, from his marriage his Jasmin. Fateh secretly watches Tejo from far. He doesn’t let Tejo know about his presence.

Khushbeer finds Fateh watching Tejo and getting sad, like regret is making a place in his heart. He sympathizes with his son. He asks Fateh what is he looking at. He wants to know if Fateh is really regretting. He tells Fateh that he can still stop Tejo’s engagement and win her back by his love, before it gets too late. He asks Fateh to realize what he lost to get what he wanted. He tells that he might have love for Jasmin, but that love is not worthy enough. He asks Fateh to realize if he left a diamond to pick up a stone.

He tells that maybe Fateh loves Jasmin, but he should soon understand that Jasmin isn’t his love, but his mistake. He tells Fateh that he still has time till tomorrow, if he wants to change his marriage decision. He asks Fateh to think well and decide what he wants in his life. Fateh gets into a big dilemma. Khushbeer’s advice gives him a new hope of getting Tejo back. Khushbeer proves that he is Fateh’s father first and wants his life to get saved, even if he has to bring Tejo back into an undeserving Fateh’s life. Why is Fateh given a choice, when he isn’t at the righteous end? Tejo should be given the choice to decide for her life. Comment your views. Keep reading.

Angad tells them that its Tejo and his pre-engagement party, along with Fateh and Jasmin’s Sangeet function. He tells that her wish is his command. Tejo thanks him. Fateh knows that Tejo can’t see him or anyone sad. He thinks Tejo has deliberately called them to celebrate their Sangeet with everyone. Jasmin gets upset on the insult when the families decide to go away and let them celebrate themselves.The families don’t want to be a part of the Sangeet. Fateh cheers up Jasmin. Angad and Tejo stop the families by their performance and entertain everyone. They don’t let the family members leave.

Angad gets Jasmin and Fateh for the dance as well. Fateh enjoys happily with his family. Jasmin grows insecure when Tejo dances with Fateh. She comes in between them. Tejo also gets mehendi applied, just to get Jasmin’s mehendi function carried ahead. Angad takes care of Tejo. He asks Fateh to feed the food to Jasmin. Fateh also shows his concern for Jasmin. Jasmin tries to show off her love for Fateh. She asks Tejo to write Angad’s name on her hand. Angad tells that it doesn’t matter, when the name is written on heart. Tejo taunts Fateh on hearing this.

Angad asks Tejo not to sound upset. He makes Fateh jealous by acting to romance Tejo. Jasmin wants everyone to just praise Fateh and her love. Fateh excuses himself. He goes away and drinks in sorrow. He overhears Angad praising Tejo for her great efforts. He also knows that Tejo is a real gem, who cares for everybody. Angad and Tejo hide their sorrow behind their smiles. Khushbeer finds Fateh regretting and looking at Tejo with tears in his eyes. He questions Fateh, but the latter denies to have any regret. Khushbeer advises him to change his decision before it gets too late to return.

He asks Fateh to value Tejo. Fateh tells that he really loves Jasmin, so he is marrying her. He feels Tejo and Angad like each other, so they are getting engaged. Khushbeer understands Fateh’s emotions. He calls Jasmin just a mistake made on the name of love. He asks Fateh to rethink. Fateh tells that he loves Jasmin and will only marry her. Khushbeer leaves him to his obstinate madness. Gurpreet asks Khushbeer not to try to change Fateh’s mind, since the latter will never listen to them. Also, she wants Tejo’s happiness, which he finds with Angad.

She tells that even she has accepted Fateh’s decision to destroy himself. Khushbeer tells that he is crying within for his son’s future. She asks him to get happy for Tejo’s happiness, Angad is better than Fateh for Tejo. She tells that Fateh is still blinded by Jasmin’s love. He doesn’t want to leave his hope. The families play a fun game. They enjoy the party more by the well-planned games. Angad gets Jasmin as hs partner for the game. He asks Fateh not to punch him for this. Jasmin teaches boxing to Angad, as a part of a game’s punishment. When Tejo’s turn comes, she goes to Fateh, wearing the blindfold.

Angad brings Tejo and Fateh together for the game round. He asks them to dance together. Fateh and Tejo have a dance together and look really happy. Jasmin is insecure, while their smiling faces give a hope to Khushbeer and Gurpreet. Angad finds Jasmin burning with jealousy. He stops her from interrupting them. He tells that Fateh will just dance on Jasmin’s fingers after the marriage. Jasmin wonders if Angad is helping Tejo win back Fateh. She suspects Tejo and Angad’s intentions, when she finds Tejo getting close to Fateh. Stay tuned.

Reviewed Rating for Udaariyaan 23rd November 2021 Written Update Final choice: 4/5 This rating is solely based on the opinion of the writer. You may post your own take on the show in the comment section below.