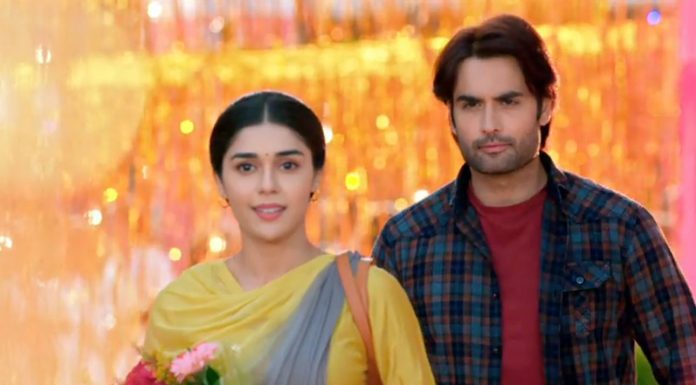 Sirf Tum 24th November 2021 Written Update Suhani’s welcome Ranvir brings the good news home that Suhani topped the entrance exam and got the admission. He tells Sudha that he already told Rakesh about it. Sudha tells that Rakesh told her, Suhani will come from tomorrow. Sudha covers up Rakesh’s lie. Suhani is happy that she got the admission. Sudha gets sweets for Ranvir, that he got such a good news. Ranvir thanks her for the sweets. He tells that every mother cooks the food with love, so its tasty. He makes a leave. Sudha confronts Rakesh for not telling them about the right results.

Rakesh tells that he is Suhani’s father and wants her betterment, she has to obey his conditions if she wants to go there and study. He tells hat Suhani won’t go anywhere else than the college, she will just focus on studies, than friendship and love. He asks her to stay away from Riya and always remembers that she belongs to a middle-class girl. He tells that there will be no guy in Suhani’s life. she doesn’t have to talk to anyone. He clears his terms to Suhani. Suhani agrees to his conditions because her goal is to complete her dreams.

He tells that if he gets a complain about Suhani, it will be the last day of her college, and he will get her married to someone. Ranvir gets the college decorated for Suhani’s sake. He wants to welcome Suhani in a grand way. Sudha drops Suhani to the college. She asks Suhani to live her dreams. She gives a tiffin for Ranvir also. Suhani doesn’t want to meet him. Sudha tells that Ranvir helped them a lot, Suhani is able to study because of him. Suhani tells that Ranvir is really strange. Sudha asks her to say thanks to Ranvir.

She gets surprised seeing the amazing arrangements done for her welcome. Ranvir likes to see her smiling. Ansh hates to see them together. He tells that Suhani has to bear his hatred now, because she has become Ranvir’s happiness. He wants to target Suhani to take his enmity on Ranvir. Suhani is delighted by the series of surprises lined up by Ranvir. She doesn’t know that its his efforts. She thinks the college is really good to welcome the freshers so well. She wants to thank him. Mamta calls Ranvir home and reminds him about the party.

Ranvir tells that he has some work. Mamta asks him not to waste time and come soon. He tells Suhani that he has to go on his mom’s call. She knows the importance of a mother, and lets him go. He tells that they will resume their talk later. Ranvir saves Ansh from falling down. Ansh thanks him. He finds Suhani alone. He tells Rocky that they have to welcome Suhani as well. Ranvir asks his friends to make sure that nobody rags Suhani.

Ansh asks Rishi to make this college a nightmare for Suhani. He tells that Suhani shouldn’t come back to the college again. Ansh tells Ranvir’s friends about Ranvir’s enemies. He takes them for a talk. Suhani gets ragged by Rishi and other seniors. She tells them that they can get punished for the ragging. Rishi tells that its just an introduction. He asks Suhani to dance for them. Suhani refuses. She buys some time to find a way to get saved from them.

Reviewed Rating for Sirf Tum 24th November 2021 Written Update Suhani’s welcome: 2/5 This rating is solely based on the opinion of the writer. You may post your own take on the show in the comment section below.