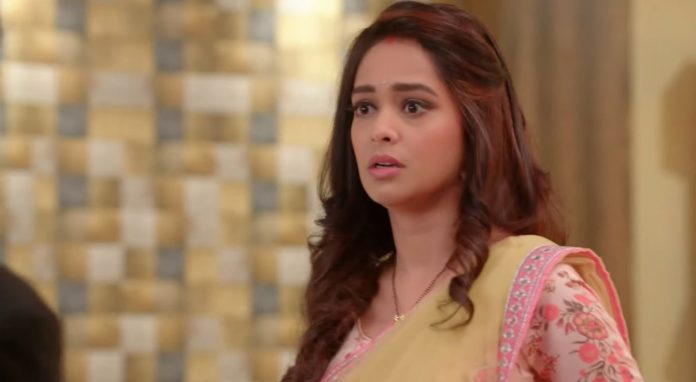 Kumkum Bhagya 25th November 2021 Written Update Pregnancy news Prachi tells Siddharth that she really loves Ranbir and can’t forget him, even if Ranbir has deserted her. She can’t forget their love memories. Prachi tells that its a month now, but still she is at the same point. Siddharth encourages her to accept the truth and forget Ranbir. He feels Ranbir never deserved a girl like Prachi. He exposes Ranbir’s truth to Prachi. He has no faith on Ranbir, after all the latter didn’t trust them and tagged them for having an extra-marital affair. Siddharth tells Prachi that everything was planned, it was a conspiracy to show their relation as an illegitimate one to break off their legitimate relations.

Prachi is shocked by this major revelation. She was cursing herself for the breakup. She fills up with rage on hearing about Rhea’s conspiracy. Siddharth tells that Kohli family wanted to get free from Prachi and him, that’s why they came up with this plan to throw them out of the house by staining their characters. She decides to not fall weak now and make her enemies succeed. Prachi gathers all her courage to fight back. Prachi feels sick and rushes to her room. Prachi grows worried by the sudden vomiting. She asks the hotel staff for the medical kit. She attempts to perform a pregnancy test and clear her doubt. Prachi is shocked by her pregnancy news. The helper congratulates Prachi for the good news, but Prachi doesn’t know how to react.

On the other hand, Ranbir proposes Rhea for marriage. She accepts the marriage proposal heartily, since she is really dying to marry him. Ranbir is shocked by Rhea’s consent. Ranbir decides to marry Rhea and move on in his life. Prachi is also happy to know about Ranbir and her baby. She wants to tell Ranbir about her pregnancy, and their baby. She is afraid that Ranbir will deny her baby as well. Will Prachi let Ranbir know about her pregnancy? Will she be able to prove her innocence? Keep reading.

Rhea shouts on Ranbir. She tells that Prachi has always hurt her, she snatched Pragya, then Abhi and Ranbir, and now her husband Siddharth. She tells that Prachi snatched her love and family. She adds that Ranbir has got occupied with work, but she has no reason to live. She calls him selfish and ignorant. She blames him for getting his life and also her life ruined. She tells that she wanted to have a new start, but she couldn’t. She asks them if they can’t see her pain. She doesn’t want to live, when everyone is cheating her. She tells that nobody loves her, her parents are in coma, she is uselessly living in the world.

She wants to end her life. Ranbir runs after Rhea. She shuts the door and smiles. Ranbir and Pallavi ask Rhea to open the door. Dida asks her not to put the family into trouble. Rhea doesn’t want to listen to anyone. She fakes a suicide attempt. She tells that she will kill herself. The family worries for Rhea. Rhea laughs mockingly. Pallavi swears that she will not let anything happen to Rhea. Ranbir tries to get inside the room from the window. He asks Rhea to open the window. Rhea opens the window for Ranbir and then fakes the suicide attempt. He asks her to put the knife down. Pallavi and Ranbir ask Rhea to listen to them. Rhea tells that her life is ruined, it has become a joke.

Ranbir tells that nobody cheated her. He asks Rhea why is she caring for others, Prachi and Siddharth don’t matter now. He asks her not to end her life. She doesn’t want to listen to him. He asks her to put the knife down and open the door for his sake. Dida asks Vikram to break the door. Vikram gets hurt while trying to break the door. Ranbir and Pallavi rush to see him. Vikram tells that Rhea can harm herself. Pallavi tells that the entire family will go to the jail if Rhea commits a suicide.

Pallavi is scared that the family will get jailed and accused. She blames Ranbir for not listening to her when she asked him to marry Rhea. Ranbir had refused to marry Rhea. She asked him not to give a chance to Prachi and Siddharth to ruin his life. Ranbir promised to show his prosperity to Prachi. He didn’t want to marry anyone. Pallavi tells that Ranbir has to marry Rhea and prove to Prachi that she doesn’t matter to him. She asks what problem does he have to marry Rhea, like he still loves Prachi. She asks him to show Prachi that she means nothing to him. He tells that he has no belief in marriage now.

Rhea opens the door and comes out to talk to him. She tells that she has a belief in marriage relation. She asks Ranbir to marry her. Dida realizes that Rhea is taking the situation in her favor cleverly. Rhea asks Ranbir to either marry her or let her die. On the other hand, Siddharth tells that Prachi should know the reality. Prachi asks him what does he mean. He tells that she will know if the Kohlis deserve her tears or not. She doesn’t want to listen to him. He asks her why didn’t she tell him that Rhea and Ranbir were going to get married.

Prachi tells that when they returned home, Pallavi stopped her from coming inside the house, so she thought Siddharth already know it. He asks why didn’t she tell him that Ranbir left Rhea in mandap and then married Prachi by going against his family. He tells that he left Rhea in the mandap, Rhea was important, but he rejected Rhea, that’s why Rhea attempted the suicide. He adds that Vikram and Abhi’s terms got spoiled, Abhi used to hate Prachi and everything got ruined for her, just because of her marriage with Ranbir. She tells that she felt he knows everything.

She adds that she didn’t wish to disturb his happy married life. He tells that Rhea and his married life never had any happiness, Rhea was behaving strangely with him, he failed to understand her. He reminds her that he had called her to inform about a lady, then they went to the hotel room and got locked there, the room filled up with the smoke and they fainted. She remembers that she had seen somewhere there. He tells that they fainted on the ground, but they were on the bed when they woke up. He tells that Rhea and Ranbir were in front of them. He reminds that it was not a misunderstanding, it was a conspiracy against them.

She can’t believe it. He tells that a lie was shown as truth, when Prachi left from the hotel, he went to the cctv room, he learnt that they were being watched. He tells that everything was planned to show their relation as an illegitimate one. He tells her that this was done to separate them from the family. He feels Kohlis did this to get rid of them. She tells that Kohlis can’t do this. He asks her to think who wanted to separate Ranbir and her. He knows that he got cheated by Rhea. He tells that he met Rhea and tried to explain her the situation, that he just loves her.

In the flashback, he tells Rhea that Prachi is just a friend, he was trapped into the scene. Rhea tells that she knows everything. She adds that she never liked him, she wanted to leave him but she acted to keep the marriage just to get Ranbir back. She tells that Prachi is her big enemy, who snatched Ranbir from her. She reveals that Ranbir and she were going to marry, but Prachi blackmailed Ranbir and married him in the last minute. She explains that Pallavi always wanted to make her bahu, and she disliked Prachi. She adds that Pallavi and Vikram made this plan to make Prachi away from the house.

She lies to him that the masked lady he had seen at the hotel was Pallavi. Siddharth can’t believe it. Rhea tells him that Ranbir had put Prachi and him on the bed, and then framed them. She lies to him about Ranbir and his parents. She tells that they pretended everything, Ranbir had to say bitter things to send Prachi away. She tells that Ranbir and she planned everything and used Siddharth in their conspiracy. She adds that Ranbir and she are going to marry now. She asks him to sign the divorce papers. Siddharth agrees to divorce her. Siddharth believes that it was a drama set up by Kohli family.

After the flashback, Prachi tells Siddharth that Ranbir can’t put up such a drama, he was heartbroken that day and his tears were true. Siddharth tells that Rhea told him the entire truth. He tells that he had seen Rhea and Ranbir close together and happy, but he didn’t notice it in a wrong way, because he was blind in Rhea’s love. He tells Prachi that Ranbir and Rhea never deserved them. Prachi is still shaken up thinking how could Ranbir plot to disgrace her character and end their marriage. Rhea manipulated Siddharth to make him reach Prachi and fill hatred in the latter’s mind against Ranbir. Will Prachi hate Ranbir just as Siddharth hates Rhea? Keep reading.

Reviewed Rating for Kumkum Bhagya 25th November 2021 Written Update Prachi is pregnant: 2/5 This rating is solely based on the opinion of the writer. You may post your own take on the show in the comment section below.