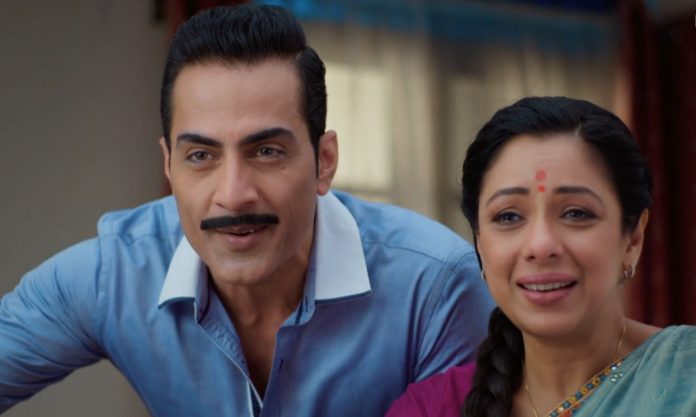 Anupama tells that Leela and everyone can come to her house and stay with her, but she can’t come to the Shah house, Kavya won’t like her visiting. Leela tells that the family is of her, she should come to meet them. Anupama agrees when Leela insists her for the sake of her happiness. Leela tells that she will live if there is a hope of Anupama’s coming. She makes a humble request. Hasmukh is glad that Leela values Anupama. Vanraj gets to see his parents’ love for Anupama. He also realizes Anupama’s worth. Leela tells that Anupama is their good habit. Kavya keeps an eye on them to learn the subject of their conversation.

She doesn’t want Anupama to enter her house. Anupama asks Leela to take good rest and never cry. Vanraj gets emotionally burdened when he sees Anupama taking care of Leela. They make Leela smile. Anupama asks Vanraj to sing a song for Leela and put her to sleep. Vanraj sings their family song on her request. They put Leela to sleep in peace. Anupama tells that she will leave, she will come on one call whenever needed. Vanraj thanks her. She goes out to light the lamp in the temple. Kavya arrives there to humiliate Anupama.

She asks Anupama not to do any such family drama again. Anupama doesn’t accept any filth and returns it back to Kavya by a befitting reply. Kavya asks her to get out, dogs and Anupama aren’t allowed in her house. Anupama tells that board will be a waste of time. Kavya asks her to have some shame, that she is compared with a woman. Anupama tells that she has no shame, because animals are innocent. She adds that she would be ashamed if Kavya compared her with herself. She rebukes Kavya for cheating Vanraj and getting the property papers signed.

She asks Kavya to understand that she got all the relations broken. She doesn’t think Kavya will become Shah bahu by cheat. She advises Kavya to change and accept the Sasural happily. Kavya tells that Vanraj will never leave her, like he left Anupama. Anupama asks her to think of her own life, than playing family politics. Kavya doesn’t want Anupama’s lecture on her career. She is assured that Vanraj will never leave her. She insults Anupama once again.

Anupama doesn’t deter. She tells that she will visit her family, and try to stay away from Kavya. Kavya asks her to leave. Anupama tells that a Bahu makes the house a heaven or a hell. She wishes Kavya gets some sense and makes their house a heaven. Kavya feels insulted by Anupama. She gets revengeful. Vanraj overhears their conversation. He follows Anupama. She recalls Hasmukh’s words about accepting Anuj in her life. Vanraj apologizes to her. He asks her what did Kavya tell her. She hides the arguments from him. He tells that he has no problem with her visiting the family. She feels sorry that Leela had done too wrong with Hasmukh in anger.

She asks Vanraj to forgive Leela if he could. She knows that even Hasmukh will forgive Leela soon. Vanraj tells that he will try. He feels she never claimed the right on the house when Hasmukh gifted her the house, while Kavya claimed the right by snatching it by cheat. She knows that Kavya did too wrong. He tells that Kavya is out of his heart by her misdeed. He doesn’t know where to vent out his frustration. He regrets that he has become a zero from a hero, but he has to become the same hero, the winner once again, instead being a loser. He tells that he will become the old Vanraj and show her. She wishes him all the best to become successful. She leaves for her home.

Later, Anupama and Bhavesh celebrate Bhai Dooj. He tells that he has bought a saree for her. Anupama can’t stop thinking about Anuj. Bhavesh tells her that he saw the same magnet with Anuj, which he had lost in the childhood. Anupama realizes that Anuj has the magnet that she used to play with. She realizes his intense and true love. Next, the Shahs celebrate Bhai dooj. Anupama bakes a cake for Anuj. Anuj confesses his feelings, saying I love you. Anupama is left surprised.

Reviewed Rating for Anupama 25th November 2021 Written Update Epic Vanraj: 5/5 This rating is solely based on the opinion of the writer. You may post your own take on the show in the comment section below.