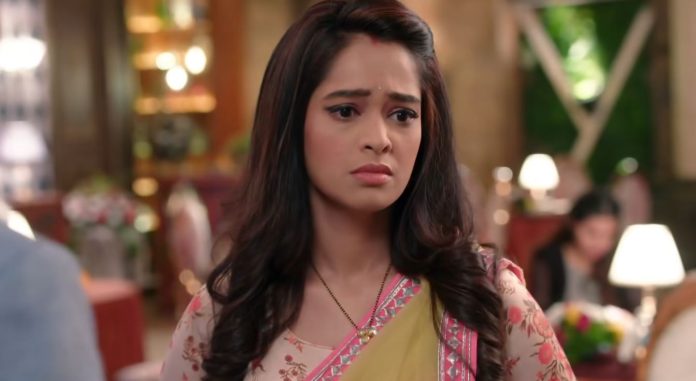 Kumkum Bhagya 26th November 2021 Written Update News for Prachi Prachi is shocked by Siddharth’s major revelation against the Kohli family, who plotted everything evil just to oust Prachi and him from their lives. He tells that Pallavi and Vikram always wanted Ranbir and Rhea to get married, and even Ranbir and Rhea had been seeing each other since a while. He asks Prachi to believe him, since Rhea had admitted the entire truth to him herself. He has believed Rhea and also her evil truth. He asks Prachi to remove Ranbir from her heart, because Ranbir never loved her. Prachi can’t believe that Ranbir stained her character to get rid of her, just to marry Rhea.

She remembers their promises and moments of love. She can’t imagine that Ranbir can stoop to this level to end their marriage. She realize that’s the reason that Ranbir send her the divorce papers. She was cursing herself for the breakup. She fills up with rage on hearing about Rhea and Ranbir’s disgusting conspiracy. She decides to not fall weak now and make her enemies succeed. Prachi gathers all her courage to fight back. Prachi feels sick and rushes to her room. Prachi grows worried by the sudden vomiting.

She asks the hotel staff for the medical kit. She attempts to perform a pregnancy test and clear her doubt. Prachi is shocked by her pregnancy news. The helper congratulates Prachi for the good news, but Prachi doesn’t know how to react. Pallavi and Vikram force Ranbir to marry Rhea, in order to save her life. They get really threatened by Rhea’s fake suicide drama. They think Rhea will kill herself and bring a doom for them. Ranbir has no other way than proposing Rhea for marriage to stop her madness.

Rhea provokes him further to take the step right away. Ranbir goes on his knees and recalls the way he had proposed Prachi before. He gets an aching heart, but goes ahead to propose Rhea for marriage. She accepts the marriage proposal heartily, since she is really dying to marry him. Ranbir is shocked by Rhea’s consent. Ranbir decides to marry Rhea and move on in his life, just for the family’s life. He doesn’t think he can love Rhea ever. Prachi feels connected with the baby in her womb. She appears happy to know about Ranbir and her baby. She wants to tell Ranbir about her pregnancy, and their baby. She is afraid that Ranbir will deny her baby as well. Prachi will be receiving the news of Ranbir and Rhea’s marriage happening. What will Prachi do next? Keep reading.

Dida rebukes Rhea. Rhea tells that she will leave the world. She tells that Prachi doesn’t love Ranbir, but Siddharth. She asks him to realize that he is living with Prachi’s memories, while she is really living with Siddharth. She doesn’t think she has a reason to live. She asks him why id he stopping her from living by letting Prachi live a life as she wants. She tells that Ranbir is forcing her to kill herself. Ranbir tells her that they will prove to Prachi and Siddharth that they don’t want them back, they can’t ruin their lives, they can stay happy without them. He asks her not to care for the society.

He asks Rhea not to let Prachi and Siddharth win by killing herself. Rhea tells that she knows he doesn’t want to marry her. She asks him not to change her decision, she will die and leave from their lives. Ranbir knows the knife away. She picks the knife to threaten again. He proposes her for marriage. Rhea drops the knife herself. He asks her will she marry him. She accepts his marriage proposal. They hold hands and have a hug. Ranbir feels odd to hug her. He asks his parents to make preparations for his wedding. Dida asks him to think again. He goes out and cries. Rhea apologizes to Vikram and Pallavi.

They are happy that everything is sorted. She calls them the best parents. She thanks them for saving her life. Dida dislikes Rhea. Pallavi hugs Rhea. Meanwhile, Siddharth tells Prachi that Pallavi disliked Prachi and wanted to oust her from the house, Rhea wanted to marry Ranbir, Pallavi and Rhea had made this plan to throw her out of the house. He tells that he had come to meet her before and tell this, but couldn’t reach her. He adds that Ranbir isn’t such as she thinks. She tells that Rhea has lied to him, Ranbir can never do so wrong.

She accepts that Rhea and Pallavi can team up against her, but Ranbir can never be a part of such a conspiracy, Ranbir got cheated by his love, he had pain in his eyes, he was heartbroken. She doesn’t doubt Ranbir. He asks her did she not doubt Rhea for once. She recalls Rhea’s odd behavior. She tells that just Rhea had the wrong feelings in her mind, it was one-sided, Ranbir never cheated her. She can’t hear a word against Ranbir. She tells that Ranbir is still her husband, Ranbir also loves her equally, he will admit his love one day. She wants to give time to Ranbir, so that the time heals their wounds.

She knows that everything will get okay between them. She asks Siddharth to go away. She feels unwell. She goes to her room. Ranbir is really sad. He sheds tears. Dida asks him not to marry Rhea. She wants to talk about Prachi. He refuses to talk about Prachi. She asks him not to marry Rhea when she is blackmailing him. He tells that he is marrying for his family’s sake, his happiness doesn’t matter now. She tells that he was seeing wrong when he had the happiness in the form of Prachi.

He tells that Prachi had cleverly deceived them, she had blinded them by her fake love. He asks Dida not to get upset. He doesn’t want to see her crying. She doesn’t want to see him in sorrow. She wishes to fix his life and bring back Prachi. She can’t accept that Prachi cheated him. Prachi goes to the room. She runs to vomit. She asks for medicines. Rhea is too happy thinking she is getting married to the love of her life, Ranbir. She can’t believe it. She thinks her dream is getting fulfilled.

Pallavi finds Rhea dancing in her room. She is glad to see Rhea happy. She wishes Rhea to be happy always. She tells that Rhea has sacrificed a lot in her life, she really deserves this happiness. She informs about the marriage date, that the pandit gave the next day date itself, saying its really auspicious. Rhea pretends sweet and thanks her. Rhea recalls that she had called the pandit and bribed him to tell Pallavi about the closest mahurat. She wants to marry Ranbir as soon as possible.

She tells that she has to invite the guests. She wants to inform Siddharth and Prachi about Ranbir and Rhea’s marriage, so that they get an answer. She wants to tell that her children are happy together and will always stay blissful. She tells that she has to shock Siddharth and Prachi by this news. Prachi performs a pregnancy test. She stays stressed about the result. The staff lady congratulates her for the good news. Prachi is left unresponsive. Keep reading.

Reviewed Rating for Kumkum Bhagya 26th November 2021 Written Update News for Prachi: 3/5 This rating is solely based on the opinion of the writer. You may post your own take on the show in the comment section below.