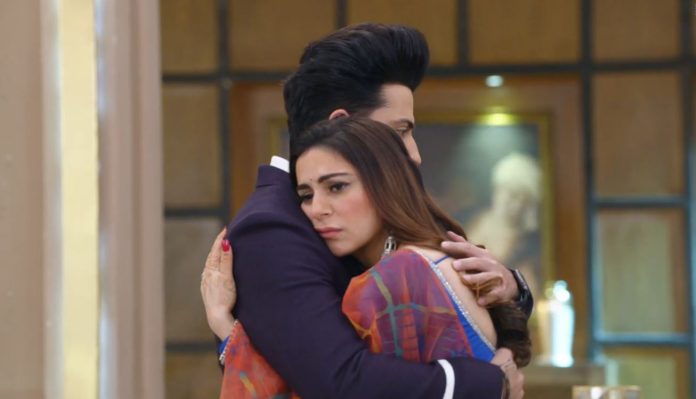 Kundali Bhagya 26th November 2021 Written Update New plotting Karan comes home. Preeta cries in sorrow and hugs him. He asks her what is the matter. She tells that she is tensed about Rishabh. Karan tells that Rishabh spoke to him, Rishabh went to London for an urgent meeting, he is okay. He pacifies Preeta. Sonakshi finds them sharing a hug. She thinks she will be winning finally, she will be soon in Karan’s heart and his arms. Later, Sherlyn goes to the jail to meet Prithvi. He apologizes to her for shouting on her. He tells that he is lucky to get a lover like her, he was cursing himself for being so rude towards her.

He asks her to beat him and vent her anger, but not breakup with him. She wants to tell about Rishabh. He asks her if Sanjana also ousted her from the house. She tells that she isn’t ousted from Luthra house, she is still there. He can’t believe it. She tells that Rishabh didn’t expose her truth and left the house himself. He calls it a big miracle. He asks her how did she do this miracle.

She tells that she scolded Rishabh a lot and challenged his manhood, Rishabh had no courage to look at her and silently left the house. She tells that nobody knows their secret, they can still win the game. He salutes her. He tells that Mahira had ruined her life, and she asked him to ruin Mahira’s life, and he promised her that he will take revenge, he had got Mahira ousted. He asks her to take revenge on Preeta who ruined his life. He asks her to oust Preeta from the house. Prithvi, Sonakshi and Sherlyn, all of them want their revenge on Preeta to make her away from Karan and Luthras. Preeta will be falling into huge danger by their plans. Is Preeran separation close now? Keep reading.

Preeta tells that its good that Rakhi told Mahesh herself. She adds that Rishabh has messaged Karan, everything is fine and they were just overthinking. Pihu tells that she is going out with Preeta. Bani and everyone compliment Pihu. Pihu hurries that she wants to attend her friend Disha’s birthday party. Preeta tells that she will drop Pihu at Roma’s house for Disha’s birthday and then pick Pihu back. The family lets Preeta take Pihu. Sonakshi wants to plan something big so that everything is shattered in Preeta’s life. She doesn’t want to flop her motives. She wants to take Preeta’s place.

She can’t trust Sherlyn and take her help. She decides to execute her plan herself. Preeta drops Pihu at Roma’s house. She asks Roma to take care of Pihu, its the first time that Pihu is attending a party at someone’s house. Roma assures that she will look after Pihu. Preeta asks her to inform her and she will come to pick Pihu. She hugs Pihu and sends her. Preeta returns home. She finds Bani in pain. She takes care of Bani like before. Sonakshi finds Preeta pleasing Bani. She tries to make Preeta fall in their eyes. Preeta gets Roma’s call.

Sonakshi gets Preeta’s phone. She plans an evil plan against Preeta. She answers the call. Roma asks Preeta to come home and pick Pihu. Sonakshi tells that she will come soon. She thinks Preeta doesn’t know about Roma’s call, she will get late and Pihu will cry a lot, the entire Luthra family will scold Preeta. She deletes the call log. She sends a fake message from Roma’s side. Sherlyn asks her what is she doing with Preeta’s phone. Kareena asks her where had she gone. Sonakshi makes a leave. Sherlyn tells that she wants to find out what happened to Rishabh.

Kareena thinks Sherlyn loves Rishabh a lot. She apologizes to Sherlyn on Rishabh’s behalf. Sherlyn tells that she is really worried for Rishabh’s sudden leaving. Kareena feels restless. She asks Sherlyn to sit with her for a while. Sonakshi keeps Preeta’s phone back. Sonakshi tells that Preeta won’t go to pick Pihu for a long time. She asks Bani will she have a glass of juice. Bani tells that she doesn’t want anything. Sonakshi leaves from there. Preeta takes care of Bani. She tells that its time to give medicines to Mahesh. Sonakshi wants Preeta to check the fake message.

She tells that she got his medicines. Mahesh tells that he doesn’t need Karan and Rishabh, until he has his daughter Preeta with him. Kareena tells that Preeta has become his Bahu because of Karan. She asks him to never say that he doesn’t need his sons. Mahesh tells that he made Preeta his daughter before his marriage with Karan. Mahesh asks Preeta not to scold him in front of everyone. Sonakshi returns home with tears in her eyes. She gets scared to tell them the truth. Preeta tells Karan that she has to go and pick Pihu from Roma’s house.

She adds that she received Roma’s message as well. Sherlyn finds Sonakshi scared. Sonakshi thinks she made a big mistake, someone kidnapped Pihu and she can’t even tell them. The kidnappers gang is seen. They don’t want to get caught by the police. Simmi gets Pihu to the dangerous kidnappers. They don’t want anyone to trace them. They make a video of Pihu to send to the Luthras. Preeta doesn’t find Roma’s message in her phone. Sonakshi wants Karan to scold Preeta. Keep reading.

Reviewed Rating for Kundali Bhagya 26th November 2021 Written Update New plotting: 5/5 This rating is solely based on the opinion of the writer. You may post your own take on the show in the comment section below.