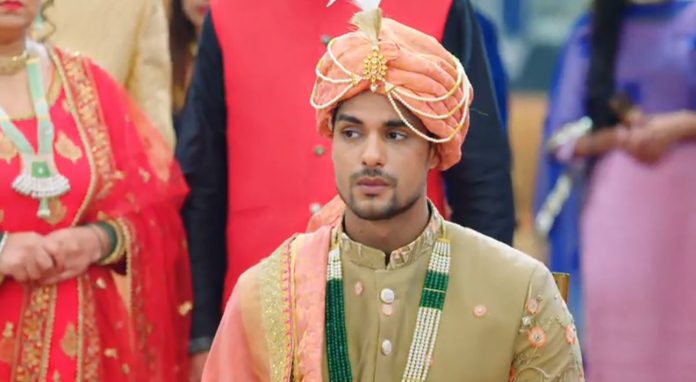 Udaariyaan 26th November 2021 Written Update Major twist Fateh meets Jasmin after coming home and ending her anxiousness. He hands over an envelope to her. She asks him what is it. He tells that its her surprise. He asks her to check it. Fateh and Jasmin proceed with the marriage rituals. Angad asks Khushbeer to tie the sehra to the groom. Fateh waits for Khushbeer to bless him for the marriage. He gets ready as the groom. Angad makes him sit and get the sehra tied by Khushbeer. Khushbeer prays that Fateh gets some sense and doesn’t marry Jasmin. Jasmin is too happy to see Fateh’s surprise, that’s their Canada tickets.

She can’t believe that she will be flying to Canada with Fateh on the next day of their marriage. Fateh marries Jasmin and tells her that their start is really a fresh one, because he still has another surprise for her. Jasmin is really happy to agree to his every word. She tells that she is ready to patiently wait for his next surprise. He makes her wear the mangalsutra. Jasmin shares her happiness with Sweety. She tells about Fateh’s surprise, that he is taking her to Canada tomorrow itself. Tejo overhears their conversation.

She gets sad to know about it, but is happy for Jasmin’s dreams getting fulfilled. Jasmin tells that Tejo can never meet Fateh again, even though Tejo faked the engagement for Fateh’s sake. She laughs on Tejo’s plight. Post the marriage, Jasmin meets Sandhus and mocks them at the time of her Pagphere. Tejo bears the humiliation silently and weeps. What is Fateh’s next surprise? Fateh’s next surprise will be the revelation of the fake marriage he planned to trick Jasmin and expose her truth. There will be major revelations coming out. Keep reading.

Angad holds Tejo’s hand and says he will never leave her hand. Tejo gets emotional. Fateh makes an entry in the house. Angad asks Tejo to smile. Fateh watches her engagement from far and gets too hurt. He cries watching Tejo. Tejo and Angad exchange the rings. Fateh gets depressed. The families get happy for Tejo. Jasmin calls Fateh, while panicking by his absence. Fateh wishes that Tejo always stays happy. Jasmin doesn’t understand how he can be so careless on the marriage day. Sweety asks her not to worry. Fateh meets Jasmin. He asks the girls to let him talk to his would be bride.

Fateh gets sad and thinks of his first marriage. Angad asks him to get ready. Jasmin gets to see Mama and Mami there. She asks them not to do any drama and leave from her function. Swaroop tells that they have come on Tejo’s saying, Tejo called them to bless Jasmin. They don’t have any anger on Jasmin now. Swaroop tells that Tejo called them to do the shagun rituals. She adds that she got the bangles for her. Jasmin thanks her. Swaroop asks her not to worry, her marriage is happening in a unique way. Angad asks Khushbeer to tie the Sehra to the groom.

Bebe tells that Angad is also like Tejo to spread happiness around. Tejo happens to see Jasmin’s pre-marriage rituals from far and wishes her good. Khushbeer ties the Sehra to Fateh and blesses him. Tejo happily cries. She wants Jasmin and Fateh to stay happy in their lives. Nimmo tells that Tejo really has a big heart to love her sister so much. Jasmin is very happy to wear her favorite bangles brought by Mama ji. Tejo thanks swaroop for coming. Swaroop tells that Tejo had completed the shagun for Jasmin. She blesses Tejo. Fateh gets blessed by Gurpreet and Khushbeer.

Angad makes Fateh sit on the horse. He dances in Fateh’s baraat. Sweety asks Jasmin to be happy, that she is marrying Fateh. Jasmin tells that she can’t stay happy until Tejo is around. She feels Tejo will snatch her happiness. Jasmin tells that Fateh is taking her to Canada tomorrow. Tejo is shocked on hearing this that they are going forever. Jasmin shows the tickets to Sweety. Jasmin tells that she is going to Canada with her Fateh. She adds that Tejo will never see Fateh again, they will get separated forever, and Fateh will be just of her. Tejo cries in sorrow. Keep reading.

Reviewed Rating for Udaariyaan 26th November 2021 Written Update Major twist: 5/5 This rating is solely based on the opinion of the writer. You may post your own take on the show in the comment section below.