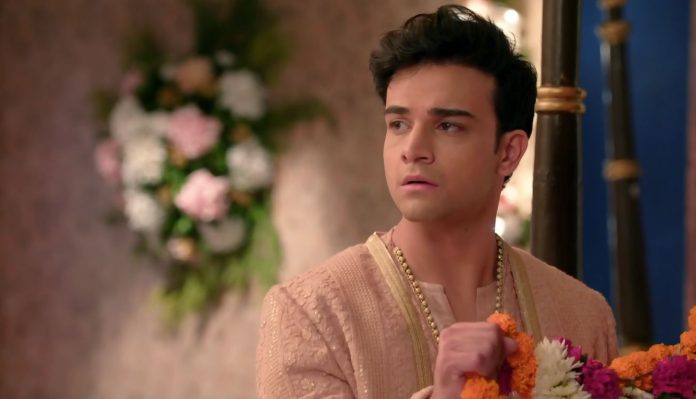 Kumkum Bhagya 1st December 2021 Written Update Prachi meets Ranbir Prachi tells them that the marriage won’t happen, the baby can change a lot of things in their lives. She wants to inform Ranbir about their baby. Rhea boasts of her fate and Kumkum Bhagya that she has Ranbir by snatching him from Prachi. She is glad that she has won Ranbir’s love finally. Prachi decides to meet Ranbir and stop his marriage. She rushes to Kohli house. Prachi enters the house and happens to face Ranbir. Both of them grow emotional.

Moreover, Dida attempts to stop Ranbir and Rhea’s marriage. Vikram asks Dida what had happened. Dida tells that Rhea is blackmailing them for marrying Ranbir. Prachi reminds Ranbir his wedding vows. Ranbir gets restless on knowing about Prachi’s pregnancy. He decides to not marry Rhea. He tells Vikram that he can’t break his promise to Prachi. He adds that he will talk to Rhea and make her understand. He asks Vikram to trust him, Rhea will surely understand his decision. Vikram tries to stop Ranbir. Pallavi hugs Rhea and wishes her for the marriage that’s going to happen. Ranbir leaves from the house in a rush, leaving Pallavi, Vikram and Rhea anxious. What will do Ranbir by calling off his marriage? Keep reading.

Earlier in the show, Sushma tells Prachi that she hates this side of love, which snatches everything from them. She tells that she lost Priyanka and then Pragya who is in coma. She doesn’t want to lose Prachi. She asks Prachi to choose between Ranbir and her. She asks Prachi to never come back to her if she chooses Ranbir. Prachi reminds that Sushma loves her. Sushma tells that she loves her, that’s why she is explaining her.

She threatens Prachi to stop her from going to Ranbir. She asks Prachi if she will choose her Maayka or Sasural. Prachi counts Sushma’s favor on her. She tells that she has to go to Ranbir for the sake of the baby. Sushma tells that Prachi will be going away from her life. Prachi seeks her permission. Sushma ends ties with her. She asks Prachi to never come back if she wants to go to Ranbir. Prachi apologizes to her, and then leaves. Sushma cries for Prachi.

Prachi leaves Sushma and goes to meet Ranbir. Sushma tells Siddharth that she doesn’t know any Prachi from now. He grows worried. Ranbir goes away and cries thinking of Prachi. He deeply misses her. He can’t stop thinking of her. He remembers their old moment from the past. In the flashback, Prachi’s look leaves Ranbir mesmerized. He compliments her sweetly. He proposes her once again. She tells that they got married already. He tells that he wants to marry her again.

She tells that they got married under strange circumstances, she couldn’t dress well in their marriage. He tells that they shall get properly married, she should get decked up. She agrees to plan the marriage functions and get married with elders’ blessings. She promises that she will marry him in Kohli house when his family accepts them. Ranbir misses her in the house. Prachi is worried because of Sushma’s threatening. She calls Ranbir. Ranbir is shocked to hear her voice. He asks is it really her. She tells that she is coming to meet him. She asks him to not marry. He tells that he can’t hear her voice.

She realizes that her phone got off. She wants to reach there and stop the marriage. He thinks he is missing Prachi so much that he got mistaken that its her call. He thinks she is happy with Siddharth. Next day, Rhea wakes up Ranbir and asks him to get ready for their wedding. She is already decked up. She tells that his room will get decorated for their first night. He feels Prachi’s arrival. She asks him what’s the matter that he is looking at the door. He tells that she is coming. She asks him if he is still thinking about Prachi, she will never come back.

Prachi comes there and meets Ranbir. Ranbir stops Rhea from talking. Prachi tells him that she has come back to him. He tells that he was waiting for her return. Rhea asks Ranbir to not trust Prachi. Prachi tells that they love each other, they should solve the misunderstanding and unite back. Rhea is shocked when Prachi convinces Ranbir for a new start. Rhea runs to get Pallavi’s help. Ranbir tells that he missed Prachi a lot, he got engaged in work just to make her memories away. They confess love to each other. They live the moment with a romantic hug.

Pallavi asks Rhea what is she saying. Rhea tells that she has seen Prachi back, Prachi and Ranbir are talking of their union. Pallavi tells that this can’t happen, Ranbir has to just marry Rhea. She goes to Ranbir’s room and drags Prachi outside. She insults Prachi and ousts her. Ranbir asks Pallavi to stop for his sake. Ranbir wakes up from this dream. He shouts to stop Prachi. He sees his wedding sherwani and the note left by Rhea. Rhea wishes him a happy morning and asks him to get ready for their marriage. Ranbir trashes her note.

He thinks Pallavi had informed Siddharth about the marriage, he would have told Prachi surely, but Prachi seems to not care. He thinks if Prachi really moved on. Sushma returns home. She meets Pragya and Abhi. She apologizes to Pragya. She tells that she couldn’t stop and handle Prachi, who is equally mad for love, just like Pragya. She feels Prachi got emotional because of her baby. She gives Prachi’s pregnancy news to Pragya. She feels sorry to say that she broke her relation with Prachi.

She tells Pragya that Prachi has gone to meet Ranbir. She has no strength left now. She tells that she really wanted to save Prachi, but still she failed to stop her from leaving. She apologizes to Pragya for failing to look after Prachi. Prachi is seen running on the road in the pregnant state. She asks the taxi driver to take her to the destination. She struggles and finally hires a cab. She prays that Ranbir waits for her and not marries Rhea. She wants to give Ranbir the pregnancy news.

She is sure that Ranbir will cancel the marriage when she gives him the news. Rhea gets compliments from Shaina. Shaina tells that she is very happy for Rhea. Rhea tells that she has seen her life’s worst phase because of Prachi. She hates Prachi for snatching her family and love. She is glad to snatch everything back from Prachi. She feels she has written Prachi’s fate this time. She tells that she will stay with Ranbir now, she got Ranbir in her fate now. Stay tuned.

Reviewed Rating for Kumkum Bhagya 1st December 2021 Written Update Prachi meets Ranbir: 4/5 This rating is solely based on the opinion of the writer. You may post your own take on the show in the comment section below.