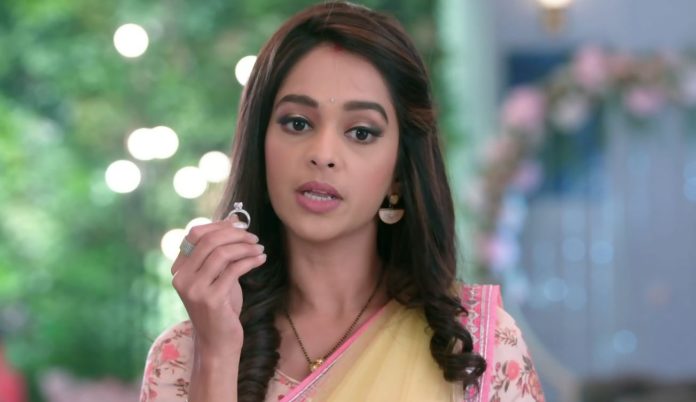 Kumkum Bhagya 8th December 2021 Written Update Prachi wins Pallavi asks Rhea and Ranbir not to care for Prachi and just come ahead for the post marriage rituals. She tells that they have to find the ring from the huge liquid bowl, whoever finds the ring first, the winner between the husband and the wife will have the domination all life. Rhea and Ranbir sit down for the ritual to find the ring. They try to find the ring. Rhea enjoys the ritual until Prachi intervenes. Prachi dips her hand in the water and finds the ring. She tells that she will rule over the family from now, just her domination will prevail.

She wears the ring herself, much to shock Rhea. Prachi proves by her behavior that this time she will not forgive anyone for tampering the relations. She doesn’t want to fall weak emotionally. Ranbir is shocked to see the new Prachi he never expected before.
Soon, Pallavi calls the police home to throw out Prachi. Ranbir stops Pallavi from ill-treating Prachi. Prachi calls the NGO ladies there to take their help. She thanks Pallavi for calling the police, which will be on her side as well.

There is a big drama. Rhea tries to control Ranbir. Ranbir doesn’t want Prachi to leave from the house. He still loves her and wants her back. Rhea does a drama to gain sympathy from the NGO ladies. Prachi claps for Rhea’s outstanding drama. She tells that her sister is good in drama, she always fools others, but she has seen Rhea’s real face. She tells that Rhea has plotted everything to get Ranbir. She doesn’t listen to Rhea. She tells that she doesn’t trust Rhea. The NGO ladies and police support Prachi, who is legally right. Rhea tells that she is married to Ranbir now, she has a right on Ranbir and Kohlis family.

The NGO ladies tell that just Prachi’s marriage is valid. Prachi tells that she didn’t come home alone knowing Kohlis will not accept her easily, so she took the assistance of the NGO. Ranbir still asks the reason that Prachi changed her mind and returned in his life. Prachi doesn’t want to give him the good news of her pregnancy so soon. Prachi wins and gets a place in the Kohli house, but what about Rhea? Will Prachi get Rhea thrown out after proving the second marriage illegal? Keep reading.

Pallavi asks Ranbir and Rhea to find the ring and then know who will dominate. Prachi wants Ranbir to know what all she tolerated. Rhea asks Ranbir not to look at Prachi, but her. She tells that they will have the ring ritual now. Pallavi puts the ring in the bowl. Prachi gets angry seeing Rhea and Ranbir enjoying the ritual. She goes to pick the ring. She tells them that just she will be ruling over the family now. Dida is pleased and supports Prachi. Rhea tells Pallavi that just the police can throw out Prachi from the house. She awaits the police. She scares Prachi and asks her to see the police at the door. Pallavi and Rhea complain about Prachi, who is trying to spoil Rhea’s marriage. Rhea asks the inspector to arrest Prachi. Prachi tells that she is responsible for her fate, she was wrong to trust Rhea and Pallavi.

He wants to know if she also regrets the misunderstandings. He wants to hear the truth from her. He cries and expects Prachi to reconcile with him. Prachi recalls his bitter words. She doesn’t want to apologize and accept the false blames. Prachi asks Rhea didn’t she see her getting married to Ranbir. Rhea also denies it. Prachi asks her why did she perform the suicide drama stunt. She tells that Ranbir wasn’t living in his house since two years, because his parents ousted her. Even Vikram denies that Ranbir was married to Prachi. Rhea tells that Ranbir has married her, not Prachi.

She asks Inspector to arrest Prachi and take her away from their family. Dida testifies to support Prachi. She tells that she had seen Prachi and Ranbir’s marriage happening in the temple. Rhea tells that they can’t believe her statement. She calls their marriage illegal. Ranbir speaks up to support Prachi and tells that it was a legal marriage. Prachi gets happy that he finally spoke in her favor. Rhea asks him what is he doing. She corners him to ask why is he supporting Prachi.

Ranbir tells her that he can’t lie, his marriage has happened with Prachi. Pallavi tells them that the Inspector wants to arrest Ranbir and Rhea. Rhea tells that she will talk to the police. Ranbir wants to talk to Prachi. Rhea doesn’t permit him. He tells that he isn’t seeking her permission to speak to Prachi. He doesn’t listen to Rhea. He goes to Prachi. Rhea tells that Ranbir always switches his emotions when Prachi comes in front of him. Pallavi tells that maybe he had gone to end the matter. Rhea finds Prachi more confident than before. She wonders what reason does Prachi has, that she came back.

Ranbir takes Prachi for a talk. Inspector stops him and questions him about his illegal second marriage. Ranbir tells that he will answer him once he talks to Prachi. Rhea asks Pallavi to stop Dida. Vikram asks Rhea not to tell anything to his mother. He knows that Dida likes Prachi. Pallavi tells that Dida’s affection for Prachi can put them into trouble. He asks her to let the police leave. Pallavi wants Dida to answer them. Rhea tells Shaina that Ranbir never loved Prachi, she actually did some magic on him, she made him believe that he loves her. Shaina tells that Ranbir is still believing the same.

Ranbir and Prachi get into a big argument. He asks her why did she come today. She asks him why didn’t he wait for her. He tells her that he waited for her. They get into an emotional moment. He tells her that he wanted her back. Prachi gets away from him. He still asks her to say the truth, say the reason for her return. She wants her baby to get his dad’s love, but doesn’t tell about her pregnancy. Keep reading.

Reviewed Rating for Kumkum Bhagya 8th December 2021 Written Update Prachi wins: 5/5 This rating is solely based on the opinion of the writer. You may post your own take on the show in the comment section below.