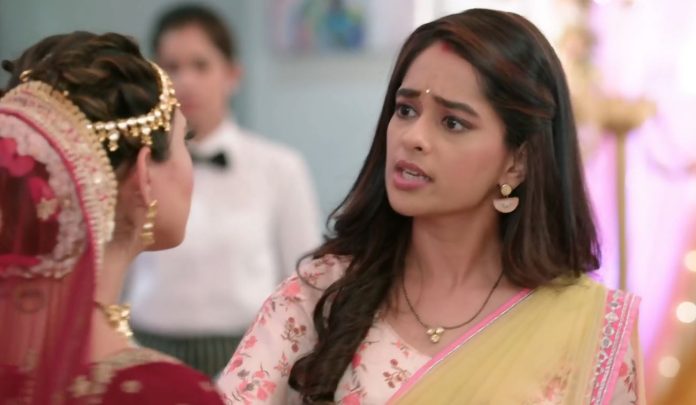 Kumkum Bhagya 9th December 2021 Written Update Rhea exposed Rhea goes mad in anger when Prachi challenges her marriage as void. She asks Rhea to back off and leave from their lives, because she has no right to stay with them now. She reminds that Rhea has broken her marriage with Siddharth and she has no relation with Kohlis now. Rhea tells the police and the NGO ladies that Prachi isn’t Ranbir’s wife, they got divorced much time before and she has the evidence to prove this too. Ranbir is shocked to know about the divorce, before he didn’t sign any papers. He doesn’t understand what is Rhea saying, when he didn’t divorce Prachi. Rhea rushes to get the divorce papers.

Pallavi asks Rhea to stop it, the papers won’t help them, because none of Ranbir and Prachi signed the divorce papers. She asks Rhea to think what will she tell the police about the absence of their signatures. Rhea tells Pallavi that she made the papers for their divorce and now she will sign on it on their behalf. She forges their signatures. Rhea takes the papers to show to the police. Ranbir is shocked to see the papers signed by Prachi. Pallavi lies to him that she had taken his signs much before time. She wants him to believe the family.

Ranbir confronts Prachi about her signatures. He throws the papers at her and asks her to justify now, if they are still married or divorced. Prachi checks the divorce papers in shock. She realizes that Rhea has forced their signatures when she spots the ink marks on the latter’s hand. She catches Rhea’s hand and asks her to show everyone the ink stains when she is supposed to just have the mehendi on her hands. Ranbir is shocked to realize Rhea’s huge plan, while Pallavi worries seeing Rhea caught red-handed. Prachi confronts Rhea for the huge conspiracy to separate Ranbir and her. Will Rhea confess that she forged their signatures? Keep reading.

Prachi asks Ranbir not to misunderstand anything, her tears aren’t of joy or sorrow, but just to show that she isn’t alone. He tells that she was never alone, he just wants to know if she has come back to make a new start. She asks him if he forgot what he did with her. He tells her that he will believe her if she confesses everything and give her another chance. He tells that she can accept her mistake, and maybe he will forgive her. She reminds him what she told her, that she isn’t at fault, she won’t beg him or apologize to him, she won’t accept any wrong blame.

He tells that there is no relation left, she didn’t come back when he calmed down, she didn’t try to reach him. She tells that he always knew that she was living with Sushma. She asks him why didn’t he stop her. He asks her why did she come on his marriage day to say that she loves him. She yells at him and tells that she hates him, she doesn’t love him, she wants to give him the same pain. She tells that when Siddharth told her that Ranbir is going to marry Rhea, she didn’t believe it knowing Ranbir is a one woman man, but he really cheated her and got married to Rhea.

Ranbir asks Pallavi to stop. Rhea stops Ranbir to stop himself. The NGO ladies come to help Prachi in protecting her rights. Rhea asks them t help her in getting her rights. She complains about Prachi, who is claiming her husband. She thanks them for coming on time. She wishes good for the person who called them. The ladies say that Prachi has called them. Prachi tells that she called the NGO for help, police and NGO will help her in saving her marriage. She asks Rhea what will she do now. She tells them that she is married to Ranbir, she didn’t divorce Ranbir, and he can’t marry Rhea.

Ranbir reminds Prachi that she signed the papers, Pallavi has told him in the morning that Prachi and he got officially divorced. Pallavi had lied to him just to prepare him for marrying Prachi. He was refusing to marry Rhea, saying he isn’t divorced to Prachi. Rhea revealed to him that Prachi had signed the divorce papers already. Ranbir was in shock and that’s why agreed to marry Rhea.

He doesn’t remember when he signed the divorce papers. Pallavi lied to him that he had signed the papers in drunken state when he was angry on Prachi’s cheat. He calls it over when the papers are signed. He blindly believes Pallavi and Rhea. Prachi tells that she didn’t sign any divorce papers. Ranbir asks her if she didn’t sign the papers in her senses, that she doesn’t remember it. He tells that they are divorced. Inspector tells her that she doesn’t have any right to stop Ranbir’s marriage if they are divorced. Prachi asks Ranbir to believe her once, she didn’t sign any marriage papers. She requests him with love.

Ranbir seems to fall into her words. Dida knows that Rhea and Pallavi have done something wrong. Vikram tells that the divorce matter will solve the things now. He expects the police to arrest Prachi and take her away. He tells that Ranbir and Rhea’s marriage is legal. He adds that he will show them the divorce papers. He asks Rhea to get the divorce papers. Rhea tells that she has it with her. She goes to get the papers. Pallavi tells that they don’t have any papers with them. Rhea tells that she got fresh papers made instead the spoilt one. Pallavi asks her what will she do, the fresh papers won’t have any signatures.

Rhea tells that she will sign on the papers. Pallavi asks her if she can manage to forge Prachi’s sign as well. Rhea reminds her the day when Sushma came home and threw the divorce papers on her face, since then she had practiced to forge Prachi’s signatures. She tells that she will quickly sign the papers and show it to Ranbir, Prachi and the police. She gets the divorce papers. Rhea applies the thumb impressions as well. She signs the papers. She gets the papers to show them. Prachi still tells that she didn’t sign any papers, marriage is a lifelong relation for her, she will never end her relation, she can get herself insulted, but not insult her marriage.

Reviewed Rating for Kumkum Bhagya 9th December 2021 Written Update Rhea exposed: 4/5 This rating is solely based on the opinion of the writer. You may post your own take on the show in the comment section below.