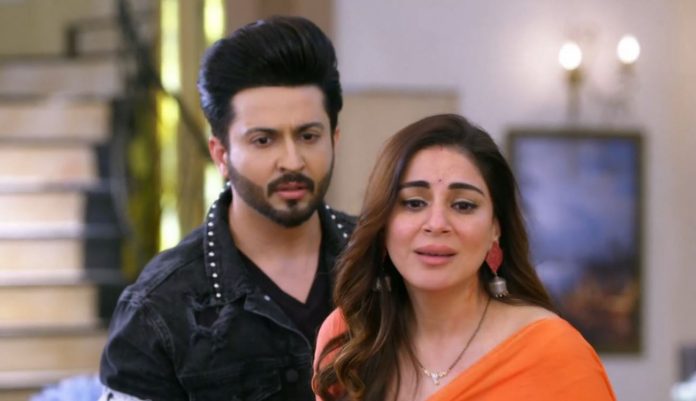 Kundali Bhagya 8th December 2021 Written Update End of Preeran Sonakshi messages Sherlyn that their work is done. Sherlyn releases Simmi to flee. She also heads for home to make this a last day for Preeta. She reaches Luthra family. She acts as a good bahu. They don’t even know that she wasn’t at home. Kareena tells Sherlyn that Sonakshi has found Pihu. Sherlyn tells that she is very happy to know this, Sonakshi proved that she is Pihu’s real mum. She praises Sonakshi who is the best mother. She tells that Sonakshi has given her child to Preeta, but the latter should keep the responsibility.

She brainwashes Kareena and Rakhi against Preeta, who has failed always. She tells that Sonakshi had saved Pihu on the Diwali night as well. She fakes a big drama to sing Sonakshi’s praise and malign Preeta’s name. Rakhi asks Sherlyn how can she compare two toys. Sherlyn tells that Preeta didn’t do anything to find Pihu, she just went to her room and cry, as if she lost a toy. Rakhi asks her to stop it. Kareena asks Rakhi not to stop Sherlyn. She wants Pihu home. Sherlyn tells that Luthras will throw out Preeta today.

Preeta comes home and is stopped by the police. She learns that Shrishti and Sameer are hospitalized in the hospital. Inspector tells that they are finding the kidnapper. She tells that Sonakshi is the kidnapper. Preeta rushes inside the house to expose Sonakshi. She finds Karan and the entire family safe. She tells them that Pihu is safe. She hugs Karan with love. Preeta tells that she is glad to see them fine and together. Karan asks her how did she get hurt. She doesn’t care for her wound. She gets questioned by the family.

Rakhi asks Preeta when did she go out of the house without telling them. Preeta tells that she couldn’t stay back home, she was worried for Pihu, she had to go and save Pihu from the kidnappers, she was helpless to rush. Bani confronts her for getting her own daughter kidnapped. Sherlyn accuses Preeta and tells them Preeta wanted 2 crores to help Sarla save her marriage hall. She tells that she had heard Sarla and Preeta’s conversation. Sarla didn’t ask Preeta any money to save the marriage hall. Sarla was handling the matter alone. Sherlyn manipulates the truth. Preeta has no idea about it.

Sherlyn tells that she can prove it to the family. She calls the banker and asks him about Sarla’s loan. The banker mentions two crores. Sonakshi reaches there to add up another drama. Preeta is shocked to see her back. Preeta tells them that Sonakshi is the culprit, she got Pihu kidnapped, she wants to prove herself a good mother, but she isn’t Pihu’s mother. She reveals that Sonakshi had threatened of killing the family. Sherlyn pushes away Preeta. Kareena asks Preeta not to dare hurt Sonakshi, who got hurt because of her.

Karan asks her to stop it now, he knows the truth. Preeta tells that Sonakshi is wrong, she is a liar. Mahesh also ends his faith on Preeta and asks her why did she do this, he could have give her 20 crores if she asked once, she didn’t need to kidnap Pihu. Bani tells that Preeta would have got her ego hurt if she asked them money. Preeta gets framed by Sonakshi and Sherlyn, too badly this time. Sonakshi asks Preeta to stop hurting the family more. She tells that Preeta couldn’t handle Pihu well, everyone were scolding her for her negligent behavior.

Rakhi stands watching the drama and confused. Karan asks Preeta about Pihu. Preeta asks him why is he talking rudely. Kritika tells that they are scared that she will harm Pihu. Preeta asks them how can they think so. Bani calls it enough of the drama. She doesn’t believe Preeta. Preeta is heartbroken. Bani tells that they have seen and heard the truth themselves. Preeta asks them not to have this misunderstanding. Karan asks Preeta to get Pihu back. He tells that the kidnappers had named her as the mastermind of the kidnapping. What will Preeta do now to make her insane family believe her innocence? Keep reading.

Reviewed Rating for Kundali Bhagya 8th December 2021 Written Update End of Preeran: 1/5 This rating is solely based on the opinion of the writer. You may post your own take on the show in the comment section below.