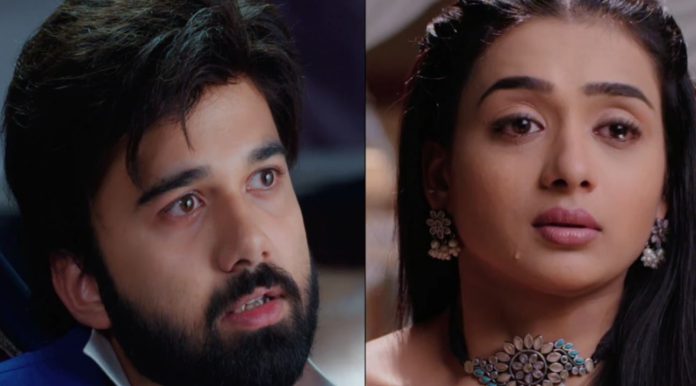 Sasural Simar Ka 8th December 2021 Written Update Painful Simar is lost. She hurts herself when Aarav’s words echo in her ears. She runs on the road until Samar comes to hold her hand and save her. Aarav falls down in Simar’s worry. Samar tells Simar that he is always there to help her. She asks him not to tell her parents anything about her. He takes her home. Reema feels sorry for Simar for the first time. Badimaa asks her to convince Simar for remarriage, and break her hopes of uniting with Aarav. She tells that they have to snatch Aarav and Simar’s reunion hopes, they should never know what they want from each other.

Reema tells Badimaa that she did what she wanted, but she isn’t liking to see Aarav and Simar shattered. Badimaa doesn’t want to know their feelings. She asks Reema to crush down Simar’s hopes and make her away from Aarav’s life. She tells that no ray of hope should reach Simar. She asks Reema to hurt Simar so that she starts hating Aarav’s thoughts. She tells them that she will find a suitable girl for Aarav by taking Simar’s help. She asks Reema to show the pictures to Simar and tell her what Aarav thinks about the profiles.

She tells that Simar will have much pain in her heart, she will hate Aarav and not look back at him, she will soon agree to marry Samar. She asks Reema not to feel guilty, else she can never do this work. She motivates Reema to succeed in the given task and then get the house keys as the reward. Samar brings Simar home. Aditi meets Gagan, just because of her concern for Simar. She asks him to call her when he learns about Simar.

Gagan offers to drop her home. She doesn’t want any help. He accepts his mistake of wronging her and apologizes to her. He tells that he is feeling much guilty. Aditi slaps him and saks him to never remind her the past. She tells that she just came to discuss about Aarav and Simar. Samar takes care of Simar’s wounds. He tells that he is healing her wounds to save her from bigger pain. She tells that Aarav is in her soul, she feels a lot for him, she can’t love anyone else in her life.

She explains that she has tried a lot to come out of the sorrow, but its not possible for her. She isn’t scared to lose herself in love. She knows that even Aarav will ask her to move on, but she isn’t ready to forget him. She asks Samar not to be good towards her, his hopes won’t help him. Vivaan is shocked to see Aarav collapsed on the floor. He asks Aarav is he fine. Aarav asks him to go away. Vivaan asks him not to hurt himself.

Aarav tells that he doesn’t want to talk to anyone. Samar tells that he isn’t seeing what he will get, he is thinking what he wants, after his personal loss, he just wants a motive in life, he also wants to stay happy. Simar realizes his goodness when he closes eyes and applies the balm to her foot. He tells her that he also got depressed after Nisha passed away, but Simar revived his faith back, she gave him a motive to life. He wants to give the same motive to Simar. He tells that they met for a reason, they both shall help each other move on in their lives. He convinces her to consider his alliance, because they are honest about their past.

He adds that they can make a new start and end each other’s sorrow. He asks Simar to take time to decide. He understands the pain she is going through and wants to save her. Vivaan tells Aarav that he will also lie on the ground if Aarav doesn’t listen to him. He tells that Aarav is his hero, who can do the impossible. He asks Aarav to fix his own life and be strong. He tells that they all need him. Aarav asks Vivaan not to cry for him. Simar and Samar share their pain. Samar tells Simar that she has come in his life as a new hope and now he doesn’t have much grief. He tells that their relation is of pain. Simar respects his emotions.

She is thankful that he shared his feelings with her, but she isn’t ready for any new relation in her life. She apologizes to him. He tells that whenever he feels hurt, then he sings to vent out his pain. He asks Simar to channelize her emotions and write a great song to describe her feelings. He asks her to smile. Simar takes his advice. Vivaan tells Aarav that he wants his elder brother back. Aarav doesn’t think its possible, because he is broken down, he is directionless and can’t guide anyone else. He regrets that he lost Simar. He just talks of Simar. Vivaan cries seeing Aarav in pain. Aarav advises him to always have Reema with him and never lose her. Keep reading.

Reviewed Rating for Sasural Simar Ka 8th December 2021 Written Update Painful: 3/5 This rating is solely based on the opinion of the writer. You may post your own take on the show in the comment section below.