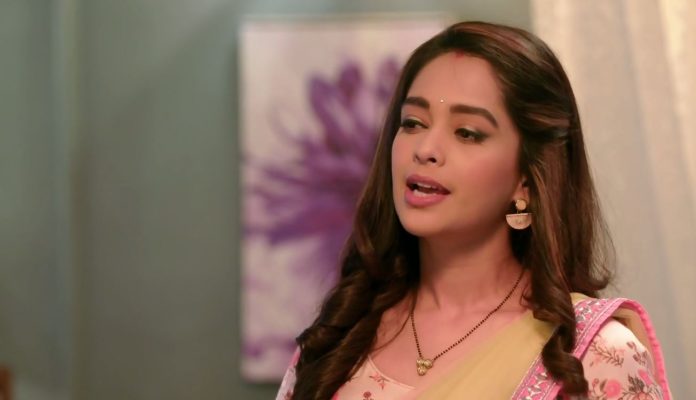 Kumkum Bhagya 13th December 2021 Written Update Bravo Prachi Prachi goes to her room and occupies her old place. She gets upset thinking of the precious moments of Ranbir and her, which got tarnished because of the ugly accusation on her character by Ranbir. She still manages to stay strong. She gets rid of Rhea’s plans, and starts troubling the later. She asks Rhea to come at her service. She stops Rhea home to teach her a lesson. She proves to Rhea that she isn’t the old Prachi now. She gets seated and asks Rhea to get a glass of water for her.

Ranbir tells that if he knew about Prachi’s thoughts, then he would have not done this. Pallavi asks Ranbir not to hurt Rhea so much. She asks him to see what Prachi has done. He tells that he has seen how Prachi misbehaved with her and threatened her, she has come back to take revenge on them, but he isn’t angry on Prachi, but on Rhea, who had forged the signatures. Rhea tells that he didn’t plan to do it. Ranbir tells that he would have got arrested for the fraud, Rhea didn’t think that police could have verified the signatures and caused trouble to them. He asks Rhea to accept her mistake.

He tells that she can’t give any explanation this time. He asks them to let him finish his pending work, if their family drama is over. Pallavi argues with Dida, who had supported Prachi. Dida tells that she just told the truth, Prachi doesn’t need anyone’s support, she has turned strong and proved that she is Ranbir’s wife, on the other hand, Rhea couldn’t prove her lie. Rhea asks what does she mean that Prachi changed. Dida tells that when the people learn the truth, they change, some become a saint and some become a devil. She taunts Rhea. Prachi misses Ranbir in her life. She had blindly loved him.

She feels he has punished her by cheating her, instead her love. She asks how could he leave her by creating such conspiracies. She thinks he wanted to unite with Rhea by cheating her. She feels she couldn’t tolerate the truth when she saw Ranbir filling Rhea’s hairline with the sindoor. Dida is really happy that Prachi has come back home. She had missed Prachi a lot. She knew that Prachi will come back and now she will bring the happiness back. Prachi tells that Ranbir snatched her happiness, he had ended their relation and abandoned her when he had enough of their love.

She is sad that he never kept his promise, he made her fall in his eyes, he cheated her by joining hands with Rhea. She tells that she is much hurt and now she will return the pain to her. She blames him for snatching her love. She tells that she will snatch his happiness now. She doesn’t want to tell him that she is carrying his child, because he has made fun of her love, her identity and relation. She wants him to pay a price for his evil conspiracy. Ranbir reaches the room to get his laptop.

She asks him how did he feel by giving her Kumkum to someone else. He answers that he felt the same as she felt while giving his share of love to someone else. Prachi is hurt by his words. Rhea lands in the guest room. Shaina tells Rhea that Ranbir will be staying away from Prachi, but he is still Prachi’s husband. Rhea tells that Ranbir is her husband now. Shaina tells that everything is in Prachi’s room now. Rhea goes to get her clothes from the room.

Rhea sees Ranbir and questions him about his personal work. Prachi tells that Ranbir and she had a talk about their past. Rhea asks him what was he talking. Prachi doesn’t permit Rhea to enter her room. Ranbir lets them fight and leaves. Rhea tells that she has come to take her clothes. Prachi asks her to take her stuff and leave. Rhea asks her not to act smart. Prachi tells that this room will always be of her. Rhea doesn’t regard Prachi her sister. Rhea claims that she is Ranbir’s wife. Prachi insults her to show where she stands. She asks Rhea to just stay as her Sautan, she can’t become anyone else.

Rhea tells that she had convinced Ranbir for marriage, Prachi can’t do anything. She adds that they are already married now, Ranbir is her husband, the marriage happened in front of the society. Prachi tells that she will change everything because she is back now. She threatens Rhea. Rhea isn’t scared. Prachi counts her crimes. Rhea tells that Ranbir has married her by his will. She knows that Ranbir will not call Prachi his wife. Prachi tells that she doesn’t care about it, she has come back just to punish Ranbir and Rhea. She makes her motives clear to Rhea.

Reviewed Rating for Kumkum Bhagya 13th December 2021 Written Update Bravo Prachi: 4/5 This rating is solely based on the opinion of the writer. You may post your own take on the show in the comment section below.