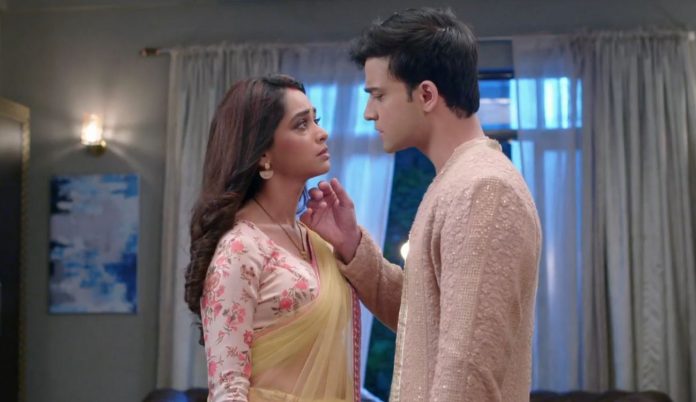 Kumkum Bhagya 14th December 2021 Written Update Pranbir Prachi starts troubling Rhea. She gets into an argument with Rhea after taking her old bedroom back from Rhea. Prachi just wants revenge on the Kohlis for doing wrong with her. She decides to hide about her pregnancy from Ranbir. She gets upset thinking of the precious moments of Ranbir and her, which got tarnished because of the ugly accusation on her character by Ranbir. She still manages to stay strong. She gets rid of Rhea’s plans, and starts troubling the later. She asks Rhea to come at her service. She stops Rhea home to teach her a lesson. She proves to Rhea that she isn’t the old Prachi now. She gets seated and asks Rhea to get a glass of water for her.

Earlier in the show, Rhea tells that she had convinced Ranbir for marriage, Prachi can’t do anything. She adds that they are already married now, Ranbir is her husband, the marriage happened in front of the society. Prachi tells that she will change everything because she is back now. She threatens Rhea. Rhea isn’t scared. Prachi counts her crimes. Rhea tells that Ranbir has married her by his will. She knows that Ranbir will not call Prachi his wife. Prachi tells that she doesn’t care about it, she has come back just to punish Ranbir and Rhea. She makes her motives clear to Rhea.

She asks Rhea to send a glass of water for her. She tells that she will make Rhea do all the things which she didn’t imagine. She orders Rhea to send Ranbir to her room. Rhea leaves in anger. Ranbir goes to help Rhea. Rhea gets happy, while Prachi thinks Ranbir loves Rhea. Ranbir asks Rhea to be careful. He finds Prachi looking at them. Rhea asks Ranbir when is he coming to sleep in the room. Ranbir asks what does she mean. Rhea tells that they are married now, they shall sleep together. Prachi interrupts their conversation. She asks Ranbir to come to stay in her room. She asks them to avoid the confusion.

Ranbir doesn’t want to stay in Prachi’s room. Prachi tells that Rhea is her illegal Sautan. Prachi and Rhea argue for Ranbir. Prachi asks Rhea not to get after Ranbir, she has no right on her. She tells that Rhea is coming between a husband and a wife. She shows Rhea her place in the house. She warns Rhea to stay in her limits, else she will complain against Rhea. She asks Rhea if she will take her husband along. Rhea asks her to stop the drama. Prachi advises her the same. She asks Rhea not to show any right on Ranbir.

Ranbir tells that he will decide where he will sleep. Prachi tells that their fight ended now, they will stay in the same room, she left from his house, not his life, that he had married Rhea. She reminds that she is still his wife. Rhea asks Prachi not to order Ranbir. Prachi tells that Rhea isn’t Ranbir’s wife, her marriage is illegal, Ranbir is just her husband. She tells that Ranbir won’t sleep in Rhea’s room. Ranbir tells that he won’t sleep in Prachi’s room. Prachi asks him why did he marry Rhea. She orders him to sleep in the guest room, not with his legal and illegal wife.

She tells that its a dispute going on, he shall sleep in the guest room, Rhea won’t get any rights on him. Rhea tells that she has a right on Ranbir. Prachi asks her not to interrupt their talks. Ranbir agrees to stay in the guest room. Prachi tells that he is a good husband to listen to his wife. She asks Rhea to go and sleep with the costly jewellery, she will get a good sleep. She locks herself in the room and cries. Ranbir tells Rhea that Prachi has a right to say this, they have this right to Prachi, its not their mistake. He asks Rhea to go and sleep. He goes to the guest room. Rhea gets unhappy with the happenings. She feels Prachi has ruined her life by coming home on her marriage day.

Pallavi gets upset with Prachi’s return. Vikram finds her disturbed. He asks her to stop thinking, bad time stops when they overthink. Pallavi tells him that Prachi is their bad time, she is back to snatch their happiness. She was thinking that Rhea will become their bahu, but Prachi ruined it all, Prachi told Ranbir that Rhea forged her signs, she made sure that Ranbir gets angry on Rhea now, she has broken their relationship. Vikram tells that they did a mistake to not get Ranbir and Prachi divorced.

She tells that they are divorced. He asks her not to talk kiddish like Rhea, if Ranbir and Prachi got divorced then Rhea would have got her rights today. She tells that divorce wasn’t easy. Vikram tells that she should have taken Ranbir’s signatures on the divorce papers, then Prachi would have signed the papers too, Prachi came back on realizing his fake signatures. He tells that the storm had to come. Rhea tells Shaina that Ranbir refused to stay with Prachi. Shaina asks her to keep Ranbir with her. Rhea tells that she doesn’t want a drama at this time, Prachi doesn’t want Ranbir and her to stay together.

She tells that she will not let Prachi succeed. Shaina asks her to do something, Prachi has got the power in her hands. Rhea tells that Kohli family is with her. Shaina tells that Prachi will take the legal benefits. Rhea tells her that Ranbir regards her his legal wife. She shows her mangalsutra. Prachi vents her anger on Ranbir’s picture. She tells that he has given her Kumkum rights to Rhea. Ranbir wonders why did Prachi come home on this day. He thinks she has just come to trouble him, she chose this day just to call him a fraud and embarrass him.

He gets angered on Prachi for her conspired entry. Prachi tries to remove Ranbir’s picture. She doesn’t want to see his face. Ranbir also doesn’t want to see her face. He calls her a liar. Prachi hammers the wall to remove the picture frame. Ranbir thinks she is just trying to trouble him, and then get his attention. He doesn’t want to go to her room and check on her. She continues to hammer the wall. Ranbir goes to see her. He enters the room from the window. He asks her what is she doing. Prachi asks what is he doing in her room. Ranbir asks her not to disturb his sleep.

He tells that her timing is so dramatic, she is doing a big drama. She tells that she has a problem with his picture, she feels like he is laughing at her. He laughs on his life’s tragedy. He reminds that she got this photo frame to see his face in his absence. She tells that he removed her from his life and heart, that’s the tragedy of her life. He asks her not to remove anything from his room, because she will be leaving in few days. He wants his room to stay the same. Prachi doesn’t want to leave him for Rhea to win. Keep reading.

Reviewed Rating for Kumkum Bhagya 14th December 2021 Written Update Pranbir: 3/5 This rating is solely based on the opinion of the writer. You may post your own take on the show in the comment section below.