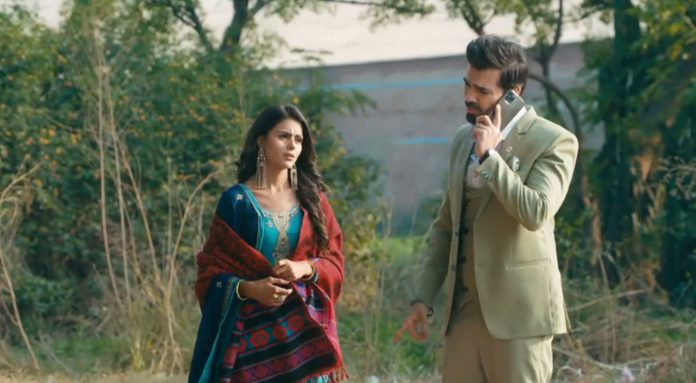 Udaariyaan 19th December 2021 Written Update Riya missing Jasmin learns that Riya loves Tejo a lot. She doesn’t want any happiness in Tejo’s life. She wants Riya to hate Tejo, and even Angad to hate Tejo, after he loses Riya. Jasmin knows how to change Angad’s love into hatred. She tells that Tejo can never stay happy by giving her such a wound of lifetime. Jasmin follows Tejo to the supermarket. She goes to snatch Tejo’s happiness by kidnapping Riya. Tejo gets worried for Riya when she doesn’t find her anywhere. Jasmin lies to Riya and tricks to take her along.

Tejo cries on losing Riya and calls Angad to inform him that Riya is missing. Tejo and Angad get in search of Riya, who is away with Jasmin. Jasmin tries to prove Angad and Tejo irresponsible and careless guardians for Riya, so that Riya’s custody goes to her Nani. She knows that once this happens, Angad won’t be able to forgive Tejo. Will Fateh learn about Riya’s kidnapping and come to rescue? Will Jasmin succeed in her evil motives or get herself exposed in front of Tejo? Keep reading.

Earlier in the show, Sharma tells that Fateh has some pain in his heart which he doesn’t express, he is like running from own self. Angad wants to thank Fateh, but the latter leaves from there to avoid the meeting. Fateh doesn’t want Angad and Tejo to know anything about him. Angad and Tejo take a leave. Fateh watches Tejo secretly. A disguised Jasmin reaches Angad’s house in his absence and finds out about his family from the servant. She learns about Riya, who is very close to Angad and Tejo. She decides to target Riya and take her revenge on Tejo. She can’t see Tejo living happily and in peace. Fateh gets upset that he is away from Tejo’s life because of his blind love for Jasmin. Jasmin swears her revenge on Tejo and works out her plan.

Fateh gets surprised when Buzo comes to meet him. Fateh asks him how did he know that he is in Rampur. Buzo first lies that it was a hearty call and he has arrived to meet his bestie. He later tells that he had heard Fateh talking to someone about Rampur. He tells Fateh that his family is crying in his memory, he should go back home. He regrets to see Fateh working as a driver. He reminds Fateh that he is the Fateh Singh Virk, son of a MLA. He asks Fateh how can he lose his identity for his long repentance. He asks Fateh to stop it now and return to the family. He calls it totally enough.

Fateh enquires about his family. Buzo tells him that his family will forgive him once they know that he has broken his relation with Jasmin. Buzo asks him to forget Jasmin and his past, and stop punishing him. He requests Fateh to return home, but Fateh doesn’t think he deserve to return so soon. Fateh wants to punish himself even more because his sins are too many. He tells that he ruined the family’s name and reputation for his blind love, and also hurt his best friend Tejo’s heart. He feels much guilty. Buzo gets angry on him, and then curses Jasmin who is responsible for all this.

On the other side, Tejo informs Angad that she dropped Riya to her classes. She doesn’t realize that Riya got hid in the car. Riya asks her to take her along to the supermarket, because Angad never takes her anywhere. Tejo is hesitant, and recalls that Angad doesn’t take Riya outside for some reason. She tries to make an excuse, but gives up when Riya requests her. Jasmin follows Tejo and Riya to the supermarket with a plan of kidnapping Riya. She wants Tejo to fall in Angad’s eyes.

She tells that she will snatch Tejo’s every happiness and give her tears of sorrow. Jasmin goes to Riya and lies to her, by showing her doll. She takes Riya with him. Fateh tells Buzo that he doesn’t want to return home and give a hope to the family, he doesn’t want his family to unite him with Tejo when she is moving on with Angad. He wants Tejo to marry Angad and stay happy with him. He tells that he will come back home once Tejo gets married. He gets emotional when Buzo gives him the sweets made by Gurpreet. Fateh recalls his family moment and cries. Buzo also cries seeing his pain. He asks Fateh to come back home soon.

Fateh asks him to promise, he won’t tell anyone about him. Buzo promises him. Fateh just wishes that no sorrow enters Tejo’s life, that she always stays happy. Jasmin talks to Riya and further fools her stating that she is Angad’s friend, Angad has sent her to pick her and bring her to the parking, where he has planned a surprise for her. Riya falls into her words and goes to her car. Jasmin flees with Riya. Tejo looks for Riya everywhere and doesn’t find her. Tejo learns Riya is missing and looks for her everywhere. She panics. She calls home to check once. She learns that the shop has no cctv cameras.

She doesn’t get any help in finding Riya. She calls Angad and informs him how she lost Riya. Angad is in shock. She informs him that she got Riya to the supermarket, but the latter is nowhere. Angad asks her not to worry, he is coming. He runs out of his office to reach Tejo and find Riya. Angad tells that he will not let anything happen to Riya. He suspects if Riya’s Nani took her away. He thinks Tejo made a wrong move by taking Riya outside and putting her into risk. Jasmin lies to Riya and takes her too far. Riya thinks its a surprise from Angad. Tejo and Angad look for Riya everywhere, but fail to find her. Angad angrily sends Tejo home. He doesn’t want to hear anything from her. Jasmin succeeds in creating a rift between them. Stay tuned.

Reviewed Rating for Udaariyaan 19th December 2021 Written Update Riya missing: 3/5 This rating is solely based on the opinion of the writer. You may post your own take on the show in the comment section below.