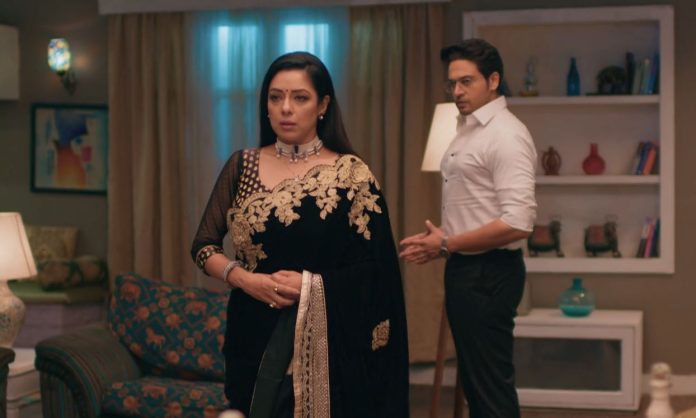 Anupama 20th December 2021 Written Update Anuj conked out Anupama tells Anuj that she didn’t feel bad because he didn’t tell her about Malvika. She says to Anuj that she felt bad because he didn’t even consider her worthy that he could tell her this. Anupama further says to Anuj that she always tells him about all her happiness, sorrows and problems. She asks Anuj, why does he suffer all his sorrows, problems and pain alone by hiding it? She also asks him if she isn’t even worthy of having any right to his pain. Anuj says to Anupama that she is misunderstanding him.

He tells Anupama that he wanted to tell her about Malvika at home only but couldn’t. Anupama asks Anuj, why he couldn’t tell the truth even to his friend Anupama? She tells Anuj that Devika says every friend has full right to his/her friend’s sorrows and problems. Then she asks Anuj why she doesn’t have rights on his problems and sorrows when she gave him all the rights on her problems and sorrows. Malvika takes Anuj with her, interrupting his and Anupama’s conversation. Anupama feels a fear of losing Anuj.

GK apologizes to Shahs for not telling anyone about Malvika. He says that they didn’t know that Malvika would return suddenly. Baa in a taunting tone asks GK, if he and Anuj didn’t know where Malvika was and when will she return? GK says that no one can predict where Malvika will be next moment. Mamaji cracks a joke. Bapuji says it’s something that is troubling Malvika and she always wants to forget and run away from it. GK reveals that Malvika is the most important person in Anuj’s life. He says that they didn’t know that they would meet Malvika after returning to India.

Baa asks if there is any reason for Malvika’s return to India. Paritosh says there may also be a reason behind hiding Malvika’s existence. GK gets tensed with their questions. Anupama witnesses Anuj and Malvika spending time together. Anuj tells Malvika that Anupama cooks delicious food. Anupama suddenly sees Vanraj behind her and gets scared. Vanraj tells Anupama she looks scared and asks her the reason behind it. He tells her that he got shocked too on learning that Malvika is Anuj’s sister. Vanraj asks Anupama to not be scared as Malvika is Anuj’s sister only, not someone else. He predicts that Anupama is feeling bad because Anuj hid Malvika from her, not about their relationship.

Vanraj tells Anupama that he is happy that Malvika will feel comfortable working with him after knowing that Anuj knows him. He further says that Anuj and Malvika are so different from each other and doesn’t seem like they are brother and sister. Kavya sees Vanraj talking to Anupama and feels angry thinking that Vanraj roams like a fly around two women other than her. She thinks that she thought Vanraj would do something big but now it seems that he is going to make some scandal too. Anuj praises Malvika’s business idea and says that it seems Vanraj also has some part in her business idea. Malvika tells Anuj it’s obvious and that is why Vanraj is her business partner.

She asks Anuj to come home with her. Anuj reminds Malvika that her party is still going on. Malvika says to Anuj that she wants to go home because her shoes are biting her. She further asks Vanraj if he will handle their guests and investors? Vanraj agrees to Malvika and says that he knows that Malvika does only what she wants to. Malvika in a friendly manner asks Vanraj to shut up. Baa feels bad with Malvika’s word towards Vanraj. Anuj asks to at least bid bye to everyone. Malvika tells everyone that she is going to live in Ahmedabad only and everyone will have to endure anyhow. She bids bye to Anupama too and takes Anuj away with her. Vanraj asks Anupama if she is fine. He leaves with Anupama’s fine reply.

Kavya comes and makes fun of Anupama’s situation. She tells Anupama that Anuj and Vanraj have one thing in common that they keep their family above their love partners. Anupama tells Kavya that she is proud to be Anuj’s friend, who loves his sister more than anything or anyone. Kavya feels angry and tries to make Anupama feel scared of Malvika’s place in Anuj’s life. Anupama tells Kavya that she will handle her life herself and asks her to concentrate on hers. Kavya asks Anupama by what right she will go to Anuj’s house as now Malvika is there to take care of him. She taunts and asks Anupama to return to her home and live alone.

Shahs discuss that Anuj and Malvika left early as they may want to spend time with each other as they are meeting after a long time. Kinjal says Malvika seems to be a sweet person. By looking at the internet Pakhi says that Malvika is a little weird too as she lives in every country for one month. Baa asks why Anuj and Malvika didn’t tell Anupama and Vanraj about each other’s relationship. Mamaji jokes. Bapuji asks Baa to not feel worried. Samar says he will drop Anupama to Anuj’s place. Baa says they don’t have issues with Anupama staying at Anuj’s house but Malvika may raise an issue.

On the other side, Anuj, GK and Malvika are seen on their way in their car. Anuj sees Malvika’s hands shaking in tension through the rear view mirror. He asks GK if Malvika doesn’t seem weak. GK jokes and asks Malvika what she did? Malvika reveals that she traveled a lot and made each and every air hostess her friends. She also reveals that she is in a social media chatting group of air hostesses. Malvika feels tensed seeing a lot of speeding cars on the road. Their car bumps a little on the road, scaring Malvika to the core. She asks Anuj to drive carefully. Anuj also apologizes to Malvika saying he did it by mistake.

Paritosh says he should not return to Anuj’s house as now the latter’s sister returned. He says he doesn’t know if Anupama would return to Anuj’s house or not. Everyone looks at Anupama with sadness. Malvika, Anuj and GK return to Kapadia house. GK thinks Malvika’s whole life has become a guilt trip. Malvika lies on Anuj’s lap. Anuj strokes Malvika’s hair with brotherly love. Both brother and sister recall their old moments with their parents. Malvika and Anuj continuously talk about their parents. They recall their old memories. Anuj asks Malvika if she would leave him again. Malvika doesn’t guarantee her stay.

She asks GK to give her Anuj’s night suit and bread jam. She leaves giving Anuj a kiss on his cheek. Anuj asks GK if Anupama would return? A bell rings on his door and he thinks it is Anupama. Vanraj looks for a can to return home. Kavya warns Vanraj that she wouldn’t let him fall for Malvika. Vanraj tells Kavya that he now only wants to concentrate on his work. He asks Kavya if he somehow fell for Malvika, what would she do? Kavya tells Vanraj Anuj will not leave him and she too will destroy him. Vanraj tells Kavya that no one can stop him now.

Anupama recalls Malvika taking Anuj away from her. She wonders if Anuj would have taken his medicines before sleeping? Anuj comes from behind and says he forgot. He tells Anupama that even she didn’t remind him about taking medicines. On the other side, Malvika is seen eating bread jam with green chili. She asks GK if Anuj went to meet the saree woman? Anuj asks Anupama why she didn’t return to his home? Anupama tells Anuj that she came downstairs. Anuj asks Anupama why she didn’t come upstairs to his home? Anupama replies she doesn’t know why she couldn’t return to his house.

In the next episode, Anuj will fall in Anupama’s lap. He will cry like a child and apologize to her. Malvika will reach Anupama’s home with GK. She will ask Anuj why he was telling their family’s things to outsiders? Malvika will rudely tell Anuj that she doesn’t like him revealing outsiders anything about their family matters. Everyone will look at each other shocked.

Reviewed Rating for Anupama 20th December 2021 Written Update Anuj conked out: 3/5 This rating is solely based on the opinion of the writer. You may post your own take on the show in the comment section below.