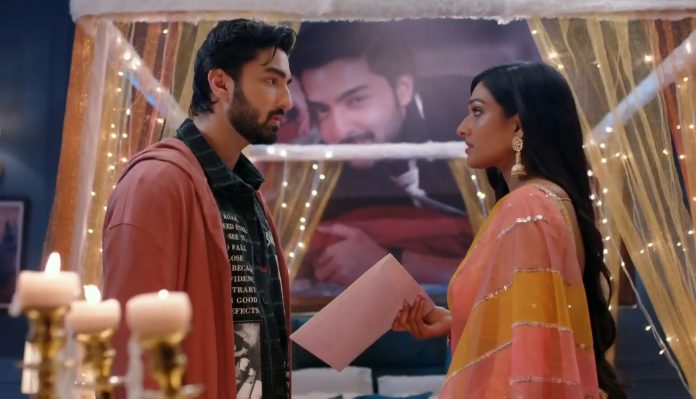 Bhagya Lakshmi 22nd December 2021 Written Update Rishi admits truth Malishka calls a pandit home. She tells that she has made all the marriage arrangements at home. She tells that the marriage should happen today itself. She takes Rishi home. They meet a pandit, who asks Malishka to go and wear a red bridal dress. She asks if marriage can’t happen in western wear. He tells that clothes aren’t any issue, but suggests her to change and come. Rishi waits for her. Later on, Rishi returns home and gets confronted by Lakshmi, who shows him the card and asks him the truth. She asks him why is it written that Malishka weds Rishi. Rishi confesses that its true, and shocks Lakshmi. He apologizes to Lakshmi, and goes away to sit under the heavy rains.

Earlier in the show, Lakshmi goes to get the file. She gets to see the wedding card, which Rishi had hidden there. Pandit lies to Rishi about the rituals. Rishi remembers his marriage with Lakshmi. He gets restless. Lakshmi gets worried seeing the card. Pandit is already bribed by Malishka. Rishi asks her what is happening. Some kids run from there and put the water in the havan kund. The fire is put off. Malishka gets angry on the girl. Rishi remembers Lakshmi’s words. He gets up from his place.

Malishka scolds the girl who came in between. Pandit tells that its a huge bad omen, he won’t do this sin now, he can’t perform the puja against Devimaa’s wish. He leaves. Malishka tells Rishi that he shouldn’t get upset, it was just a small puja, like it happens in his house. Rishi wants to know what’s happening. She gets upset and goes away. She calls the pandit home, and tells that he will have to get Rishi and her married. She asks Rishi to sit in the car. Virender asks Ayush to ask Lakshmi if she got the file.

Ayush comes to meet Lakshmi and ask about the file. He tells that he won’t tell anything about her surprise date. He promises to keep it a secret. Lakshmi is lost. He asks her if he can take the file. He wishes her all the best. Rishi drops Malishka home. He tells that he will go home now. She tells that he can stay back with her. Pandit asks her about placing the havan kund. Rishi asks her what’s happening. Pandit tells that she should wear red clothes for the marriage. Rishi is shocked to hear about the marriage. He takes Malishka aside. He asks her what is she planning, did she want their marriage to happen this way. She tells that this marriage is happening secretly.

He asks her not to drag Lakshmi between them. He calls her lie responsible for their fight. She tells that she isn’t lying to him. She asks him to stop. Pandit asks her to call the groom. She tells that the marriage isn’t happening. She doesn’t understand Rishi’s problem. Rishi reaches his car. He finds Viraj and Dadu coming there. Malishka is shocked to see Viraj and Dadu at the door. She welcomes them. Rishi goes to see them. Malishka sees Rishi at the window and smiles that he has come back. Dadu tells that they will come to meet Kiran and decide the date. He gives her the marriage shagun.

He asks Malishka to wear the dress in her marriage. Malishka accepts the shagun to make Rishi jealous. She asks Viraj to tell the date, she will inform Kiran and fix it. She tells that she will choose the closest date. Viraj asks why is she hurrying. She tells that she wants it to happen soon. She asks him if he is changing his mind. Dadu tells that he won’t fins any other bahu now. Viraj and Dadu take a leave. Rishi gets angered seeing Malishka’s changing colours. Rishi confronts Malishka for the drama. She tells that she gave him a chance, she wanted to marry him, but he stepped back, now she will marry Viraj.

Rishi asks her if she will marry him tomorrow. He proposes her. She tells that she is ready to marry him. She calms down Rishi. She tells that he is possessive about her, he loves her. He feels he isn’t such. He gets angry on her. He tells her that he will meet her tomorrow and marry her. He goes out and cries, sitting near his car. He wants to know what does he want in his life. He shouts that he loves Malishka and always wanted her, now when he is getting Malishka, then why isn’t he happy. He feels burdened by the guilt of cheating Lakshmi. He sits under the rains.

After a while, Rishi returns home only to find Lakshmi waiting for their candle light dinner. He goes to change. Lakshmi stops him and asks him about the wedding card. She asks him to answer her. He tells that its written on the card, Malishka weds Rishi, but its a mistake. He apologizes to her. He tells that he wanted to tell her the truth, that its a mistake done by the printing press guy. He tells that he wanted to help Malishka, he gave the wedding cards order, this sample got an error. He adds that he forgot to give Viraj’s name, so that guy had put his name on the sample card. He asks Lakshmi what did she think that he will marry Malishka. She tells that she really thought so.

She asks how can the man make such a big mistake. He tells that he scolded the man a lot. She starts coughing by cold. She then realizes his wet clothes and sends him to change his clothes. Rishi was worried that his lie will get caught. He tells that Malishka will turn him mad one day. Malishka sees the dress gifted by Dadi. She throws the shagun. She tells that she will be marrying Rishi. She loves him a lot. She boasts of her cleverness that she is making Rishi fulfill her demands. Rishi finds Lakshmi crying. He asks the matter. He asks who has hurt her now. She hugs him and shares her fears of losing him.

Reviewed Rating for Bhagya Lakshmi 22nd December 2021 Written Update Rishi admits truth: 3/5 This rating is solely based on the opinion of the writer. You may post your own take on the show in the comment section below.