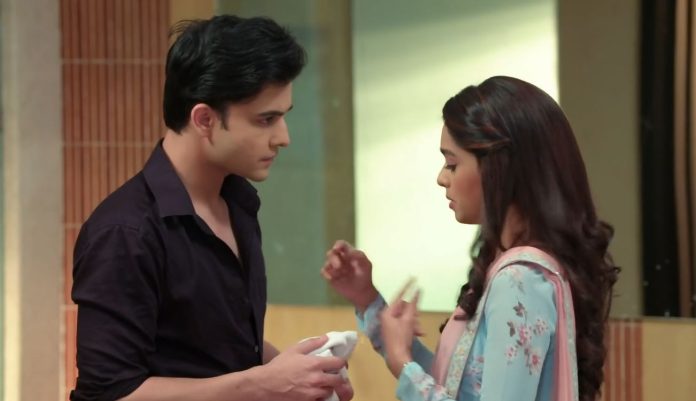 Kumkum Bhagya 22nd December 2021 Written Update Filmi twist Ranbir and Prachi get locked in the washroom, as per Rhea’s plan. Rhea doesn’t know that Ranbir is also locked with Prachi. She tells Pallavi that she is Ranbir’s wife now and that’s why she had locked Prachi in the washroom. Pallavi asks her to stop trying such things and get Prachi out from the washroom. Ranbir and Prachi start arguing. He asks Prachi why did she come inside the washroom, when she was doing okay outside. She tells that she was doing good being out of his life and house, but now she has come inside and won’t go anywhere.

Rhea tells that Prachi is an outsider. Pallavi tells that Prachi will leave the house for sure, but Rhea should get her out of the washroom first. Prachi gets emotional when Ranbir asks her if she has to say something. He asks her to say it, whatever is there in her heart. Prachi gets close to tell him about their baby, just misses to complete the statement because of Rhea. Will Prachi tell Ranbir about her pregnancy? Keep reading.

Rhea and Prachi get into a big argument. Rhea asks her to enjoy as a guest and then leave the house. Prachi asks Rhea to treat her as the guest who is equal to God. She tells that Rhea will be her servant now. She asks Rhea to finish her work. She tells that she will spend some quality time with her husband. She takes the juice drink saying she is the guest, she will enjoy all the good things in the house. Rhea gets upset seeing her behavior. Pallavi asks Vikram to stay at home instead going to office. He asks her why did she keep the event at home. She tells that its Renu’s first wedding anniversary.

He calls it strange that she is hosting the party at home for someone’s anniversary. She tells that Renu is her friend’s daughter, she wants to introduce Rhea and Ranbir as a couple. She wants to show Prachi her real place. She asks him to be at home on time. He agrees to come just for Rhea’s sake. Ranbir gets late for office. He goes for a bath. He looks for the soap. He thinks of going to Prachi’s room and take a bath in the washroom if she isn’t in the room. He goes to the room and doesn’t find Prachi there. He knocks the washroom door and checks. He rushes to take a bath. Prachi comes to her room and finds the door open. She checks the washroom. She realizes that Ranbir has come to use the bathroom again.

She asks him not to get friendly with her. She stays rude. He asks her if the door is stuck. He tells that he will teach her to unlock the door. He tries hard, and realizes that the door is really stuck. Rhea handles the arrangements. Saina calls her and asks what does she want. Rhea asks her to come soon and help her. She shouts on the servants. She wants to go and see Ranbir. Ranbir and Prachi try to open the door. He tells her that she was staring at him. She asks him to try her hand, try to open the door. Rhea comes there to call Prachi. Prachi tells Rhea that she is in the bathroom. Rhea asks her about Ranbir.

Ranbir asks Prachi not to tell anything about him. He shuts up Prachi’s mouth. Rhea angrily leaves from the room. Prachi steps on Ranbir’s foot. She shouts to tell Rhea that Ranbir is also with her. She feels suffocated. He tells that Rhea already left. She asks him to make her leave the washroom. He asks her why did she come inside then. She replies that she won’t go out of his life, when she has come back. Pallavi comes to Prachi’s room, and hears Prachi shouting for help. She asks is Ranbir there.

They rush to the room and ask the man to fix the lock. Ranbir asks them to just help. The man tells that he doesn’t have tools to open the lock. Pallavi helps him with the tool box. Rhea tells Ranbir that she has come to save him. Ranbir tells that he was already inside, and then Prachi came after him. Rhea tells that its Prachi’s plan. She realizes if Ranbir and Prachi locked the door to fool them. Prachi tells Ranbir that she can’t tolerate to be with him. She feels sick and goes to vomit. He asks her is she okay. She asks him not to worry for her. He cares for her. He tells that she will feel better now.

Prachi recalls the past moment that Ranbir always wanted to know about her pregnancy, he was madly waiting for the good news, he wanted their child to come in their lives. She gets touched by his gesture and thinks to tell him about their baby. She stops him. He asks her what does she want to say. She stammers in the emotional state. Rhea and Pallavi get the door opened, and break their moment. Ranbir asks Prachi not to get scared and just complete her statement. Prachi asks Rhea will she still say that Ranbir is her husband. She taunts Rhea that she wasn’t fighting with Ranbir, he was actually caring for her. She doesn’t think Rhea can oust her from Ranbir’s life. She angers Rhea.

Reviewed Rating for Kumkum Bhagya 22nd December 2021 Written Update Filmi twist: 3/5 This rating is solely based on the opinion of the writer. You may post your own take on the show in the comment section below.