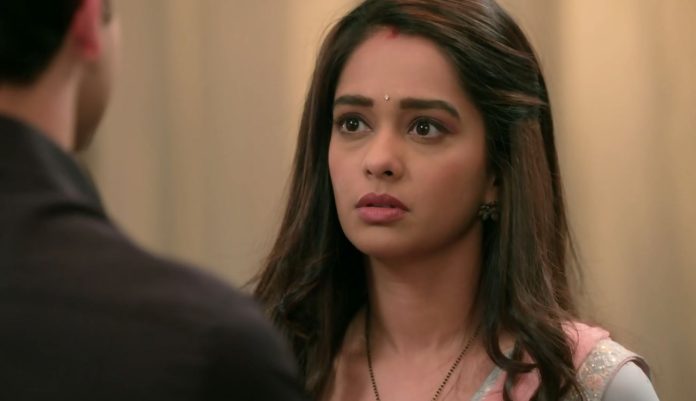 Kumkum Bhagya 23rd December 2021 Written Update Prachi’s love Pallavi orders Ranbir to remove Prachi from his life. Ranbir’s heart doesn’t want to agree with Pallavi. Prachi overhears their argument. She interrupts and tells that she will never leave from Ranbir’s life. Ranbir tells Prachi that he can understand her pain, even though he isn’t known to this feeling yet, he can still see what she is going through. He knows that there is pain in her eyes, its because she still loves him. He tells that she feels when she comes close to him. He also feels the same when he is with her.

Prachi recalls the past moment that Ranbir always wanted to know about her pregnancy, he was madly waiting for the good news, he wanted their child to come in their lives. She gets touched by his gesture and thinks to tell him about their baby. She stops him. He asks her what does she want to say. She stammers in the emotional state. Rhea and Pallavi get the door opened, and break their moment. Ranbir asks Prachi not to get scared and just complete her statement. Prachi asks Rhea will she still say that Ranbir is her husband. She taunts Rhea that she wasn’t fighting with Ranbir, he was actually caring for her. She doesn’t think Rhea can oust her from Ranbir’s life. She angers Rhea.

Prachi taunts Rhea that the latter can never oust her from Ranbir’s life. Pallavi and Rhea get angry on Ranbir. Prachi cries for Ranbir. She recalls his true care in the moment. She doesn’t want to fall weak. She wants Rhea to doubt always that Ranbir still loves her/Prachi. She tells that Rhea will fight Ranbir and distract him from thinking about her. She doesn’t want Ranbir to know about her pregnancy. She tells that Ranbir will get busy in answering Rhea who is too jealous right now. She doesn’t want to think about Ranbir. She knows that she didn’t do right, Rhea will hurt Ranbir by her sharp words.

Pallavi asks him to just remove one of the two wives from the house, and that’s Prachi. She asks him to oust Prachi. She asks him to decide it himself. Prachi looks at them. Rhea tells that she can also claim her rights on Ranbir, she can tell the people that he had proposed her for marriage, it would mean that he lied to marry her. She blackmails him that he didn’t get legally separated from Prachi. Prachi thinks Rhea is selfish to blackmail him, but they both are same. Ranbir tells that he was just taking care of Prachi. Rhea tells him that she will believe him. Prachi thinks he is lying to Rhea.

After Pallavi and Rhea go away, Prachi goes to speak to Ranbir. He asks her why did she tell Rhea about his care, knowing Rhea will fight him. She tells that he really cared for her, he has to answer Rhea. He doesn’t want to get stuck between them. She tells that he brought Rhea in his life. He doesn’t want to fall into her tricks. She tells that Rhea doesn’t trust him. He replies that even Prachi doesn’t trust him. He asks her not to change so much that she becomes like Rhea. He asks if she will hurt him by making fun of his love, his feelings. She calls him heartless, that he doesn’t know about love.

He tells that he can understand pain, its seen in her eyes, feelings are in her heart, and he can know it. He asks her to share her feelings if she wants. He makes her speechless and leaves. She tells that anyone would feel that he is a good person, but he isn’t such good. She just wants to believe her mind, not her heart. Rhea is in trouble when she learns that the helper didn’t arrange any snacks for the guests. She lectures the helper. Prachi learns this crisis. Rhea asks the helper to get a caterer’s number quickly. She asks Prachi what does she want.

Prachi tells that she is confused about her clothes, which colour would Ranbir like on her. Rhea asks her not to anger her with such petty things. Prachi asks her to understand how Rhea did the same things with her and spoiled her image in front of Pallavi. She knows that Rhea had taken an advantage of Pallavi’s liking. She tells that she knew Rhea’s plans well but kept quiet thinking Rhea is kiddish. She adds that she had given importance to their relation, she wanted to protect their family respect, she never spoke against her sister to expose her truth. She counts her favors.

She tells that she has no helplessness now, because they have no relation. She tells that she will insult Rhea in front of everyone and ruin her image. She wants Rhea to understand her pain, what she went through. She asks Rhea to struggle. Rhea asks her to leave. Prachi saves Rhea from falling down. They have a sisterly moment. Prachi tells that she will go and deck up for Ranbir, he must like her, she will come as a showstopper and he will be pleased to see her. She worries for Rhea’s problem. She thinks the party will turn into a disaster if the caterer doesn’t come. She thinks Rhea needs help.

She goes to take Pallavi’s help. She informs Pallavi that Rhea doesn’t know to handle any work. Pallavi asks what does she mean. Prachi hints her and goes. Pallavi goes to ask Rhea the problem and help her. Prachi wants to save the family respect. Rhea doesn’t want Pallavi to know the problem. Pallavi asks her what’s going on. Rhea tells that she is preparing for the party. Pallavi tells that Prachi had come to tell her that Rhea won’t be able to handle the responsibilities of the party. She asks Rhea again. Rhea tells that the caterer isn’t arranged.

Pallavi tells that its Rhea’s mistake, Rhea should have known to handle things. She tells that she will call the caterer. She feels she did wrong to give this big responsibility to Rhea. She tells that the guests will come anytime, she will handle this mess, but Rhea should be alert. She doesn’t want Rhea to get insulted in front of the guests. She wants Rhea to get praised. Rhea apologizes to her. Helper tells that Prachi saved them by informing Pallavi. She asks Rhea to thank Prachi. Rhea orders her to get out. She feels Prachi did that deliberately to make Pallavi scold her. She tells that her plan will completely defeat Prachi. She asks Aaliya and gets the lawyer’s address.

Later, Aaliya and Rhea meet their lawyer and get some documents prepared. Lawyer tells that Prachi and Ranbir’s relation will end without the divorce once she signs the papers. Aaliya asks Rhea to read the papers well. Lawyer asks her to read the clause. Rhea reads the declaration from Prachi’s side, that Prachi is calling her marriage fake and ending it by her own consent. She tells that Prachi won’t win. Aaliya tells that these papers will make Prachi out of the house forever. Rhea tells that they will plan this attack in the party itself. Keep reading.

Reviewed Rating for Kumkum Bhagya 23rd December 2021 Written Update Prachi’s love: 3/5 This rating is solely based on the opinion of the writer. You may post your own take on the show in the comment section below.