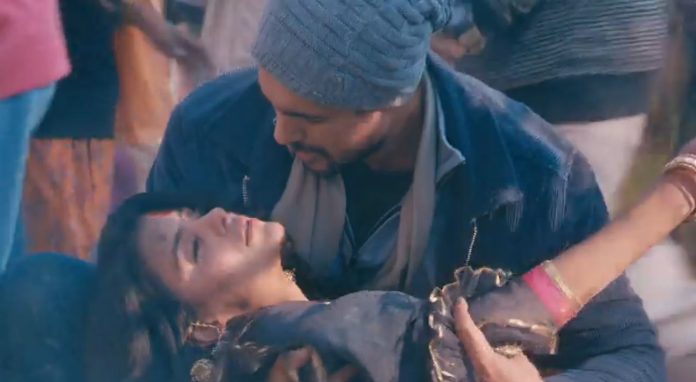 Udaariyaan 22nd December 2021 Written Update Fatejo finally Jasmin finishes her meeting with Riya’s Nani and returns to the hotel before the riots begin. She sees the riots from the hotel room window and thinks she can’t go out in this situation. She is tensed seeing the angry crowd’s havoc. Fateh looks for Tejo after reaching the riots affected market, where he heard about Tejo’s visit. He wants to find her and protect her before anything wrong happens. Fateh finally finds Tejo, but realizes that he got too late, when he sees her getting hit by the angry mob. Tejo gets hit on her head and faints down. Fateh is really left in fear when he finds her in danger. He screams out and runs to her.

Fateh’s call for Tejo gets heard by Jasmin, who is in disbelief to see the lovers meeting between the riots. Fateh holds Tejo in his arms and cries seeing her wounds. Fateh protects her and takes her out of the riots, away from the attackers. He puts her on a cart and runs to reach the hospital. He keeps talking to Tejo on the way, but she isn’t able to see or hear Fateh. He tries to bring her to consciousness, without thinking about his identity getting known to her. Will Tejo see him this time, as he is her savior? Keep reading.

Earlier in the show, Angad goes to meet Sharma, while Tejo goes to the hotel to find Jasmin. Fateh hides from Angad, and acts ill to stay away. Tejo informs Angad that she is going to the market for shopping, she will handle it alone. She doesn’t want to tell him anything until he finds the girl. Tejo reaches the hotel area and looks for Jasmin, while Sharma sends Fateh to the same place to buy some stuff for Angad. Fateh learns that the riots picked up in the market area where Tejo has gone. He worries for Tejo and reaches there. Will Fateh and Tejo meet this time? Keep reading.

Tejo gets badly trapped in the riots. She gets injured by the angry mob. She falls down, but doesn’t give up. She tries to get up and run away from there. Fateh reaches there in search of her. He gets worried for Tejo. Tejo sees her bleeding wound. She tries to get some help for herself, but in vain, because Fateh reaches her late. Tejo goes to help a little boy stuck in the riots, without thinking of her own pain. She tries to stop the madness. She makes the boy reach his mother. Jasmin has to go and meet Riya’s Nani. She doesn’t care for anyone’s life, but just wants her way to get cleared.

She speaks to the lawyer and tells him that she will soon meet Varun and do her work of framing the latter. She wants to earn money to enjoy a lavish life, no matter what medium she chooses. Fateh finds Tejo getting attacked by the angry people. He runs to her rescue, but till then she passes out. Fateh proves his love for Tejo once again by saving Tejo and rushing her to the hospital with much difficulty. He stays with her all the while until he sends her for the treatment. Angad learns about Tejo and rushes to the hospital to see her.

Its a worthy scene to watch, how Fateh makes Tejo reach the hospital by all his efforts. Fateh loves Tejo a lot, and just wishes her happiness. He doesn’t think Tejo has seen him in her semi-conscious state. Tejo has seen him and also felt his touch, when he took her in arms. She is sure that Fateh has saved her life, while Fateh tries to hide his identity from Tejo and Angad again. Tejo wants to find out if her intuition and beliefs are right. Fateh wants to go away from her life, and leave her to stay happy with Angad.

Fateh regrets the past, that he has hurt Tejo a lot. He doesn’t want Tejo to lose her life. He worries for her life, as his own life. He prays for her recovery. Fateh wishes that she gets his life years as well, but stays well. He doesn’t care for his own wounds, and stays waiting for Tejo’s recovery news. Angad is also much worried for Tejo. He also wishes the best for her. Fateh and Angad pray for Tejo. They both want her happiness and well-being. Fateh stays away from Tejo, while Angad stay with her in the ward. Angad learns about the kind man who saved Tejo. He goes to thank Fateh.

Fateh hides his face once again when Angad hugs and thanks him. Angad feels like he knows him, but Fateh doesn’t answer anything. Angad learns that Tejo has got conscious and runs to see her, while Fateh follows him to see Tejo. Angad meets Tejo, who is thinking about Fateh. She asks Angad if Fateh has saved her life. Angad tells that Fateh would be with Jasmin in Canada. He jokes to make her forget everything and laugh. He tells her that he will never let her forget their fake engagement. He expresses that she is his life.

Fateh is happy to see them happy and together. He just wishes Tejo to be smiling always. Tejo is still doubtful that her savior was Fateh. Angad also gets doubtful after hearing her word. Fateh goes away while praying for Tejo, and gets into a close hit and miss with Jasmin. Jasmin doesn’t want Riya’s Nani to tell Angad about her, else her plan would fail. She so wishes to take her revenge on Tejo and Fateh soon. Fateh’s identity gets disclosed in front of Angad. Stay tuned.

Reviewed Rating for Udaariyaan 22nd December 2021 Written Update Fatejo finally: 5/5 This rating is solely based on the opinion of the writer. You may post your own take on the show in the comment section below.