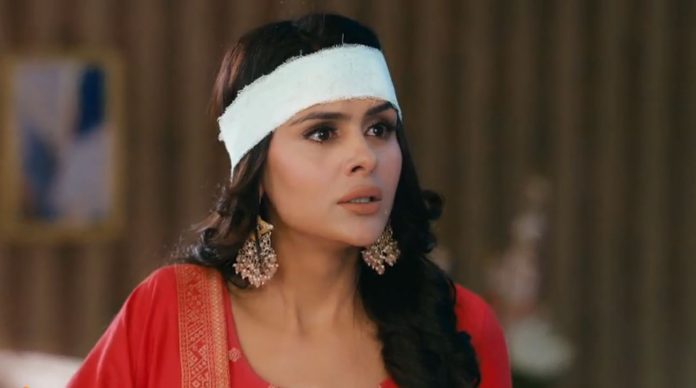 Udaariyaan 24th December 2021 Written Update Run for love Angad comes home after meeting Fateh. He meets Tejo, who rushes to him to tell about Riya’s Nani. She has an important matter to share, but Angad too has a big news for her. He asks her to listen to him first. He tells her that the person who saved her in the market was really Fateh, she was right that she had seen Fateh around. Tejo is shocked to know this. She tells that Fateh would be with Jasmin in Canada. Angad tells her that Fateh never married Jasmin and never went to Canada with her, he is in the village living an isolated life just to repent his mistakes.

He further adds that he just went to meet Fateh at Sharma’s house, where Fateh is working as a driver. Tejo is shocked to know this. She runs to meet Fateh without listening to Angad further. Angad asks her to listen to him first. She runs for her love and gets unstoppable. Tejo leaves Angad’s house just for Fateh. Angad watches her leave by making a decision to meet Fateh, and leave him/Angad behind. Angad sacrifices his love and unites Tejo and Fateh. Is this Angad’s dream or will he really take this step, knowing he will lose Tejo forever if he tells her about Fateh? Keep reading.

Earlier in the show, Angad tells that he will really marry Tejo if Fateh steps back. Fateh loves Tejo, but doesn’t admit in front of Angad. He makes a sacrifice of his love, but Angad still understands Fateh’s love, since Fateh couldn’t stay away from Tejo when he saw her in danger. Angad thinks of uniting the couple, while Jasmin plans to separate them. Meanwhile, Tejo speaks to Khushbeer and Gurpreet after a long time, who ask her to marry Angad soon. She makes excuses to avoid the marriage talk. She can’t tell them that she still loves Fateh, he is the only person in her heart. Tejo cries for Fateh.

Angad asks Fateh if he wants Tejo in his life. Fateh tells him that he doesn’t want Tejo, but just her happiness which lies in Angad. He adds that he could just give her sorrow and pain, while Angad has given her happiness. He doesn’t want to hurt Tejo more. He asks Angad to take care of her. He asks to keep his presence in Rampur a secret. Angad tells that its not possible because the city is a small place, Tejo can encounter Fateh anywhere and then her past will come into her present and her wounds will get revived. He asks Fateh to go somewhere too far to get seen by Tejo.

He asks Fateh to take his help and join one of his business if he wants. Fateh doesn’t accept his help. He tells that he will handle things himself. He just requests Angad to marry Tejo soon. Angad tells that even he wants this to happen soon. He shows Tejo’s call to Fateh and leaves. Tejo keeps calling Angad and awaits him home to tell about Riya’s Nani. She grows tensed, while Angad is super worried to hold such a big secret in his heart. He knows Tejo just loves Fateh. He doesn’t know what to do, to tell the truth to Tejo or not. He fears of losing Tejo forever.

Angad arrives home and finds Tejo waiting for him. He tells that she really looks like his real wife to care for him so much. She asks him not to joke all the time. He thinks of telling her about Fateh. He tells her that Fateh is here and he saved her life. He tells that this truth is her right and really important for her to know. He tells her that Fateh didn’t marry Jasmin, it was just a drama to punish Jasmin for her sins, Fateh is the one who saved Tejo’s life, he is living in Rampur and working as Sharma ji’s driver.

Tejo is shocked to know this. She runs to meet him. She leaves from the house to meet Fateh once. Angad is left alone and sad. Tejo soon reaches Sharma’s house and meets Fateh. They both have a moment of union when she cries and runs to find peace in his arms. She hugs him and leaves him stunned. She is relieved to know that he didn’t marry Jasmin and saved his life in time. They both cry happily. She asks him why didn’t he tell her that he is in Rampur. She asks why didn’t he meet her once and know her feelings. She tells him that she loves him and wants him back. He also confesses his love to her.

They both share their love confessions, and then he thinks of Angad, who also loves her. She tells him that Angad will understand even if he loves her, he will move back from their way and never separate them. She praises Angad who is a gem at heart, he is just a good friend who faked the engagement with her on her saying. She tells that Angad will unite them. She asks him not to worry for Angad. She asks him if he still loves Jasmin. Fateh tells that he just loves Tejo, he is really happy to get her back. They both express happiness and hug, while Angad watches them. This happens to be Angad’s dreams.

He lies to Tejo and doesn’t tell about Fateh. He feels guilty and doesn’t think if Tejo wants him to sacrifice his love. He thinks if he is a bad person to hide someone’s truth and separate the lovers. Angad gets into a dilemma, just like Fateh who also thinks to leave far away for the sake of Tejo’s happiness. He wishes Tejo stays happy with Angad.

Reviewed Rating for Udaariyaan 24th December 2021 Written Update Run for love: 5/5 This rating is solely based on the opinion of the writer. You may post your own take on the show in the comment section below.