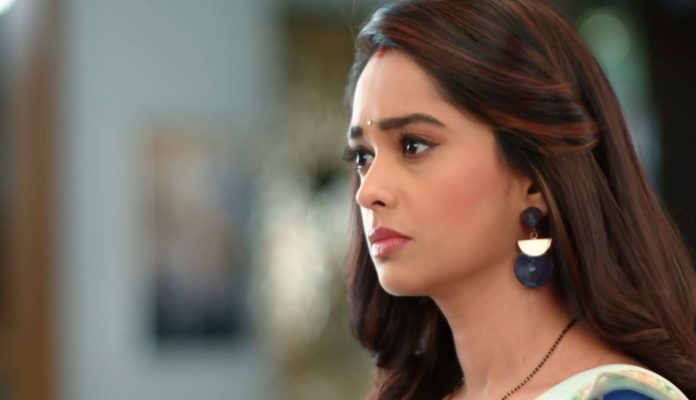 Kumkum Bhagya 4th January 2022 Written Update Prachi shoots back Rhea tells Prachi that the latter signed the papers which made her lose the rights on Rhea. She adds that its proved now that Rhea is Ranbir’s legal wife. Prachi asks Rhea to get ready and accept her defeat, because Prachi Ranbir Kohli is back in her life, now the things which never happened till now will begin to happen. Rhea gets angered when Prachi dismisses the papers. Prachi is in no mood to withdraw her rights on Ranbir and wants Rhea to understand this. She hopes Ranbir stands by her this time. Will Ranbir remember about Prachi’s pregnancy truth? What will be the consequences of Rhea and Prachi’s clash? Keep reading.

He tells that he will get the real fire. He asks her to wait. He gets a pot and burns papers to ignite the fire. He shows the chunri brought from the temple. She tells that Mata rani has sent it for her. He adorns her with love. He makes her wear the special chunri. They both are still intoxicated. He gets a cloth for gathbandhan. They prepare for the marriage. Rhea comes there and watches them together in shock.

Ranbir and Prachi get married in the intoxicated state. He plays the mantras on the phone. He burns the papers to ignite the fire. Rhea is shocked seeing them marrying. She asks them to stop it. Prachi goes to the window. Ranbir asks who has come. Prachi tells that Rhea is the enemy of their love. Ranbir burns the documents to put in the fire pot. Prachi tells him that Rhea has come to stop their marriage. Ranbir tells that nobody can stop their marriage now. Rhea asks them to listen once. Ranbir burns the important documents in the fire. He holds Prachi’s hand and makes vows while taking the rounds. Rhea shouts stop it.

Pallavi and Aaliya, Dida and Shahana, hear the mantras sound and run to Ranbir’s room to see. Rhea tells Ranbir that they are married, he is her husband. The family members are shocked to see the marriage happening. Dida and Shahana are really happy. Dida blesses Ranbir and Prachi. Pallavi tells that Rhea and Ranbir are married. Dida tells that Prachi is his first wife. Shahana taunts Rhea. Aaliya asks them to stop the marriage. Shahana tells that their love has united them, nobody can stop them. Rhea tells that Prachi and Ranbir are drunk, they don’t know what they are doing. Rhea argues with Shahana.

Dida taunts Rhea who doesn’t know love, but just hatred. She tells that love always survives. Aaliya and Rhea warn Prachi to stop her. Ranbir and Prachi make a vow that they will face all the problems together. They share a romantic hug. They then leave from the room. Dida blesses the newly weds. She tells them that they will be happy together, there is no doubt in it. Rhea asks Dida to stop it. She tells that they don’t need a blessing, but a lemonade. Prachi calls Rhea an illegal Sautan and asks her to leave. She rebukes Rhea, making Ranbir laugh. Aaliya gets angry seeing Prachi insulting Rhea.

Prachi tells that a person speaks the truth in the drunken state, they have done right, they got married and now she got her husband back. Ranbir tells Rhea that she should understand what Prachi is saying. He declares that just Prachi is his wife, he will sleep with his wife in his room, Rhea should go out and not disturb them. Prachi tells that Rhea always talks nonsense, like she is always drunk. Ranbir laughs. Rhea gets enough of the insult. She goes away. Prachi asks Pallavi to accept her as Bahu. She wants Pallavi to bless her. She tells that its risky to trust Pallavi.

The cute couple mocks Pallavi and Aaliya also. Their madness angers the elders. Pallavi and Aaliya also lose patience. They also leave. Prachi hugs Shahana for always being with her. Ranbir asks Shahana to fulfill the rituals for them. Ranbir and Prachi fall asleep. Dida wishes that Ranbir and Prachi remember their marriage. She tells Shahana that they will put Ranbir and Prachi on the bed and make them assume about their wedding night, then they will get inseparable. Vikram asks Pallavi about the party. He asks why is she so tensed. Pallavi tells that she can’t be happy when Prachi is at home.

She tells that Rhea cheated Prachi and took the latter’s signs on the guilt admittance papers, Prachi confessed that she never married Ranbir. She adds that Rhea took Prachi’s signs on the divorce papers too. She knows its wrong, but she is helpless to marry Rhea. She justifies herself. She tells that Prachi will create such drama every day, they have to save their family from destruction. He calls it a right move. He understands her point of view. He knows that she is right and justified in supporting Rhea. He asks her to relax. Aaliya asks Rhea not to panic, Prachi will be ousted in the morning.

Rhea tells that Ranbir was so happy with Prachi. She dislikes seeing them together. She feels so angered. Aaliya pacifies her. She asks who is going to hand over the papers to Prachi. Rhea tells that Prachi will accept that Ranbir and she had no relation, then Prachi will get ousted. Aaliya tells that there is nothing to worry, nobody will know the truth of their tricks. Rhea tells that she just wants Ranbir, she can’t see Ranbir with Prachi. She asks Aaliya to stay with them until Prachi gets ousted. Rhea recalls Dida’s planning. She wants to fail Dida’s plans. She tells that she had put Ranbir and Prachi in different rooms, she will make them separated forever. She tells that its time to give it back to Prachi.

Reviewed Rating for Kumkum Bhagya 4th January 2022 Written Update Prachi shoots back: 3/5 This rating is solely based on the opinion of the writer. You may post your own take on the show in the comment section below.