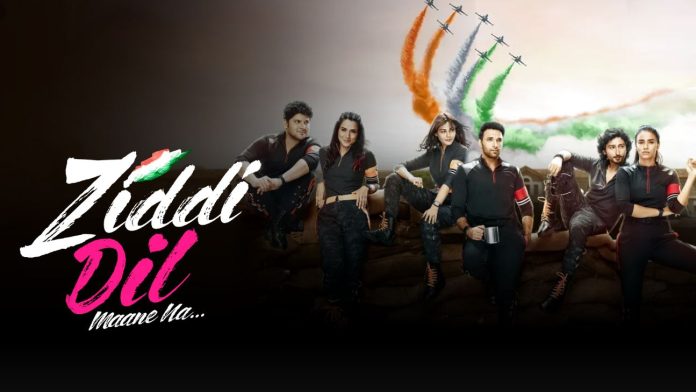 Ziddi Dil Maane Na 3rd January 2022 Written Update Sanju (Sanjana) gets shocked to see Kundan Ji outside SAF academy. She runs and hides behind a pillar. Kundan ji tries calling Sanju but she doesn’t pick up. Sid runs behind Sanju. Kundan ji thinks why Sanju is not picking up his call. Sanju thinks about how Kundan ji arrived at her academy. She feels scared thinking he doesn’t get to know the truth. She sees Kundan calling her and recalls herself lying to him. Sanju recalls lying to Kundan Ji about her not being able to attend Satsang held by his mother due to her illness. She picks up the call.

Kundan asks Sanju why she was not picking his call. Sanju lies that she was sleeping and her phone was on silent. Kundan tells Sanju that her academy guards are not allowing him to come inside. He asks her to tell them who he is. Sanju asks Kundan his reason for arriving so late at night. She tells no outsider allowed in the academy at this time. Kundan tells Sanju that Guards told him the same thing. He also tells Sanju that his mother is angry that she didn’t come to attend Satsang. Kundan Ji asks Sanju how she is working at such an inexplicable place.

Sanju feels bad with Kundan Ji’s words. Kundan tells Sanju that he will come to meet her tomorrow. Sanju tells Kundan that she will come to meet him instead. Kundan agrees. Both of them disconnect the call. While exercising, Karan recalls Monami and Aneesh hugging and dancing with each other at the new year party. Faizi comes and tells Karan that preparing will not work as he has prepared a lot now. He tells Karan that it’s time to do something. They see two staff helping Aneesh settle in the academy. Monami gets impressed seeing Aneesh cooking in the canteen.

She asks Aneesh if he is making a breakfast buffet for her? Aneesh says yes. Monami tells Aneesh that he hasn’t changed and does everything out of the way. Aneesh says “Happy New Year” to Monami. Monami wishes “Happy New Year” to Aneesh and hugs him. Karan and Faizi see them secretly. Karan feels Jealous. Aneesh makes Monami sit. Faizi tells Karan that Aneesh scored 1 and he is on zero. Aneesh makes Monami eat muffins. He tells Monami that he remembers that she likes Muffins a lot. Aneesh also tells Monami that he named her muffin in college. Monami laughs and Karan feels more jealous.

Aneesh says he misses their college days Monami tells Aneesh that she misses cutting tea at Kaka’s tea stall. Karan angrily says to Faizi that he will make Aneesh remember his college days. He drags Faizi in front of Aneesh and Monami. Faizi and Karan wish Aneesh and Monami “Good Morning”. By Aneesh’s permission they sit and eat muffins made by him. Karan asks Monami if she arranged all this. Monami says Aneesh arranged all this. Aneesh says he didn’t have any idea that they too wake up so early. Karan gives Aneesh an angry stare and says they are commandos. He further tells Aneesh that they have completed missions by being awake late at night.

Aneesh tells Karan that he and Monami too stayed awake late at night for studies and surgeries. Monami agrees. Karan feels more angry hearing all this. Monami makes Karan angrier by saying that Aneesh has been the most supportive senior she got. Aneesh gives victory glare to Karan. He tells Karan that he used to go to professors to ask Monami’s doubts as she used to be scared of professors. Karan tells Aneesh that Monami has changed. He says Monami has become more confident now, she supports the truth and doesn’t get scared of anyone. Monami feels happy hearing her praises from Karan. Karan says his Monami and stops.

Karan corrects and says Monami has changed a lot. Monami tells Aneesh that she learnt a lot from SAF Academy and now has become more confident. Aneesh says it’s good and says any academy can’t change a person so much. He tells Monami that she must have had potential already. Aneesh asks Monami to not take SAF Academy and its people so seriously. Karan tells Aneesh that SAF is their way of life. He says to Aneesh that civilians like him will never understand this thing. Karan and Faizi leave, thanking Aneesh for the muffins. Sid practices asking Sanju for a date with Bala. Bala rejects Sid’s ways of Sanju for a date.

Bala advises Sid to not ask Sanju for a date so early as he may get beaten up. Sid punches Bala and says that his gut feelings are telling him that Sanju will not reject his date invitation this time. Sanju’s mother scolds Sanju for not going to her mother-in -law’s held satsang. She asks Sanju to go and convince her angry mother in law. Sanju recalls Sid’s advice that a person doesn’t need another person for being happy. She recalls that Sid told her that a person shouldn’t depend on others for their happiness as its pets who depend on others. Her flashback ends when her mother asks her if she is listening. Sanju disconnects the call telling her mother that she is going to convince Kundan’s mother.

Sanju thinks she can’t make any excuse today and she will have to meet Kundan’s mother. Sanju leaves before Sid could ask her for a date. Aneesh and Monami are seen having kulfi together. Aneesh asks Monami to gift a monster mask to Karan as it suits him. Monami asks Aneesh to not talk bad about Karan. On Aneesh’s questioning, Monami tells that Karan is best and he can give his life for his cadets and team. She says everyone respects Karan as he is passionate towards his work, country and duty. Aneesh says he understood that she and Karan like each other. Aneesh reminds Monami that he used to convince her by giving her treats.

Kundan sees Sanju’s picture of the new year party and gets shocked on realizing that Sanju lied to him. Sid’s message keeps popping up in the notifications on Sanju’s phone. Kundan asks Sanju how dare she lie to him. Sanju asks when she lied to him? Kundan shows Sanju her new year party picture. He scolds Sanju for lying to him, enjoying the new year party and disrespecting his mother. Kundan questions Sanju’s upbringing. He asks Sanju why she lied to him just for a party. Kundan warns Sanju of repeating her mistake. He asks her to be in limits.

Kundan tells that only he, his mother and home will be her priority. Sanju tells Kundan she heard his opinions a lot. She further tells Kundan that she will herself decide her priorities. In the next episode, Karan will feel angry for not being able to talk to Monami due to Aneesh’s entry in their academy. Faizi will advise Karan to not be angry and silently attack and destroy the enemy. On the other side, Sanju will tell Kundan that she agreed for marriage not slavery. Kundan will ask Sanju’s mother to get Sanju married to him as soon as possible.

Reviewed Rating for Ziddi Dil Maane Na 3rd January 2022 Full Written Update: 3/5 This rating is solely based on the opinion of the writer. You may post your own take on the show in the comment section below.