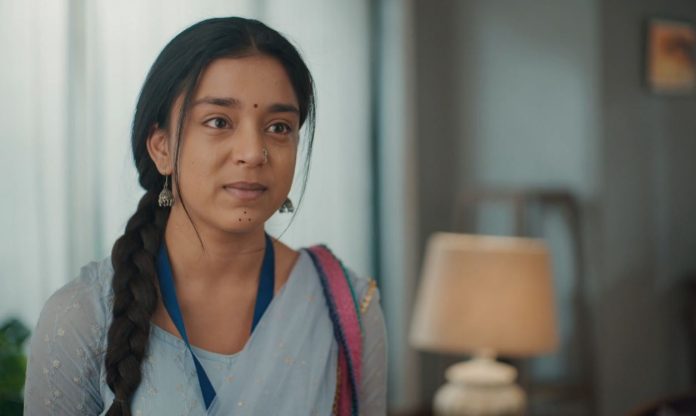 Imlie 4th January 2022 Written Update Divorce revelation Malini is seen organizing Tripathi house’s furniture according to her. Tripathis get shocked on seeing this. Rupi says to Malini that by changing the house’s settings, the house’s situation doesn’t change. She tells Malini that she can make Tripathi house appear like her mother’s house but it will never become her house. Radha asks Rupi what she is saying? She says it’s Malini’s house too. Malini says she was changing furniture settings. She asks Aparna if she has any objection? Aparna replies no. Rupi says to Malini that she wouldn’t have brought changes in the house, if she would have thought about Aparan’s opinions.

Malini tells Rupi that she thinks about everyone. She asks Rupi to see that New year is arriving and everyone is still holding past things and old memories. Malini says there should be a change. Aditya comes and Malini asks him how he found the changes. Aditya says it looks good. Malini explains to him the changes she made. Rupi asks everyone to see that Malini is worried about the house, not Aditya. She says Aditya is upset and it doesn’t matter to Malini. Radha asks Rupi to be quiet. Malini tells Aditya that she tried to make an environment for their post marriage rituals.

She tells Aditya that she prepared for the “Chula Chadai” ritual as well. Aditya is seen uninterested in Malini’s talks. Malini asks Aditya to pay attention to her as otherwise no one at home will take her seriously. She tells Aditya that there are many people at home who are unhappy with their marriage. Aditya asks Malini how anyone’s opinion matters as they are married now. He asks Malini to do as she wishes and leaves. Malini thinks Aditya can’t distance himself from her. She thinks now Aditya is going to get a big shock which will force him to come back to her.

Tripathi’s house’s bell rings and Aditya opens the door. Aditya sees Imlie with Rathores at his door. He asks Imlie how many times he needs to tell her to not return. Aditya tells Imlie that it is not her house anymore that she will come here as per her wish. Aparna asks Aditya to talk with respect. She asks Imlie and Rathore to come inside. Aditya says to Aparna that time has changed and nobody comes to anyone’s home without invitation. Imlie tells Aditya that she would have never returned had it not been related to her work. She says she hasn’t come without invitation. Aditya asks Imlie who invited her?

Malini says she invited Imlie on lunch to thank her for helping them in their marriage. She further tells Aditya that Imlie and Aryan will finalize coverage pictures with them. Aditya tells Malini that she did the right thing. He says to Malini that Imlie and Aryan came at the right time as its their ring finding ritual too. Malini feels Anu’s trick is working as anyhow Aditya supported her after a long time. Malini asks Imlie if drastic changes are looking so good? They give each other an angry look. Ring finding ritual of Aditya and Malini starts. Imlie recalls her and Aditya’s ring finding ritual. Narmada and Arpita notice that no one except Malini and Aditya looks interested in the ritual. Malini sees Imlie and thinks that the latter would be considering Aditya’s love towards her true.

Malini thinks that nobody realizes that they fell in love while pretending it. She thinks Aditya will fall for her one day. Aditya wins the first round of the ritual. Malini congratulates him. Aditya says to Malini that he will never let her loose in any way. He further says to Malini that only she has the right on his every victory, every breath and every moment of his life. Aditya’s words shocks Imlie and everyone present. Malini looks at Imlie and says that she hopes that her and Aditya’s happily married life doesn’t attract anyone’s evil eyes. Imlie tells Malini that no one is interested in her and Aditya’s married life, be it good or bad.

Imlie tells Malini that she is intentionally doing everything in front of her. Aryan stops Imlie and Malini from arguing further. Aryan tells Aditya that his workload in the obituary department may be less but he and Imlie are busy. Aditya tells Aryan that he has much time to spoil others’ relationships. Aryan advises Aditya not to blame others for his mistakes. He tells Aditya that people who fear to face their mistakes do so. Aryan tells Aditya that he isn’t afraid of anyone. Aditya says to Aryan that people whom’s everything got snatched doesn’t fear anyone. Aparna asks Aditya to behave. Pankaj apologizes to Narmada for Aditya’s rude behavior.

Aryan asks Pankaj to not do so as it doesn’t affect him. He says he came on his client’s request, who is Aditya’s newly wedded ex-wife. He indirectly insults Malini. Narmada says that she and Arpita wish to leave for home. Malini requests them to stay for her chula chadai ritual. She says she prepared the meal for everyone working hard. Imlie and Aryan ask Malini to call them back when her Chula Chadai ritual ends as they have no time for it. Malini forwards the check towards Aryan and asks him to complete his work. Aparna and Pankaj feel embarrassed. Malini explains her and Aditya’s love story moments one by one with different dishes and cuisines.

Imlie feels angry hearing love and proposal moments of Aditya and Malini. Aditya says to Malini that he remembers each and every thing. This angers Imlie more. Aditya asks Malini to make him eat with her hands. Malini does as Aditya says. Aditya praises Malini’s cooking skills and experience. He also says that no one prepared food for him with so much love. Aditya asks Imlie to eat something as this food consists of his and Malini’s love. He asks Imlie to not insult his and Malini’s love by not eating the food. Imlie says there is no harmony here. She further says it’s a box of rocks not a meal table. Malini asks what did she say?

Imlie asks Malini didn’t her mother teach her Hindi idioms? Malini feels irritated. Imlie explains that she meant, silly stupid things kept together doesn’t suit dining table nor a family. Aditya asks Malini to let it be as all this food will be spicy for Imlie. Imlie replies that her tolerance is not weak as she can fill her stomach with just chillies. She takes a bowl of chillies and starts eating it all one by one. Harish scold Imlie and asks her what is she doing. Imlie’s act hurts everyone except Malini. Malini asks Imlie why she stopped. She gives a lot of chillies to Imlie and asks her to eat them to fill her stomach as this way she will not return hungry from her elder sister’s in-laws house. She throws the plate full of chillies in front of Imlie.

Imlie picks up the chili but Aryan stops her. He tells Malini to not dare waste his time otherwise he will charge her the amount that she never saw. Aryan takes the chili away and serves water to Imlie. Imlie drinks it. Aditya forces food in his mouth. Aryan tells Imlie that he doesn’t like this place as it has a lot of negative vibes and asks her to complete her work fast. Arpita feels a burning sensation in her eye. Malini asks Sundar to show the washroom to Arpita. Sundar gets lost in Arpita’s beauty. He takes her to the washroom. On the way to the washroom, he successfully helps Arpita. Arpita forgives Sundar for his past mistakes.

Aditya finds Imlie alone and asks her if she loves Aryan a lot. Imlie tells Aditya that she could neither learn to love Aryan nor hate him (Aditya). She tells Asutya that she learnt to respect herself. Imlie tells Aditya if he wants to accuse her for the same thing, then she can’t stay alone with him for even a second. In the next episode, Imlie will tell Aditya that she got everything on her merit not by spending the night with anyone. She will further tell Aditya that his mind has gone filthy as he is still hurling accusations on her. Aditya will ask Imlie why she sent him divorce papers if there is nothing between her and Aryan. Malini will reveal to Imlie and Aditya that not Imlie but she sent divorce papers to Aditya. Aditya will look at Malini shell shocked, while Imlie will stare her angrily.

Reviewed Rating for Imlie 4th January 2022 Written Update Divorce revelation: 3/5 This rating is solely based on the opinion of the writer. You may post your own take on the show in the comment section below.