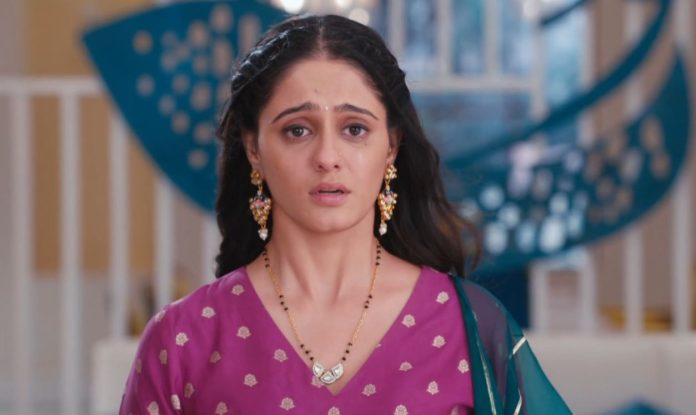 Ghum Hai Kisikey 11th January 2022 Full Written Update Sai asks Samrat to understand her perspective too. She says she can’t live in Chavan house after whatever happened to her here. Sai says many people of Chavan house don’t respect her but she needs to respect herself. She says she can’t see her self respect getting hurt. Bhavani asks Sai what about the Chavan family’s reputation? She says to Sai that she will reveal her family problems to everyone in the hostel. Bhavani asks Sai if she wants to ruin their reputation. Angry Sai asks Bhavani that she is tensed about Chavan family’s reputation instead of Shruti and Virat’s affair?

Bhavani tells Sai that she is wrong here as she will surely ask Virat about Shruti. Ninad tells Sai that he and Ashwini will never let her self respect get hurt and for that they can ask Virat to leave the house too. Ninad’s word shock many family members. Ninad tells Sai that she won’t leave the house. Sonali asks Omkar to see that their house has become a tv serial drama. She also asks him to see Bhavani’s face. Omkar tells Sonali that he can envision this house as a circus. They laugh in a low voice. Sai tells Ninad that she is happy to know what place she holds in his heart. She tells Ninad that she won’t wish the son of this house to leave the house.

Sai further tells Ninad that they can’t live in a hoax that her and Virat’s marriage is real. She reminds that her and Virat’s marriage is just a deal. Sai says Virat has full right to take his personal life decisions and is not at fault. She asks the Chavan family to welcome Shruti happily in Chavan Niwas. Sai says Shruti should get her place in Chavan Niwas. Her words shocked the whole family. Bhavani asks Sai if she has gone mad and thus talking nonsense. Ashwini and Ninad ask Sai how they can welcome the woman who ruined their happiness. Sai says she is saying what is actually happening. She asks Ninad won’t the family have searched for a good girl for Virat’s marriage, if she wouldn’t have entered Virat’s life.

Sai requests everyone to accept Shruti as their daughter in law and forget her as a mishap. Pakhi feels happy hearing all this. Sai asks everyone won’t they be happy after welcoming their real daughter in law. Bhavani asks Sai to stop and not tell them who they should accept as their daughter in law. Pakhi feels angry hearing Bhavani’s words. Sonali says greatness also has limits. She says she hasn’t seen a woman who is ready to name her husband to anyone. Sai tells Sonali that she isn’t trying to be great. She asks Sonali can’t she see that she is also in pain. Sai says that truth can’t be ignored. Bhavani asks God to give some wisdom to Sai.

She says Sai doesn’t have the knowledge of living in a society. Samrat asks Sai how she can ask them to accept the woman who ruined her life. He says no one can do such wrong with anyone that Shruti did to her. Sai asks Virat what bad Shruti did to her? She says Virat gave her place to Shruti and chose her instead of her. Sai says Virat made a decision of his life and now she has to make a decision for her life. Ashwini requests Sai to see love and importance for her in Virat’s heart. Sai tells Ashwini that now someone else has become important for Virat. She asks everyone to accept the truth as she understands and respects their feelings.

Sais says she can’t beg for anyone’s support in her life. She says she doesn’t want to force herself in anyone’s life. Ashwini asks Sai how will she and family live without her. She reminds Sai that she helped improve her married life. Pakhi feels irritated. Ashwini folds her hands and requests Sai to not leave. Sai requests to not cry and make her weak. Mansi asks Sai to once again think about her decision. Mohit blames himself for everything as he revealed Virat’s lies to family. He apologizes to Sai. Sai tells Mohit that he is not at fault. She says everyone knows that she can’t tolerate lies and Virat lied to her a lot. Mohit says to Sai that she will have to cross his dead body to leave the house. Mohit’s words shocked everyone. Pakhi feels more frustrated. Sonali and Karishma scolds Mohit for his words.

Sai asks Mohit to not say such things. Omkaar too scolds Mohit and insults Sai for not knowing how to respect elders. Pakhi feels very happy hearing Sai’s insult. Virat comes downstairs and Pakhi alerts everyone about it. Pakhi taunts Sai for gaining everyone’s sympathy by hiding that Virat is at home only. Samrat asks Virat when did he come? Virat says he returned a little ago. Ninad angrily asks Virat if he was with Shruti last night. He scolds Virat for embarrassing him and making Sai leave the house. Ninad indirectly calls Virat shameless. He cries and says to Virat that he can’t ask Sai to stay back because of his mistakes.

Virat says to Ninad that he can’t stop anyone from living his/her life in their own way. Virat’s words shocks everyone except Pakhi. Pakhi asks Virat if Sai packed her stuff in front of him. She further asks Virat he even didn’t try to stop Sai from leaving? Samrat also scolds Virat for not trying to stop Sai. Sai tells Samrat that Virat tried to stop her using sugar coated words but did not answer any of her questions. She says Virat failed to stop her. Ashwini tells Virat that he can’t bring Shruti to Chavan Niwas ever as the family won’t allow it. Virat asks Ashwini when he said that he will bring Shruti to Chavan Niwas. Bhavani too scolds Virat for getting involved with another woman.

Sonali says their family’s reputation will ruin once Virat’s affair gets exposed in society. Virat says he doesn’t care about society but about his family’s opinions. Pakhi asks Virat to give reason for choosing Shruti over Sai. She humiliates Shruti, Sai and Virat at once indirectly. Virat asks Pakhi to stop her nonsense and not compare Sai and Shruti. He says Sai and Shruti have different places in his life. Virat asks his family not to involve Shruti in their cheap conversations and not humiliate her. Ninad and Ashwini scolds Virat for praising another woman in front of his family. Ashwini asks how can he stand against his family for an outsider. She asks Virat to leave the house so Sai can stay in Chavan Niwas. This shocks the whole Chavan family.

Main door of Chavan Niwas opens and all diyas blow off. In the next episode, Sai will return Virat a ring and leave Chavan house. Virat will think that he has no more energy left to repeat his words or can prove his innocence. He will continue looking at leaving Sai.

Reviewed Rating for Ghum Hai Kisikey 11th January 2022 Full Written Update: 3/5 This rating is solely based on the opinion of the writer. You may post your own take on the show in the comment section below.