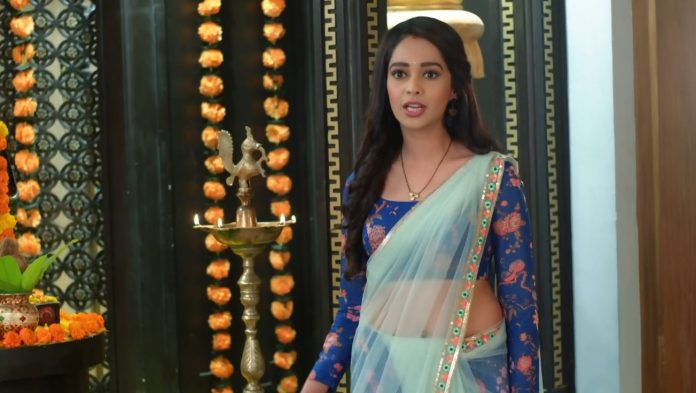 Prachi asks Rhea to learn and get habitual to defeat, because now the unimaginable will happen. She threatens Rhea that she will make Rhea face the dire consequences. She stays undeterred in front of Rhea’s evil plotting and gives a befitting reply. What will Prachi do to cut off Rhea’s new trap? Keep reading.

Earlier in the show, Rhea tells that Ranbir was so happy with Prachi. She dislikes seeing them together. She feels so angered. Aaliya pacifies her. She asks who is going to hand over the papers to Prachi. Rhea tells that Prachi will accept that Ranbir and she had no relation, then Prachi will get ousted. Aaliya tells that there is nothing to worry, nobody will know the truth of their tricks. Rhea tells that she just wants Ranbir, she can’t see Ranbir with Prachi. She asks Aaliya to stay with them until Prachi gets ousted. Rhea recalls Dida’s planning. She wants to fail Dida’s plans. She tells that she had put Ranbir and Prachi in different rooms, she will make them separated forever. She tells that its time to give it back to Prachi.

He asks her what did he do that she is hugging him. He asks Dida who has burnt his important files. He thinks Prachi has burnt it. Dida tells that Prachi didn’t fight him, it was their judgement night, Prachi united with him, they have accepted the decision of fate. He asks her what happened between Prachi and him. She tells that the entire family has witnessed this, Rhea and Pallavi were too angry. He asks her what happened. He thinks she is fooling him. She tells that she never jokes when its about Prachi and him. She reveals that Ranbir and Prachi got married in the bedroom, the family is the witness.

Ranbir asks her what is she saying. She tells that everyone has seen it. Ranbir doesn’t believe it. He tells that he doesn’t remember anything. She tells that Prachi and he were drunk, they just followed their hearts and ended their annoyances, they love each other and proved it this time. He tries to call Prachi’s words. He loses Prachi’s important letter. He tells Dida that he got really late, he has to get ready and rush to office. He goes to change. Dida hopes that Prachi also remembers the night incident. Aaliya and Pallavi ask Rhea where was she till now. Dida makes fun of Rhea.

Rhea tells Dida that she had gone to the temple to pray for Prachi’s sin clearance. She tells that Prachi has committed many sins, she will be punished for it. Prachi comes out of her room. Dida asks Prachi is she okay. Pallavi asks Rhea to make Prachi out of the house soon. She doesn’t want to tolerate Prachi. Rhea tells that its Prachi’s turn to leave the house. She wants to tell Prachi about the papers. Ranbir thinks Prachi and he got married, they ended their differences, maybe they will live together like a happy family. Vikram tells Pallavi that he is going to office.

Rhea asks him to go a bit late. He asks is it important to do this drama in his presence. Aaliya wants everyone to witness the drama. He asks them to rush it and end the matter. Rhea tells that they have to settle the scores. Ranbir thinks what is happening, maybe Rhea is going to fight Prachi about the marriage. Rhea asks Prachi did she get a good sleep at night. Ranbir asks Rhea to stop the drama in the morning. Rhea tells that the matter is just between Prachi and her. He asks about the matter. She tells that he is the common person in their lives, he is Prachi’s husband and also her husband. She reminds him that they are also married. Prachi asks Rhea to just end the matter.

Ranbir also wants Rhea to spare Prachi. Vikram asks Ranbir to let Rhea complete her talks. Rhea thanks him. She asks Prachi about the night incident. Prachi tells that she doesn’t remember anything. Ranbir thinks if Prachi doesn’t know about their marriage. Prachi tells the family about Rhea, who has crossed limits once again. She tells that Rhea doesn’t know the limits, she always stoops low, she has ashamed the word Sautan also. She tells that Rhea took her signatures on the guilt admittance papers, which stated that Ranbir never married her/Prachi, the pandit was fake, he was a paid actor.

She exposes Rhea’s plans. She asks Rhea why is she choosing the illegal way to prove her legal marriage. She wishes Rhea tells the truth for once. She adds that Ranbir and she got married when Ranbir was going to marry Rhea. She feels their marriage has become a curse, they were ousted from the Kohli house, he had to lose his family because of the marriage. She questions them back. She asks Rhea is the denying the marriage and calling the Kohlis a liar too. She tells that Ranbir and she had to leave the house and stay away in a rented house. She adds that Rhea is trying to end the history.

She questions Prachi how she doesn’t remember the marriage drama. Prachi recalls that Shahana told her the entire truth and warned her. Prachi was too angry on Rhea, but controlled her feelings, when she thought about her baby. Aaliya also questions the same. Dida tells that they will remind Prachi about the marriage. Aaliya tells that Prachi is lying. She accuses Prachi to angrily get the truth out of her. Pallavi lies to support Rhea. Prachi confronts Pallavi for her support to the evil duo.

Reviewed Rating for Kumkum Bhagya 5th January 2022 Written Update Unimaginable: 3/5 This rating is solely based on the opinion of the writer. You may post your own take on the show in the comment section below.