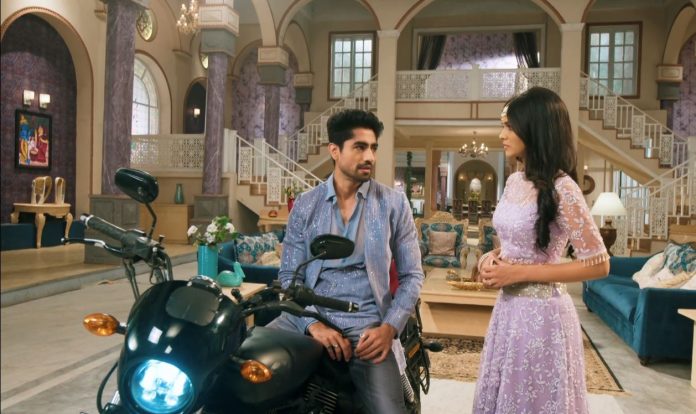 Yeh Rishta 5th January 2022 Written Update Abhi stuns Akshu Abhimanyu comes downstairs. Manjiri alerts everyone that Abhimanyu has come. Abhimanyu and Aarohi say “hi, hello” to each other. Suhasini wards off the evil eye from Abhimanyu. At Goenka Mansion, Akshara is seen getting ready for the engagement. Nishtha takes a selfie with Abhimanyu. Akshara receives a message from Kairav asking her to arrive soon. Akshara replies to him. She is about to fall and on the other side Abhimanyu says “be careful”. Guests and Family look at Abhimanyu with questioning eyes. Neil understands Abhimanyu’s situation and tells everyone that Abhimanyu was asking Manjiri to be careful of floating candles as they can burn her saree.

On the other side, Akshara saves herself from falling off the stairs. She thinks thank god she got saved. Abhimanyu thinks about what happened to him suddenly. Akshara thinks the family took her car for shagun things. She further thinks to book a cab as she will look funny riding in an auto dressed up like this. Akshara and Abhimanyu look at the time at the same time. Shefali helps Manjiri. Manjiri goes to Swarna and Suhasini. She asks them if the preparations made by her look fine to them. Swarna and Suhasini praise Manjiri’s arrangements. They tell Manjiri that Akshara will arrive soon on the former’s questioning about Akshara. Neil asks Abhimanyu what is he so worried about?

Parth praises Shefali’s look. He asks her for a selfie. Shefali gets a call and leaves to take it. Parth feels bad. Mahima and Anand come to him. Anand tells Parth that he asks him to work so he doesn’t need to stand alone. Parth tells Anand that he has no problem standing alone. He further tells Anand that he will work on what he likes. Anand asks Parth to think how will people question him about his work once Abhimanyu gets married. Mahima makes fun of Parth’s help towards Manijri in the kitchen and household works. Parth requests Mahima to spare him. Anand leves telling Mahima that Parth will ruin their reputation.

Mahima thinks she wants Akshara to become Abhimanyu’s wife so that their place remains the same as usual in the Birla family. She feels irritated thinking that Aarohi is desperate to become Abhimanyu’s wife and to take her place in Birla house. Akshara asks Can driver to arrive soon. Aarohi thinks she has to do it. Harshvardhan notices Aarohi tensed and asks her the reason. He tells Aarohi that day before he called her and told that he didn’t find the secret photograph but there is nothing to worry about. They wonder what happened? Aarohi tells Harshavardhan that maybe she tapped the receive button and forgot about it.

Harshvardhan asks Aarohi to be careful and not talk much about it. He tells Aarohi that he doesn’t want any more drama. Harshvardhan explains to Aarohi that her image is very important as she is going to become Birla family’s daughter in law. Aarohi thinks she will tell Harshvardhan about her exam once some information about it arrives. Neil sees Harshvardhan and Aarohi talking secretly and recalls Aarohi’s lie. He thinks he won’t leave Aarohi if she hurts Abhimanyu. Manish pulls Harshvardhan’s leg. Anand enjoys the scenario as Manish and Akhilesh take Harshvardhan to dance with them. On announcement of it, everyone feels surprised and laughs.

Manish and Akhilesh don’t let Harshvardhan escape. Anand asks Harshvardhan to dance for Birlas reputation. Manish and Akhilesh dance on Harshvardhan’s sides. They make him dance on “UP Wala Thumka”. Abhimanyu feels frustrated waiting for Akshara. Men of Birla and Goenka families dance to the same song. Abhimanyu keeps staring at the entrance and his watch. Dance and song ends and everyone claps. Manjiri praises Harshvardhan’s dance and asks him to dance at other functions too. Harshvardhan refuses saying he danced today because he insulted Goenkas by calling them “Nachaniya Khandaan” and wanted no issue. He leaves asking Manjiri to not sing again. Manjiri feels bad.

At Goenka Mansion, Akshara scolds the Cab driver on the phone for not being able to come to receive her. She disconnects the call and thinks to take an auto. Akshara thinks that she already planned to video call her family with a traffic jam background so that she can make an excuse of getting late. She further feels happy thinking she won’t reach the engagement function on time as muhurat is at 12 pm. She gets shocked and confused on hearing “Bole Chudiyan”. A Bluetooth speaker comes rolling near her. She gets emotional and shocked seeing Abhimanyu on bike in front of her. Abhimanyu rides his bike in a circle around Akshara. He stares at her angrily. He stops and asks Akshara to come with him to his engagement function.

Akshara refuses to go to engagement. Abhimanyu asks Akshara if she can come in his heart, house and room then why can’t she come to his engagement. He further asks Akshara what is she doing in his heart and what was her accessory doing in his room. Abhimanyu shows Akshara her accessory. He tells her that he got it from his room. Akshara tells Abhimanyu that she just went to his room to save it from getting burnt from a short circuit and her bracelet fell there. She asks Abhimanyu to not think much. Abhimanyu tells Akshara that he doesn’t believe that her bracelet fell in his room by mistake. Akshara asks Abhimanyu why she will intentionally leave her bracelet in the room which is going to be her sister’s room too.

Abhimanyu angrily returns Akshara her bracelet and asks her to not come near him. Akshara tells Abhimanyu she will never come near him. Abhimanyu tells Akshara that he was coming on horse to pick her up but now came on bike as she is going to be his sister in law. Akshara refuses to go with Abhimanyu. Abhimanyu forcefully makes Akshara sit behind him on his bike and takes her with him. Nishtha announces Abhimanyu and Aarohi’s dance. Aarohi asks where Abhimanyu is? Nishtha goes to search Abhimanyu. Abhimanyu and Akshara leave from Goenka Mansion. Everyone gets worried about Abhimanyu’s whereabouts, especially Aarohi. Aarohi thinks about how many dramas will happen before her marriage.

Reviewed Rating for Yeh Rishta 5th January 2022 Written Update Abhi stuns Akshu: 4/5 This rating is solely based on the opinion of the writer. You may post your own take on the show in the comment section below.