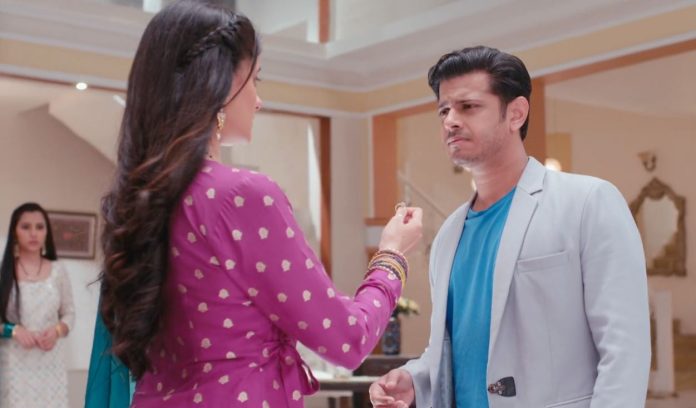 Ghum Hai Kisikey 12th January 2022 Full Written Update Ashwini asks Virat to leave the house. Her words shocks the whole Chavan family. Bhavani asks Ashwini to use her brain and not talk nonsense. Virat tells Ashwini that she didn’t need to talk to him so bitterly. He tells Ashwini that he would have left the house without any questions, if she would have simply asked him to. Virat says he has become a liar and deceiving person in everyone’s eyes. He says if everyone thinks the same, then there is no point in him staying in Chavan Niwas. Pakhi feels scared hearing Virat’s words.

Ninad asks Sai to leave this matter to them as she doesn’t understand right or wrong being young. He says he doesn’t feel good saying this, but he also feels it will be good if Virat leaves the house. Ninad’s words shock family members to the core. He says one dirty fish makes the whole pond dirty. Ninad further says that he doesn’t want other sons of the house to follow in Virat’s footsteps. Ninad’s words again shocks everyone. Virat thinks he can’t believe that his parents don’t trust him and made him feel like a stranger. Virat says he has hurt his family a lot and will not hurt them more and will leave. Pakhi feels scared thinking that Virat will go away.

Mohit tells Virat if he has decided to leave the house and go to Shruti, then do one thing. He asks Virat to give divorce to Sai. Virat shouts angrily at Mohit. Whole family looks shocked. Ninad says Mohit is not wrong. He tells Virat that he will have to give divorce to Sai, so that she can live in Chavan Niwas as their daughter. Ninad says he wants to get Sai married to some good person one day. Virat clenches his fist in anger and looks shocked. Pakhi feels relaxed hearing Ninad’s words and Samrat notices it. Sonali asks Virat why is he shouting at Mohit? She asks Virat how he could shout after making a big mistake.

Mohit asks Sonali to leave the old matter as some different conversation is going on. Ninad interrupts and says, whatever step he will take further, will take for Sai’s well being. He says he will get Sai and Virat divorced if it is good for Sai. Sai asks Ninad what is he saying? Bhavani asks Ninad if he has lost his mind living with wild Sai. She says she will not let this divorce happen. Bhavani says no divorce happened in their family till now. Pakhi feels worried. Bhavani asks Ninad how dare he think of getting his own daughter in law remarried. She tells Ninad that he has gone mad like an old man.

Ninad says he doesn’t want Sai to stop living her life due to Virat’s deception. He says he just wants to get Sai free of this unreasonable marriage. Pakhi feels hopeful. Samrat gets confused seeing Pakhi’s idiomatic expressions. Virat says he isn’t thinking of divorcing Sai and can’t ever think of it. Pakhi feels worried. Pulkit asks Virat if he wants to live with both Sai and Shruti? Virat and Bhavani feel disgusted with Pulkit’s question. Virat says he can neither repeat his words nor has the energy to prove his innocence. He says he doesn’t want to give divorce to Sai. Virat says he will do whatever Sai decides as he has got tired.

Everyone feels angry and shocked but Pakhi feels happy. Sai says to Virat that she will soon come to get divorce papers signed by him. Pakhi feels much happier, while others feel shocked hearing this. Bhavani tells Sai that she is committing a mistake. Sai says she understood that there is no place left for her in Virat’s life after whatever said. Pakhi feels relieved. Devi scolds and beats Virat for hurting Sai. Sai stops Devi from doing so and asks her to say Goodbye to her. She asks everyone to let her leave with happiness. Sai further says to everyone that she needs their blessings to face all her problems alone. Pakhi feels frustrated.

Sai requests everyone to give her strength instead of stopping her. Pakhi feels more irritated when Ninad requests Sai to stop. Omkaar asks Ninad to not beg in front of stone hearted Sai. Sonali asks Sai if she doesn’t feel ashamed of making her father in law beg in front of her. Sai tells Sonali that she ignores her words as she always needs some excuse to taunt her. Pakhi taunts Sai for always returning after leaving the house. She asks Sai to tell them in advance if she will return this time too. Sai asks Pakhi to enjoy as she knows she is happy seeing her leaving. Pakhi makes an irritated face.

Bhavani refuses to bless Sai and calls Sai selfish for not thinking about the family’s reputation. Pakhi feels proud of herself. Sai accepts that she is selfish for standing for her own rights. She says she will remain selfish whole life. Ashwini requests Sai to not leave the house and says that she will support her to get a divorce from Virat. She says she doesn’t want people to know what happened between her and Virat. Sai tells Ashwini she is not the person who hides things from people. She asks everyone to not be disappointed. Sai further seeks promise from everyone to take care of themselves, forgetting her.

Samrat tells Sai that they can’t imagine their life without her as they have got habitual of her presence. Sai tells Samrat that with time they will get accustomed to her absence too. She tells everyone that one day they will realize that her decision was right. Sai says she will lose her self respect if she stays in Chavan Niwas anymore. Devi and Pulkit request Sai to live with them. Sai says one day everyone will get to know the truth and she wants to fight her battle on her own. She tells everyone that their moral support is enough for her. Sai says she wants to become financially, socially and emotionally independent.

Mansi asks Sai if she will forget them after leaving. Sai replies no. Mansi seeks a promise from Sai to call her brother Samrat for any help. Sai promises Mansi. Next Sai takes Omkaar and Sonali’s blessings. Sonali emotionally asks Sai to always stay happy wherever she lives. Sai asks Mohit and Karishma to never leave each other’s support. She says she will pray for their happy life. Mohit asks Sai why she is leaving as she didn’t commit any mistake. Sai asks Mohit to promise her that he will remind her of his new tv show’s premiere. Mohit promises Sai. Sai says she will make everyone see his TV show and tell everyone that it’s her brother’s TV show.

Sai asks Mohit to never leave his passion and take care of Karishma. Karishma gives a smile to Sai. Sai takes Ninad and Ashwini’s blessings. Ninad scolds Sai for not accepting him as her father and for not agreeing to his decision. Sai hugs Ninad and tells him that she will always remain his daughter. She tells Ashwini and Ninad that they are everything for her. Sai goes to Virat and tells him to always be happy. Virat looks at her teary eyed. Sai doesn’t allow Virat to help her take her luggage. Including Virat, everyone feels shocked. Sai recalls the past and returns the ring Virat made her wear. Except Pakhi and Omkar, everyone feels bad for Sai and Virat’s ruined relationship.

Virat recalls the moment he gifted the ring to Sai. His hands shiver while taking the ring back from Sai. Pakhi feels very happy. In the next episode, Sai will leave the house telling Virat that his betrayal broke her badly. She will further tell Virat that she lost all her pride upon their friendship because of him.

Reviewed Rating for Ghum Hai Kisikey 12th January 2022 Written Update Broken: 4/5 This rating is solely based on the opinion of the writer. You may post your own take on the show in the comment section below.