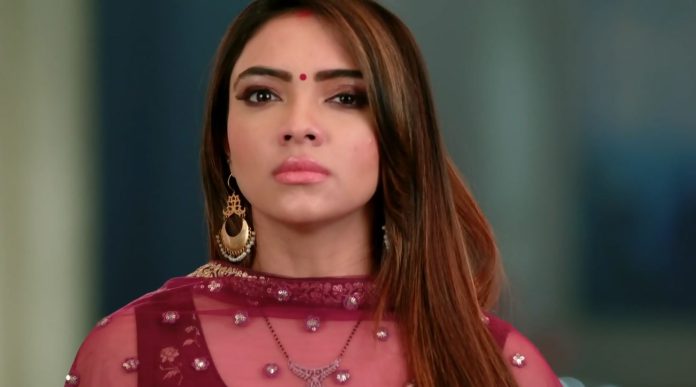 Kumkum Bhagya 6th January 2022 Written Update Defeat drag Prachi eradicates Rhea’s planning and its consequences, stating that she remembers everything how Rhea tricked her to get her signatures on the papers. Prachi has no idea about it, because she was already high. She got to know Rhea’s planning from Shahana. She opposes Rhea sternly. But Aaliya and Rhea are really rigid. Rhea tells Prachi that she had already warned her at night that she will be ousting Prachi of the house. She produces the same papers in front of Prachi and shows the signatures. She tells that Prachi knows its her signatures.

She asks Prachi to check if the signatures are real or forged this time. She tells that she has prepared the guilt admittance papers that calls Ranbir and Prachi’s legal marriage void. She expects that Prachi doesn’t deny that she had signed the papers herself. Ranbir is shocked to know everything. He didn’t expect Rhea to take this step. He is more disheartened to see his parents supporting Rhea in the wrong thing. Rhea tells that the papers testify that Prachi never married Ranbir, she isn’t Ranbir’s wife. She declares herself as Ranbir’s legal wife. She tells that she has proved her word true by making Prachi last night really the last one in the house.

Prachi asks Rhea to learn and get habitual to defeat. She threatens Rhea that she will make Rhea face the dire consequences. She stays undeterred in front of Rhea’s evil plotting and gives a befitting reply. Rhea and Prachi expect to get Ranbir’s support. Whom will Ranbir support? Will he gets under the emotional blackmailing again? Keep reading.

Prachi rebukes Rhea and Pallavi. Rhea asks Prachi to mind her manners. Prachi tells that they know about the plotting. She wants to blame Pallavi on her face. She asks Pallavi to support Rhea but not stoop to her level. She asks Aaliya to have some shame. Aaliya tells that she is ashamed to call Prachi her niece. Prachi tells that Aaliya will be ashamed all life, because their relation won’t change. She tells Pallavi that she didn’t feel bad before, knowing Pallavi loves her son a lot, but now she realized that Pallavi doesn’t love her son, but just cares for Rhea. She asks Pallavi to not forget the difference between right and wrong. She asks Pallavi not to trust Rhea, who can spike the drink of her own sister. Rhea tells that Prachi is lying to just prove her wrong.

Prachi blames Rhea for trying to kill her. Rhea asks her to stop the drama. She shows the papers signed by Prachi. She reads out the legal documents. She tells that Prachi has stated to end her fake marriage with Ranbir, so that Ranbir can keep his real marriage with his wife Rhea. She mentions that Prachi has written that she is also signing the divorce papers. Prachi tells that Rhea had made these papers and got her signs by trick. Ranbir asks Rhea is this really true, did she spike Prachi’s drink. Pallavi tells Ranbir that he was silently watching when Prachi was insulting his mum.

She asks Ranbir not to question Rhea, else it would mean that he doubts his mum. Prachi tells that Ranbir is questioning Rhea to be sure that his mum isn’t doing wrong. Pallavi tells that Rhea didn’t do anything wrong. Prachi asks Pallavi to answer her and support the truth. Pallavi confesses Rhea’s crime. She tells that Rhea had spiked the drink to get Prachi’s signatures, they all are involved in this plan, but Prachi shouldn’t be shocked, because she is the one who started it. She blames Prachi for snatching Ranbir from Rhea. She tells that whatever Rhea did isn’t wrong, Rhea did right with a wrong doer like Prachi. Prachi tells that she is right, she never snatched Ranbir from Rhea.

Ranbir asks Rhea to stop it. Prachi asks him not to fake goodness, because he is the reason she is seeing this day. Pallavi tells that Ranbir isn’t good, if she has a problem, then she should leave, she isn’t a Bahu for them. Prachi tells that she is Pallavi’s Bahu. She warns Pallavi to not provoke her more. Ranbir asks Prachi to come with him and talk. Rhea asks him to talk in front of everyone. Prachi makes Rhea jealous by holding Ranbir’s hand. She agrees for a private talk with him. They go aside. He asks her to tell once that she needs him, then he will declare their togetherness.

He asks her to keep her anger aside. He adds that he told him the entire truth. She is surprised. He tells that he remembers what she told him. He adds that they got married last night. She worries if he remembers the pregnancy truth. He asks her to take care of herself, else she will be in problem. He asks her if she is pregnant. She is shocked by his question. Aaliya tells that Ranbir doesn’t respect his parents, he took away Prachi. Dida tells that they are hurt that Ranbir gives much importance to Prachi. She defends Prachi. She asks them not to blame her. Pallavi asks her not to defend Prachi always.

Dida tells that Ranbir has created all this mess. Rhea tells that she will go and get Ranbir and Prachi outside. Aaliya asks her not to worry, when she has the signed papers. Prachi thinks Ranbir doesn’t remember about her pregnancy. She lies to him. She covers the truth once again. She tells that he shouldn’t think of the good news if she falls sick. He tells her that he felt like she is pregnant. He adds that he is ready to stand by her, but she has to come to ask for his support. He promises to support her. She tells that they don’t need to be together to keep their vows.

She tells that she had much hopes from him. She tells him that they aren’t together, he didn’t keep his duty, he didn’t stay as her husband, he has to first decide his position. She asks him how did he marry Rhea, how did he feel to break his vows. They end in an argument. Prachi saves Ranbir’s name in front of everyone. She doesn’t want the family to scold Ranbir. She tells that he was just concerned for her. Rhea still scolds Ranbir for just caring for Prachi. She can’t tolerate this drama anymore. She asks Prachi to leave the house silently, because she lost all the rights on Ranbir. She tells that she has won the challenge. Prachi tells that no document can challenge her existence. She doesn’t value or acknowledge the documents. Stay tuned.

Reviewed Rating for Kumkum Bhagya 6th January 2022 Written Update Defeat drag: 4/5 This rating is solely based on the opinion of the writer. You may post your own take on the show in the comment section below.