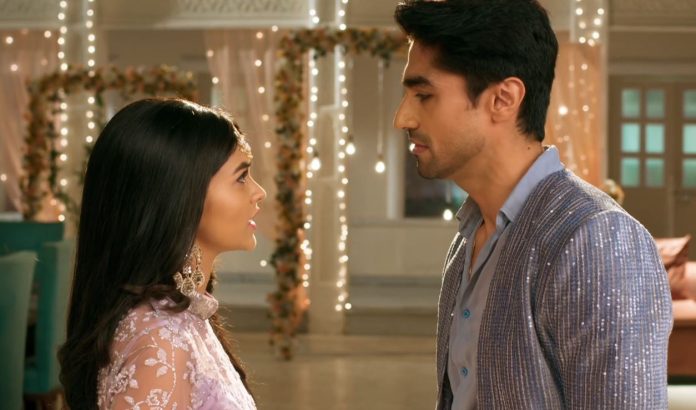 Yeh Rishta 6th January 2022 Written Update Post Engagement twist Bole Chudiyaan plays. Aarohi gets shocked to see Akshara dancing. Everyone except Aarohi and Harshvardhan smiles seeing Akshara. Abhimanyu too comes and dances. Akshara brings Aarohi to dance between her and Abhimanyu. Abhimanyu brings Manjiri in between him and Aarohi to dance. Neil stops Akshara from leaving. Kairav and Shefali start playing “dog in the pond” using a red handkerchief. He fools Shefali and wins the game round. Neil and Akshara play next. Abhimanyu replaces Neil and gives the Handkerchief in Akshara’s hands. Kairav notices the tension between Abhimanyu and Akshara.

Akshara and Aarohi continue dancing with Goenka and Birla females. Goenka and Birla males also dance. Everyone gets busy dancing in together. Abhimanyu tries to be near Akshara. While Akshara feels pain and cries going aside. Abhimanyu too goes aside and cries in pain. Akshara wipes her tears and gets shocked to see Neil behind her. Neil tells Akshara that she doesn’t need to say anything as he understands. He asks Akshara what has happened to her and Abhimanyu? Neil tells Akshara that she and Abhimanyu both aren’t ready to listen. He asks Akshara if she has lost it?

Akshara tells Neil that these talks are of no use now. She leaves, asking him to come as it’s time for the engagement ceremony. Neil punches the pillar in anger. Kairav asks Akshara where she was and how she came to Birla house. Akshara tells Kairav that Neil helped her to come through the back door. She asks Kairav to come as the auspicious hour for the engagement ceremony is fleeting. Aarohi smiles hearing Nishtha saying that her ring is very beautiful. Abhimanyu looks at sad Akshara. Shefali tells everyone that Abhimanyu’s ring is missing. Everyone gets shocked on hearing this.

Abhimanyu continues staring at Akshara. Harshvardhan asks where did the ring go. Shefali says it was in the box only. Anand says that she should have kept it carefully. He asks her to find it out as it may have fallen. Manjiri says she kept the ring in the box only and she saw it herself. Flashback shows Shefali taking ring thali from Manjiri. Shefali agrees that Manjri kept it in front of her and she checked it too. Harshvardhan angrily asks if the ring flew away. Manish asks Harshvardhan to calm down as the ring will be found. Shefali and others search for it. Mahima says how many hurdles will come in this marriage? Aarohi feels scared.

Akshara searches for the ring and finds it. She tells everyone that the ring was under the velvet box. While Aarohi gets happy, Abhimanyu gets angry. Suhasini says, “that many times people fail to see the things in front of them”. Abhimanyu continues staring angrily at Akshara. Akshara notices it. In a low voice, Neil tells Akshara and Abhimanyu that their love doesn’t seem hidden. He further tells them that only they think that love is not in their fate. He leaves Akshara and Abhimanyu shocked. Engagement ceremony commences. Abhimanyu makes Aarohi wear the engagement ring. Everyone claps. Aarohi smiles and looks at Akshara.

Families shower rose petals on them. Manjiru asks Aarohi to make Abhimanyu wear the engagement ring. Sad Akshara gives Aarohi the selected ring for Abhimanyu. Everyone gets shocked on seeing Abhimanyu’s ring finger injured. Manjiri gets worried for Abhimanyu. Abhimanyu calms Manjiri saying it’s a minor injury. Akshara recalls Abhimanyu’s fine ring finger that she saw at the time when Abhimanyu came to pick her and at the time of “dog in the pond” game. Abhimanyu tells Manjiri that he got injured after the dance through the lamp. Abhimanyu recalls himself crying in pain. He also recalls hurting his ring finger himself.

Nishtha says that now it’s selfie time with the bride and groom. Akshara asks Nishtha to first apply bandages on Abhimanyu’s injured finger. Abhimanyu looks at Akshara with anger. Manjiri says she will apply the bandage on Abhimanyu’s hand. Abhimanyu tells Manjiri that he is the doctor and will apply the bandage himself as it’s nothing serious. Aarohi asks Abhimanyu to apply some medication on his wound as it may get worse/deep. Abhimanyu tells Aarohi he will do it as he knows it better than her. He goes to take selfies with everyone. Kairav notices tears in Abhimanyu and Akshara’s eyes.

Abhimanyu leaves after the selfie. Aarohi tries to be happy. Mahima hears Shefali busy on the phone with her office work. Shefali explains to her that she is trying to balance between home and work responsibilities. She discusses with Mahima that she felt Abhimanyu injured his finger in anger. Mahima tells Shefali that Abhimanyu injured himself on purpose. Shocked, Shefali asks Mahima if Abhimanyu has second thoughts about his marriage with Aarohi? Mahima says yes. Shefali says if it is true then Abhimanyu should think before making this decision as it’s the question about his whole life. Mahima says she sincerely hopes that Abhimanyu thinks through every decision he takes.

On the other hand, Aarohi wonders if Abhimanyu injured his ring finger on purpose? She feels angry and asks herself to not think like this. Aarohi asks herself to now focus on fulfilling another dream of hers, which is to get a Masters degree. She tries to convince herself that she is best and will remain best in every field. Akshara brings Java plum leaves to apply on Abhimanyu’s wound. She tells Abhimanyu it was difficult to bring Fenugreek paste as it would take time. Akshara tells Abhimanyu that Java plum leaves also provide relief in pain. She says she brought it from a tree outside near the parking lot.

Akshara further tells Abhimanyu that hot/warm Java plum leaves will provide him quick relief from pain. Abhimanyu tells Akshara that no herb can reduce his pain. He tells Akshara that she won’t understand his pain and feelings. Akshara stops Abhimanyu from leaving and applies Java plum paste on Abhimanyu’s wound. After wrapping the bandage on the wound Akshara tries to leave. Abhimanyu stops her and asks her how the pain in his heart will get reduced. He asks her for some treatment and medication for it. Akshara cries when Abhimanyu tells her that he can’t tolerate the pain of his heart anymore.

Reviewed Rating for Yeh Rishta 6th January 2022 Written Update Post Engagement twist: 4/5 This rating is solely based on the opinion of the writer. You may post your own take on the show in the comment section below.