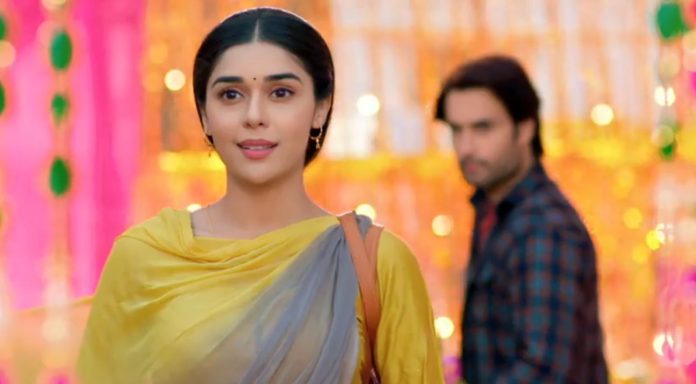 Sirf Tum 7th January 2022 Written Update Suhani’s new start At night, Rakesh is seen writing a letter or some application. He thinks his work was just a job for him, not a way to obtain something. He thinks it’s better to prove his point/innocence through his resignation. Rakesh puts the resignation letter in an envelope in anger. Next morning, Rishi informs Ansh about his plan’s success in the form of gossip. Ansh smirks at Riya and she smiles a little too. Raghav and John get alert hearing Suhani’s name from Rishi’s mouth. They try to wake up drunk Ranveer.

Ranveer opens his eyes when Raghav and John tell him that Suhani will not come to college from now onwards. They also remind Ranveer of Suhani’s internal beginning date. He angrily grabs John’s collar and asks him what he said? Raghav again tells Ranveer that Suhani isn’t permitted to attend college now. At Sharma house, Suhani is seen doing household work with her mother. Suhani’s grandmother asks Rakesh to have breakfast. Rajesh looks at Suhani and Sudha for a few seconds. Unaware of the truth, Rakesh tells his mother that his stomach got full with Suhani and Sudha’s ill actions.

Sudha and Suhani lower their eyes and Kamini smirks. He says that he hopes everyone must have understood what he said yesterday. Kamini smirks again. Rakesh leaves the house. Someone rings the bell. Nikki opens the door and gets shocked to see Ranveer in his (Night Dress) tracksuit. Other family members too get shocked to see him. In a low voice, Kamini says to Nikki that Ranveer came to create drama here too. Nikki says being so rich, Ranveer has no dressing sense as he came in night dress. She says maybe Ranveer isn’t able to concentrate on himself after meeting Suhani.

Ranveer goes towards Suhani and asks her why she isn’t ready to attend college. He also reminds her that her internals are starting from today. Nikki and Kamini feel confused and excited. Suhani’s grandmother recalls how Rakesh slapped Sudha the day before. Ranveer asks Suhani to get ready for college. Suhani’s grandmother folds her hands in front of Ranveer and requests him to not increase drama in their house as they already had enough. Ranveer angrily asks Suhani to get ready for college. Suhani requests Ranveer to not interfere in her family matters. Ranveer angrily asks Suhani if she is becoming a doctor for her family?

He further asks Suhani if she would treat only her family members after becoming a doctor? All the family members look at Ranveer with shocking expressions. . Ranveer asks Suhani if she wants other patients to die? He also asks Suhani who gave her the right to snatch a talented doctor from thousands of needy patients? Suhani’s mother and Grandmother feel shocked, while Kamini and Nikki feel irritated. Ranveer asks Suhani to keep it in mind that big dreams get fulfilled with big difficulties. Suhani’s grandmother and mother feel guilty while Kamini and Nikki don’t get affected.

Ranveer tells Suhani that it’s her dream and she has to fulfill it on her own. He also tells Suhani that situations and people will never react or go according to her. Suhani’s grandmother tells Ranveer that Rakesh’s obstinacy is standing in front of Suhani’s dream this time. She asks Ranveer how they can go against Rakesh’s decision? Kamini and Nikki smirks. Angry Ranveer stares at Sudha. Sudha notices it. He makes Sudha sit on the sofa. Ranveer tells Sudha that he has always seen the same fear in his mother’s eyes which can be seen in her eyes today. He tells Sudha that it’s husband’s fear.

Ranveer reminds Sudha that she made an apron for Suhani with “Dr. Suhani” knitted on it, thinking that one day Suhani will become a good doctor. He asks Sudha if she will keep that apron in the cupboard now? He further asks Sudha, will the apron go in the cupboard and Suhani’s dream outside the house? Suhani’s grandmother feels very guilty. Ranveer asks Sudha why she has lowered her eyes, as her status is bigger than anyone after god, being a mother. He asks her to raise her eyes. Ranveer explains to Sudha that issues or problems will get sorted out in the upcoming time. He says Suhani’s exams are not just exams but an opportunity. Ranveer explains to Sudha that if she loses this opportunity then her and Suhani’s dreams will end forever.

He asks Sudha to show courage for Suhani and her dreams for which they made uncountable sacrifices. Ranveer requests Sudha to show courage and fulfill her and Suhani’s dreams. He tells Sudha that now the decision is in her hands; if Suhani will become a doctor or will forget her dream forever. Ranveer reminds Sudha that she also saw the same dream for herself. He also asks Sudha if she wants Suhani to live in regret that her mother didn’t support her dream. Ranveer finally asks Sudha if she doesn’t want people to call Suhani as Dr. Suhani Sharma. He tells Sudha that it’s her and her motherhood’s exam too today. Ranveer further tells Sudha if she loses today, then no mother in the world would be able to give courage to her child to fulfill her dreams.

Ranveer asks Sudha to decide if Suhani would either be called “Suhani Sharma” or “Dr. Suhani Sharma”. Sudha recalls Suhani’s happiness when she got the opportunity and permission to become a doctor. Ranveer takes a leave. Sudha recalls Ranveer’s words, wipes her tears and goes upstairs. Nikki tells Kamini that Sudha seems like she will agree to Ranveer’s words. Kamini tells Nikki that no one dares to go against Rakesh in Sharma house. Sudha comes with Suhani’s college bag and wallet. She takes Suhani’s hand and makes her take God’s blessings. Sudha applies tikka on Suhani’s forehead.

She asks Suhani to give her exam as she will fight her father for her dreams. Suhani cries and hugs her mother. Kamini asks if she didn’t understand with one slap that she wants Rakesh to break her hands and feet. Suhani’s grandmother stops Kamini from calling and informing Rakesh about anything. She asks Suhani to move on and fulfill her dreams as whatever Ranveer said was right. Kamini and Nikki feel shocked by grandmother’s words. Sudha takes Suhani for her exam with confidence.

Reviewed Rating for Sirf Tum 7th January 2022 Written Update Suhani’s new start: 4/5 This rating is solely based on the opinion of the writer. You may post your own take on the show in the comment section below.