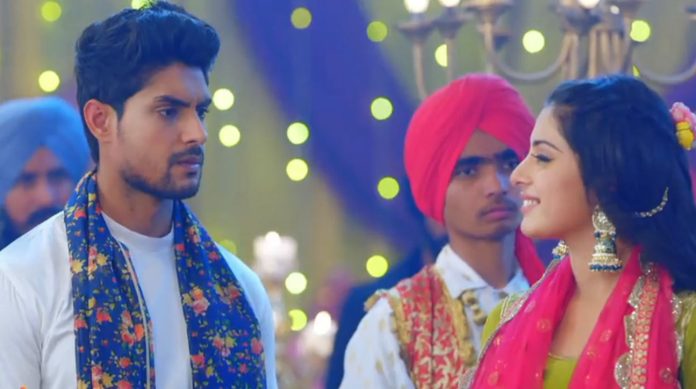 Udaariyaan 12th January 2022 Written Update Return gift Tejo and Fateh come close unexpectedly. Fateh has planned to spend time with Tejo and get a fair chance to apologize to her. He feels relieved that Tejo didn’t get distanced from him. While Fateh stays in his blissful space, Jasmin plans an accident at the camp site. She asks her aide not to make any mistake in the plan. She thinks Tejo and Fateh will not get spared this time. Fateh gets overjoyed when Tejo counts on him and trusts him like before. Jasmin tells that Tejo and Fateh would have not imagined whatever is going to happen with them. She is up to a big conspiracy. What role is Angad playing in Jasmin’s plan? Will Fatejo love story begin on a smooth note? What is Jasmin’s return gift for Fateh? Keep reading.

Earlier in the show, Gurpreet is scared thinking of Jasmin’s threatening to Fateh. She doesn’t want any risk for her son. Fateh relieves her saying he will handle Jasmin because he knows her limits well. He doesn’t want his family to live in fear. He asks Gurpreet to think of Simran and Buzo’s marriage, and also help him in winning Tejo back. He tells that he is aiming to restore Khushbeer’s prestige back. Gurpreet stays tensed.

Later, Tejo and Fateh prepare to leave for the college trip. Fateh replaces the other teacher to accompany Tejo on the trip, just to protect her from Jasmin. He instructs Buzo to convince his family for accepting Simran. He promises to speak to Khushbeer when he returns from the trip. Jasmin plans her revenge on Tejo and Fateh.

Tejo waits for the other teacher to leave for the college trip. Fateh arrives there and shocks her. She isn’t too happy to see him. She calls up her colleague and argues for lying to her about Fateh. She asks Fateh why is he doing this. She tells that she won’t forgive him. Fateh isn’t thinking of forgiveness this time, but of protection. He wants to protect her from Jasmin after the latter’s open challenge. Fateh and Tejo leave for the college trip. Tejo doesn’t find any seat for herself, and gets helpless to sit beside Fateh. Fateh is glad to spend time with her. The students request them to play Antakshari. Tejo and Fateh sing along with the students to keep their heart.

On the other hand, Satti spots Jasmin paying money to someone. She confronts Jasmin about the man and also about the funds. Jasmin tells Satti that the man works for her, and she has lots of funds. She adds that she can buy anything for Satti. Satti angrily beats her thinking she is earning by walking on the wrong path. Jasmin tells that she isn’t doing anything wrong, she is earning smartly. Satti doesn’t believe her. She asks Jasmin not to ruin the family name and come back home to have a decent living. Jasmin refuses to go home where she will be living under restrictions.

She tells that she is happy staying alone. She asks Satti if she is worried for Tejo. Satti tells that she is worried for her daughter. Jasmin mentions that Tejo always comes between her and her relations. Satti asks her to lower her hatred and anger for Tejo, else she will regret a lot later. Jasmin asks Satti not to have sympathy for her. She adds that once her surprise comes out, Satti won’t pity her and would know the truth. Satti asks about the surprise, but Jasmin doesn’t reveal any details. Satti grows worried and prays for Tejo.

Jasmin meets Angad and questions him if he has revealed her plans to Tejo to win her heart and love. She doubts him because he loves Tejo a lot. He tells that her idea is good, he can really tell Tejo about her evil plans, then Tejo will trust him like before and love him. She asks him not to do anything such, he will never get Tejo, who just loves Fateh. She tells that he can never win Tejo’s love, its better that he helps her in the revenge plan. He agrees to help her. They discuss their accident plan.

Angad tells her that everything is set, but her aide should be there on time. She assures it. She tells that her surprise will shock everyone, and then Angad’s surprise will be ruining them completely. Fateh takes care of Tejo on the way. He arranges food for Tejo and the students. Fateh and Tejo get shelter somewhere when the bus breaks down. The students dislike the place, but Fateh and Tejo convince them to make the most from the situation. Fateh tells that they can really enjoy the adventure which came unplanned. Tejo and Fateh come closer while settling the students. Fateh is happy seeing her smile. The students ask for food again, but Tejo isn’t able to cook because of lack of facilities.

Fateh tells that he will go and buy some food. Tejo attends the students in his absence, but gets worried when two of the students indulge in a fight. Tejo needs a first aid box for the wounded student. She goes on the highway road to find a medical store and buy the first aid kit. Fateh returns and doesn’t find Tejo. He learns that she has gone out an hour before. He rushes to find Tejo and grows too worried. Jasmin prepares to execute the accident plan, telling that Tejo and Fateh have no idea of the happenings. She boasts of herself that she is capable to ruin them alone. Satti grows worried because of Jasmin. She shares her concern with Rupy. They just wish Tejo’s safety.

Reviewed Rating for Udaariyaan 12th January 2022 Written Update Return gift: 3/5 This rating is solely based on the opinion of the writer. You may post your own take on the show in the comment section below.