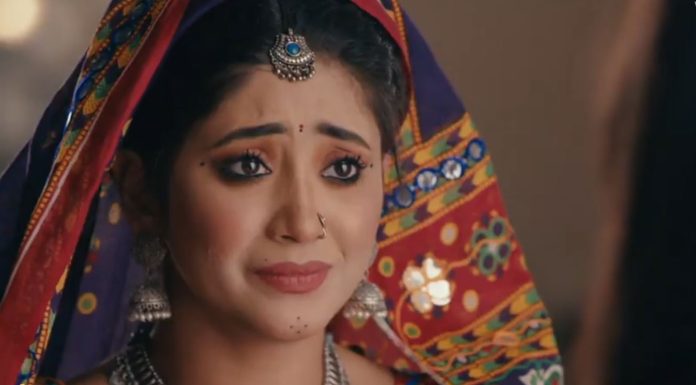 Balika Vadhu 14th January 2022 Written Update Disguised Anandi Anandi is seen praying to God. She hears someone continuously pressing their car horn. It turns out to be Kiara. Anandi gets shocked seeing her. Anand worries for Anandi. He recalls how Bhairavi gave him her swear to not stop Anandi at their house. He angrily thinks that this will ruin their relationship more. Anandi is seen at Kiara’s house. She thanks Kiara for giving her shelter. Anandi also thanks God. Kiara reminds Anandi of their college assignment. Anandi says she forgot to complete her assignment in all the past mess. Anand thanks Kiara for helping Anandi.

Kiara’s brother comes and angrily asks her why she brought Anandi to their house. He says by this their plan can get ruined. Diya calls her fiance and tells him that Bhairavi ousted her from the house. She tells her fiance that Anand is worried for Anandi. Kiara signs her brother to not tell Diya that she brought Anandi to their house. She tells her brother that Anandi would be of great help in their plan. Next morning, Sonia scolds Anandi for not telling her that Jigar sent her to prison with CCTV footage proof against her. Anandi tells Sonia that the CCTV footage that Jigar has is edited. Sonia tells Anandi that it doesn’t matter. She asks Anandi if she has any proof of her and Jigar’s child marriage.

Anandi replies that she is herself the proof. Sonia tells Anandi that the court needs and asks for proof. Anandi tells Sonia that she doesn’t understand the technicalities of law. Sonia leaves Anandi’s case knowing that the latter can’t pay her fees. Anandi gets tensed thinking that how will she fight her child marriage annulment case now. She will try calling Anand for help but the latter won’t pick her call. Anand thinks to try convincing Bhairavi to help Anandi.

Tense Anandi prays to God for help. Anandi finds a confident female lawyer assuring someone of justice. She goes to another lawyer and asks him about the confident lawyer. That lawyer tells Anandi that the lawyer she is asking about is the top lawyer of Ahmedabad, named Usha Sachdeva. He further tells Anandi that Usha is an annulment case specialist and their court’s star. Anandi goes to meet Usha but the latter’s assistant stops her. She asks Anandi to meet Usha with an appointment.

Anandi gets tensed hearing it. She finds a kid playing with magnifying glass. With the naughty kid’s magnifying glass, she gains Usha’s attention. Usha initially scolds Anandi for trying to grab her attention the wrong way. Anandi apologizes to Usha. She tells Usha that she desperately wants her help in her child marriage annulment case. Usha gets shocked hearing it. She gets convinced to help Anandi. Anand hears Bhairavi telling Sonia on call that it’s her choice if she wants to help Anandi in her child marriage annulment case or not. He gets angry hearing it.

Anand asks Bhairavi if she even doesn’t care about his feelings. In anger he reveals to Bhairavi that he has feelings for Anandi but the latter doesn’t have. Anand gets angry and leaves. Dia asks Bhairavi to not make Anand hate her more. Bhairavi tells Diya that she can bear Anand’s hate for his betterment. Anandi tells Usha about her child marriage and struggle story to Usha. Usha gets shocked hearing it. She asks Anandi if child marriages happen in the 21st century too. Usha agrees to fight Anandi’s case.

Anandi makes it clear to Usha that at present she doesn’t have money for her fees. She promises Usha to pay her fees slowly. Usha asks Anandi to not think about her fees and tells her that she will have to at least arrange money for paperwork, date changes and affidavits of her case. She gives Anandi her contact card. Anandi thinks about how she will arrange money for a lot of paperwork. She sees her parents’ photograph and gets an idea to use her mother’s jewelry. Anandi thinks to get her mother’s jewelry back from Raigarh.

Sejal is seen packing Anandi’s clothes and jewelry. On Maadi Baa’s questioning, Sejal says she is thinking of giving Anandi’s stuff back to her. Maadi Baa and Jigar take Anandi’s mother’s jewelry and plan to make Anandi struggle to get them. Jigar says this jewelry is Anandi’s last hope to survive financially for some time. Anandi reaches Raigarh to get her mother’s jewelry from Anjariya’s house anyhow.

Reviewed Rating for Balika Vadhu 14th January 2022 Written Update Disguised Anandi: 3/5 This rating is solely based on the opinion of the writer. You may post your own take on the show in the comment section below.