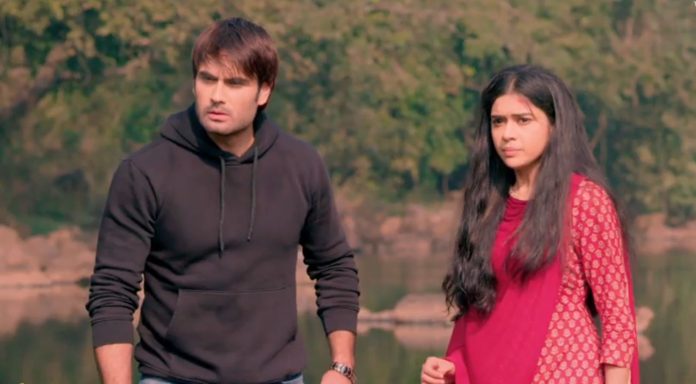 Sirf Tum 14th January 2022 Written Update Ranveer saves Suhani The tensed Sharma family tries to talk to Suhani through someone but fails. Sudha recalls that she saw Ansh with Suhani. On Rakesh’s questioning, Sudha tells him that she saw Ansh with Suhani in the same ambulance. Rakesh says that Asha gave him Ansh’s contact number once. He makes a call to Ansh. Suhani’s grandmother asks Sudha to not cry much as she may get ill. She tries to give strength to Sudha. Ansh picks up Rakesh’s call and asks him to not worry. He tells Rakesh that they are trying to bring the Ambulance up.

On the other hand, Suhani’s ambulance badly falls down in the river. Shocked, Ranveer screams Suhani’s name. Everyone present at the accident site gets shocked and scared seeing the dangerous accident. Ranveer recalls Suhani’s apology. He also recalls that Suhani offered him her hand-made “Carrot Halwa”, which he refused to have. Ranveer recalls how he continuously ignored Suhani and her apology. At Sharma house, Suhani’s grandmother and Sudha pray for Suhani. Suhani’s grandmother tries to calm the broken and scared Sudha. She asks Sudha to trust Ranveer as he won’t let anything happen to Suhani as he always saved Suhani from troubles.

Sudha tells Suhani’s grandmother that she is right that Ranveer won’t let anything happen to Suhani. She hugs Suhani’s grandmother. Suhani screams Ranveer’s name for help. Ranveer gets alert and asks Suhani where she is. Suhani continuously screams Ranveer’s name for help. Everyone sees that Suhani is stuck downwards on the cliff. Ranveer asks Suhani to wait as he is sending the rope. He angrily asks Raghav and John to bring the rope. They bring the rope immediately. Suhani tells Ranveer that her hands are slipping. Ranveer throws the rope towards Suhani. He asks her to not be scared as he won’t let anything happen to her.

Suhani grabs the rope. John and Raghav tie another rope to the tree and give it to Ranveer. Ranveer throws that rope towards Suhani. Worried, Riya and Dean reach the accident site. They get tense seeing the dangerous situation. Suhani tells Ranveer that her hands are slipping. Ranveer asks Suhani to not leave the rope and tells her that he is coming downwards to help her. Other students help Ranveer with the rope. Ranveer goes downwards towards Suhani. Suhani asks Ranveer what about Mita and other two ward boys. Ranveer asks Suhani to concentrate on saving herself first. Ranveer almost reaches Suhani. Riya calls Vikrant and tells him that Ranveer jumped with Suhani in the chasm.

She asks Oberois to reach the accident site soon. Shocked, Vikrant tells Riya that he will see what to do. He asks Mamta what to do as Ranveer staked his life to save an employee’s daughter. Oberois get shocked knowing it. Police inspector at Oberoi mansion asks Vikrant to calm down as they have sent their best team to rescue Ranveer and his college’s medical team. Vikrant asks the inspector to take care that at least Ranveer should not get harmed. Mamta worries and prays for Ranveer. At the accident site, Riya asks Ranveer why he is risking his life with Suhani. Ranveer ignores Riya. Dean calls and asks the rescue team to come fast. While giving her hand to Ranveer, Suhani falls down in the river.

Everyone gets shocked. Ranveer screams Suhani’s name and jumps into the river behind her. This shocks everyone present there to the core. At Oberoi mansion, Mamta saves the diya from getting extinguished. She gets scared and prays to God to save everyone. In the river, Ranveer searches for Suhani. He even goes deep into the water. Ranveer finds Suhani unconscious and brings her to the waterside on his shoulders. He presses Suhani’s stomach to make her puke the water out of her system. Suhani gets conscious and hugs Ranveer’s arm tightly. Ranveer asks scared Suhani if she is fine.

Suhani asks Ranveer if he is still angry with her as he called her Suhani instead of Miss Zimmedari. Suhani again apologizes to Ranveer for misunderstanding and scolding him. She promises to Ranveer that she will never misunderstand or scold him. Ranveer tells Suhani that he couldn’t have forgiven himself if something would have happened to her. He further tells Suhani that she is his real responsibility. Suhani smiles when Ranveer once again calls her Miss Zimmedari. She convinces Ranveer to let her accompany him in search of the ward boys and Mita. Ranveer tells Suhani that he is proud of her as she cares for everyone in both happiness and pain.

Suhani tells Ranveer that he only taught her all this and also her duty being the doctor. Both of them start searching for Mita and ward boys. They reach Mita and ward boya through fallen medical supplies. Ranveer helps the ward boys while Suhani helps Mita. Mita and ward boys get conscious. Suhani being the first year medical student feels tense seeing Mita’s wounds. Ranveer gives Suhani the strength to treat Mita and complete her doctor’s duty. Suhani leaves her emotions on side and treats Mita. She sees Ranveer in pain due to a sprain in his hand. Suhani puts some small sticks on Ranveer’s sprained hand and treats it. Ranveer looks at Suhani with love.

Reviewed Rating for Sirf Tum 14th January 2022 Written Update Ranveer saves Suhani: 3/5 This rating is solely based on the opinion of the writer. You may post your own take on the show in the comment section below.