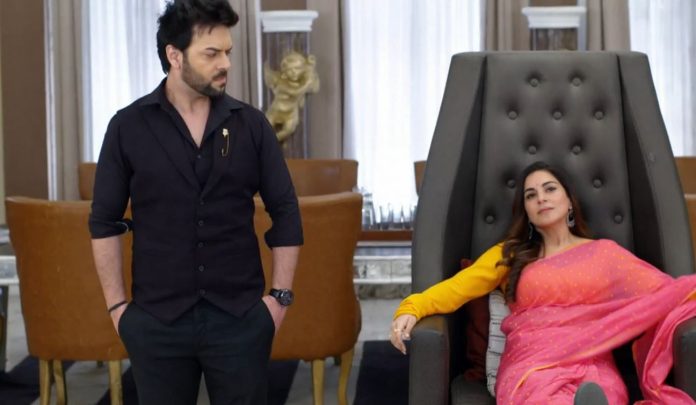 Kundali Bhagya 18th January 2022 Written Update Preeta’s shock Prithvi calls Naagre to give the news of Preeta’s death. Naagre congratulates him. Prithvi asks him if the goon has called him. Naagre tells that he understood this by hearing Prithvi’s joyful speech. Prithvi tells that he has got relieved that Preeta is dead. Naagre tells that Preeta is still there, she is a fire who can burn Prithvi. Prithvi asks him to end singing praise of Preeta, she is dead. He invites Naagre home for a celebration. Naagre refuses to visit Prithvi.

Prithvi commands him to come and support her. Naagre outright refuses and turns angered. Preeta prays to Naagdevta to spare her life and return. She tells that she has to save many lives in the Luthra mansion. The snake leaves after hearing her prayer. Preeta gets motivated when she gets a new life. She tells that she will save the family from Prithvi. She tries to get away from the van before it blasts. She breaks the rod and frees herself from the handcuffs. She gets down the van in time. The van blasts, but she gets saved. Karan and Sameer want to find out where did Preeta go. Sameer gets some hint and asks Karan to come with him.

Inspector stops Karan to question him. Karan tells Inspector that Preeta and he had a fight when he last met her, he was too angry. Sameer tells that it was a normal fight between them. Inspector doubts that Karan is involved. He asks Karan if he was too angry that he could have killed Preeta. He tells that Preeta isn’t arrested by the police, he has no proof to testify that he is saying the truth. He blames Karan. Prithvi meets Mahesh and wakes him up by pouring water over his face. Mahesh pleads him for life.

Prithvi thanks him for giving him everything. Karan asks Inspector what does he mean to say. Inspector tells that many such people come to file a fake complaint and then hide their crime. Karan tells him that he doesn’t know his relation with Preeta. He adds that Preeta was arrested for attempt to murder Naagre. Inspector tells them that Naagre is really dangerous, if Naagre is involved, then the unthinkable can happen with Preeta. He tells that Naagre will tell them about Preeta. Prithvi tells Mahesh that he has become the owner of the Luthra empire because of him. Mahesh attacks Prithvi in rage.

He tells that Prithvi won’t get anything, Karan will get everything. Prithvi later informs the family that he will make an entry in the party as Kritika’s husband. He convinces Kritika as well. Kareena grows worried for Kritika, who has really gone mad for Prithvi. The Luthras wait for Karan’s return. Preeta and Karan will return home and shock Prithvi by snatching the power from his hands. Keep reading.

Prithvi tells Mahesh that he will kick out both Karan and Rishabh from the company today. He tells about the inauguration of the luxury township. He adds that he will get the best businessman award, and the credit goes to Mahesh. He looks forward to become a business tycoon. He tells that he will be successful just because of Mahesh. He thanks Mahesh. Mahesh angrily attacks him. He tells that the business belongs to his sons. Prithvi shouts for help. Mona comes to his help. Prithvi leaves from there. He asks Mona how is Mahesh recovering. Mona remembers Preeta’s warning.

He tells her that they have to change the strategy. He wants Mahesh to show his fear in the party, he should become a joke in front of the people. He asks Mona to scare Mahesh of the snake, then Mahesh will scream and people will laugh at him. He plans Mahesh’s humiliation. He wants Mahesh to be proved mad in front of the world. He tells her that the people will give a new name to Mahesh, that’s an insane man. The family women get decked up for the party, even when they aren’t happy. Prithvi comes to meet them.

He compliments them. He tells them that they shall behave good in front of the guests like he cares for them, he treats them well. He asks them to entertain the guests and appear like a happy family, else it won’t be good for them. He asks Kritika to hold his hand and come with him. He tells that he will introduce himself as Kritika’s husband. Kareena gets worried. He asks them to behave well, else he will behave badly with them once the party is over. Kritika gets helpless to act happy.

Prithvi and Kritika attend the guests. Naagre arrives in the party. Prithvi introduces his family to the guests. The guest likes the loving joint family. Prithvi pretends to be a family person to impress the investor. He tells that he is happy to be with Luthras, who regard him a son. Prithvi attends important guests. He awaits the media. Prithvi answers the media, and finds Naagre missing. He wonders where did Naagre do. Prithvi thinks to fake love for his family in front of the MLA and the investor. He performs in the party with Kritika. Sherlyn and Natasha join him on the dance floor.

Naagre gets a shocking news. He finds Karan arriving home with the police. Karan asks the Inspector to arrest Naagre. Inspector tells that he will arrest Naagre after getting some proof. Prithvi disappears from the party. Naagre gives a speech to welcome the person on stage, who would take the Luthra business to new peak. He tells that the person is a strong pillar of the family, the best of the best. He welcomes Preeta Luthra on stage. This shocks Karan and the entire Luthra family. Preeta thanks the guests for coming.

Rakhi is happy that Karan has brought Preeta home. Preeta tells that she is really grateful to them for coming in her party. She thanks Naagre for the help. Karan and Luthras get puzzled. Preeta gets the credit of the new township venture. Sherlyn wonders what is Preeta doing home. She looks for Prithvi.

Reviewed Rating for Kundali Bhagya 18th January 2022 Written Update Preeta’s shock: 3/5 This rating is solely based on the opinion of the writer. You may post your own take on the show in the comment section below.