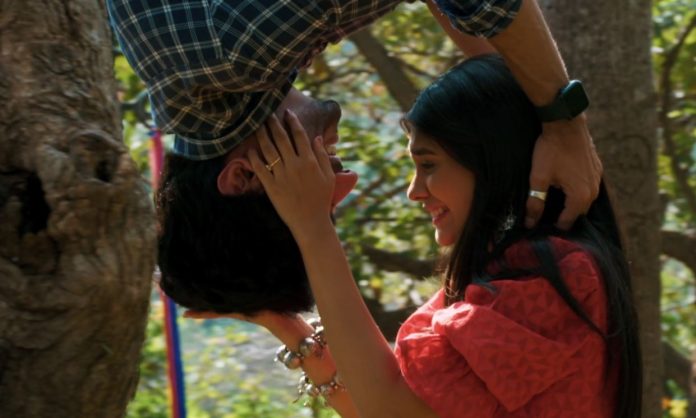 Yeh Rishta 20th January 2022 Written Update Secret Wedding Abhimanyu grabs Akshara in his arms and caresses her. Akshara asks Abhimanyu to leave her as someone may see them. At Birla house, Parth tells everyone that Neil is not ready to say anything and is repeating that Abhimanyu will come and tell. Anand feels tense about the situation. Shefali thinks if Aarohi is the reason behind whatever is happening. She further thinks that she informed Mahima about everything by messaging her. Shefali also feels tense thinking what is going to happen.

He tells Akshara that he wants his answers. Abhimanyu asks Akshara to meet him at sunset point till 4 pm with all answers to his questions. He warns Akshara that she can’t imagine what he will do, if she doesn’t come. Abhimanyu leaves and Akshara gets shocked and worried with Abhimanyu’s words. He leaves Goenka house by jumping outside. Akshara asks Lord why he puts her only in this type of dilemma. She thinks to clear everything from Aarohi and calls her. Aarohi doesn’t pick Akshara’s calls. On the other hand, Abhimanyu asks Neil if Manjiri came back. Neil says not yet. Abhimanyu tells Neil that he will return when he will get answers to all his questions, otherwise not.

Neil gets happy with Abhimanyu’s words. Kairav goes to see Aarohi’s bridal look. Inside the room, Akshara continuously calls Aarohi. Aarohi picks up the call and disconnects it by rudely telling Akshara that she is returning. She doesn’t hear what Akshara wants to say, which makes Akshara angry. Akshara pushes the furniture in anger. Kairav asks Akshara if she and Aarohi are fine. Akshara makes an excuse and Kairav leaves. She vents out her anger on pillows and cries. She recalls Abhimanyu’s words and sees that the time is 3:32 pm. Akshara secretly jumps out of her house. She runs towards the sunset point. Akshara recalls Sirat’s words, when she asked her to never leave Aarohi’s support as she is young and stubborn.

She continuously runs towards the sunset point recalling Aarohi’s words, when the latter asked her to not create an issue with her small lies. She sees that time is 4:02 pm, recalls Abhimanyu’s warning and runs. At Birla house, Harshvardhan gets angry with Abhimanyu’s absence. Neil smiles thinking that everything will get alright now. Harshvardhan blames Manjiri for loving Abhimanyu so much and giving him freedom. Parth reminds Harshvardhan that he only asked Manjiri to go somewhere. He asks Harshvardhan why he is behaving like the marriage broke. Harshvardhan feels tense and frustrated. At Goenka house, Kairav, Swarna and Suhasini sees Akshara’s written note asking them to not disturb them as they are making pre-wedding videos and reels for social media.

Harshvardhan tells Anand that feels something has happened at Goenka house. Kairav also feels something is going on. Akshara reaches sunset point. She shouts and asks Abhimanyu where he is. Tense, Akshara finds Abhimanyu’s headphones on the ground. Harshvardhan gets angry hearing that everyone came except the groom. Akshara shouts and searches for Abhimanyu. Abhimanyu sends her voice note telling her that she shouldn’t have let the wrong happen to them. In the second voice note, he tells Akshara that she thought of everyone except him. Akshara says this was not her intention. She asks Abhimanyu to come in front of her as she wants to tell him everything.

Akshara throws her phone and requests Abhimanyu to forgive her and return. She shouts and tells Abhimanyu that she will die without him. Abhimanyu comes in front of Akshara by hanging from a tree. “Lag Jaa Gale” plays in the background. Akshara and Abhimanyu caresses each other in their present position.

In the next episode, Abhimanyu will ask Akshara to consider it as a sign of Mahadev. He will tell Akshara that they will marry each other here and right now. Birlas will tell Goenkas that they came with full preparations but Abhimanyu is missing. This will shock Gonekas and Aarohi. Abhimanyu will be seen taking Akshara with him to a temple. Aarohi will tell everyone that Akshara is missing too. This will shock everyone. Aarohi will leave to reach Abhimanyu and Akshara. Before leaving, she will say that Akshara is trying to snatch her dreams from her. She will say that she won’t let this happen. Akshara and Abhimanyu will be seen sitting inside the temple.

Reviewed Rating for Yeh Rishta 20th January 2022 Written Update Secret Wedding: 5/5 This rating is solely based on the opinion of the writer. You may post your own take on the show in the comment section below.