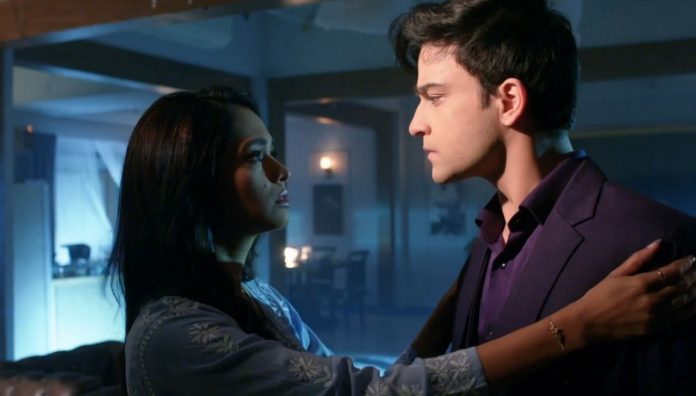 Kumkum Bhagya New Love Story Pranbir 21st January 2022 Ranbir comes home. He stumbles when he walks in the darkness. Prachi arrives there to help him. They get into a moment. He asks her to leave him, he doesn’t want her help. She tells that she didn’t come to help but to save him from falling. He replies that that she had come to make him fall down and ruin his life, she is already doing that work. She tells that she should do whatever she likes, and he will also do what she likes. She gets sinking in his eyes. They have a love moment. He leaves from there. Shahana finds them in pain. Prachi goes to her room and cries.

She thinks Ranbir is doing what she wants, but she is feeling bad. She doesn’t want Ranbir to affect her. She tells that she should not think of Ranbir and his emotions. She wonders why is she so affected. She stops crying and consoles herself. She recalls Sushma’s words. She feels sad. She doesn’t have Sushma with her to share the sorrow. She sees Ranbir’s picture and rebukes her. She tells that she left everything for his sake, but he has left her alone and married Rhea. Ranbir finds Shahana at the dining table, sitting lost and sad.

He shows concern as a friend and asks her the matter. He gives her a glass of water. He asks does she have to talk to him. She tells that she wants to tell something, but he may not like it. He tells that their relation is different, they are friends and she is also like his younger sister, she can share any matter. He asks her to say. She recalls Prachi’s truth. He calms her. He asks her to tell him everything. He promises to understand everything. She tells that she wants to tell about the baby.

Prachi tells that she wanted to tell Ranbir about the baby but then she gets the past visuals, how Ranbir always boasted of his love, but didn’t value her and her love, he doubted her character and ended their ties. She tells that she had thought a lot about their baby, but he ruined their family before it got completed. She doesn’t want to forgive Ranbir. She tells that if he doesn’t care for her, then even she will not have any hope from him. She encourages herself to stay alone and strong. Shahana tells Ranbir that maybe he doesn’t understand it. He tells that he understands her, she is going to become a mother, she should be proud, she shouldn’t worry thinking she is alone, the baby doesn’t need a father’s name. He is ready to help her.

She tells that she will be in guilt if she doesn’t tell him the truth of the baby, because he is the one who deserves to know it. Will Shahana tell him the truth? A new love story between Ranbir and Prachi will begin, when he tries winning her by making her jealous using Rhea. Rhea will get be-fooled of love by Ranbir, who attempts to make Prachi profess love. Keep reading.

Reviewed Rating for Kumkum Bhagya New Love Story Pranbir 21st January 2022: 5/5 This rating is solely based on the opinion of the writer. You may post your own take on the show in the comment section below.