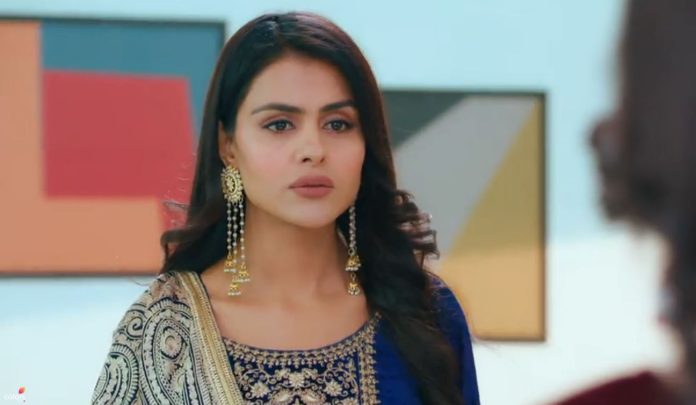 Udaariyaan 21st January 2022 Written Update Tejo confronts Jasmin Fateh and Khushbeer decide to find out the details of the accident case. They want to find out the deceased person who died in the accident, so that they can meet his family and find some way to compensate for the loss, just to save Amrik from the accident case. They don’t know anything about the case investigations and records, and think Amrik is too scared by his jail stay of one night. They think they can find help if they meet the police and clarify Amrik’s stand in the case.

Fateh tells Amrik that they are going to the police station to know the case details. He asks to let them find out what happened that night. Amrik begs him not to go and make things worse for him. He is scared thinking of Jasmin’s words that he will get hanged to death or get a imprisonment of ten years if his crime is proved. He doesn’t want to be proved guilty. He expects his family to help him. Fateh tells that he has to go and find the details for once, only then he can help Amrik and save him. Fateh asks Amrik to let Khushbeer and him to go. Amrik begs them to stop, but in vain.

Amrik tries hard to stop Fateh and runs after the car, but Fateh doesn’t listen. Jasmin doesn’t think Virks have no solution to Amrik’s problem, because its a fool proof plan. She celebrates her success, while Tejo arrives to her place to confront her. Jasmin taunts on seeing Tejo that the latter spoilt the entire day. She tries to shut the door on Tejo’s face, but Tejo stops her.

Earlier in the show, Khushbeer and Fateh try to find out some way to save Amrik. Rupy and Satti apologize to the family that they are the unfortunate parents of Jasmin. Gurpreet doesn’t blame them, but Khushbeer gets rude towards Rupy once again. He asks Rupy to leave. He thinks of saving Amrik by hiring a good lawyer. Angad tells Tejo about his madness growing within him. He seeks her help and support, and tells that he doesn’t want to hurt her by staying in her life. He tells that he will go far away from Tejo’s life and let her unite with Fateh. Tejo tells that she will help him deal with his emotional peaks. She sympathizes with him and they have a hug. Tejo returns home and learns about the new problem created by Jasmin at Virk house. She grows worried for the Virk family. She decides to confront Jasmin.

Tejo gets worried for Amrik after Rupy and Satti return home and tellher everything that Jasmin did. She wishes that Amrik gets rid of this problem. Rupy feels cursed to get a daughter like Jasmin. He wishes to die than seeing such times. The family consoles Rupy and takes care of him. Fateh and Khushbeer decide to go to the police and seek help. Simran asks them to be sure first else their plan can backfire, and put Amrik in more trouble. She tells that Jasmin is confident and she has planned everything leaving no scope for helping Amrik. Fateh tells that he thinks Jasmin has planned everything since the start, else it can’t be a coincidence that she reached there at the same time when the accident happened.

Fateh tells that he will surely go to the police and find the solution to the whole mess. Tejo enquires about Amrik from Fateh. Fateh tells her that Amrik is really sad, and even he is terrified thinking of Amrik’s future. He takes her permission to meet her once so that he gets at peace. Fateh puts Amrik to sleep and goes to meet Tejo. She encourages him to take the police help and put a stop to Jasmin’s crimes. She tells that they can’t live under fear that Jasmin will harm them, they have to involve the police and shut up Jasmin from making such wrong demands.

He tells her that he suspects someone is helping Jasmin in the whole plan. Tejo asks Fateh to stay strong and support his family. She wishes him all the best for the next day when he goes and meets the police. She wants Fateh to find a way and save Amrik. The Virks are worried for Amrik. Fateh and Tejo share a moment. She asks him to go home and stay with his family as their strength. She also thinks of meeting Jasmin to confront the latter for her motives.

Both the family pray for Amrik. Tejo knows that Jasmin has planned this. She thinks there is something hidden that she isn’t able to realize. Amrik learns that Fateh is going to the police station. He panics that his life will be ruined, he will surely get punished if they go to the police. Fateh tells that the accident might be Jasmin’s plan, they will find out the truth from the police. Amrik tells that he will kill himself if police comes to arrest him again. Fateh asks him to trust him, he will not let anything happen to Amrik.

Meanwhile, Tejo goes to meet Jasmin, while Fateh and Khushbeer leave for the police station. Tejo meets Jasmin and asks her to not target the family members when her revenge battle is on with Fateh and her. She tells that Amrik is innocent. Jamsin tells that Tejo is the reason that she has become evil. Tejo asks her not to blame her, its Jasmin’s own bad deeds that everyone hates her now. She tells that Amrik is not at fault and she will not let anything happen to Amrik. She promises Jasmin that she will never unite with Fateh and stop meeting him, but Jasmin should spare Amrik’s life.

Jasmin calls her a great person to make a sacrifice again. Tejo can really do anything to save Amrik. She knows Virks are sinking in sorrow. Amrik goes missing, while the entire family looks for him. They call Fateh and inform him about Amrik. They find Amrik’s suicide note and panic. Fateh calls up Tejo to inform about the suicide note. Tejo asks Jasmin about Amrik. She tells that if Amrik dies, then Jasmin will get arrested for provoking him for the suicide.

Jasmin doesn’t want Amrik to die, because he is a weapon of revenge for her. She tells Tejo that she wants to marry Fateh just to take revenge on Virk family. She hates Virks and wants to destroy them. Tejo and Fateh rush to Virk house to find Amrik. Tejo is shocked to find Amrik lying in the bathtub after cutting his wrist. She can’t believe the terrible sight. Tejo saves Amrik’s life, while Jasmin attempts to harm Amrik’s mental state once again. Fateh finds the fake accident’s truth and teaches a lesson to Jasmin. Keep reading.

Reviewed Rating for Udaariyaan 21st January 2022 Written Update Tejo confronts Jasmin: 3/5 This rating is solely based on the opinion of the writer. You may post your own take on the show in the comment section below.