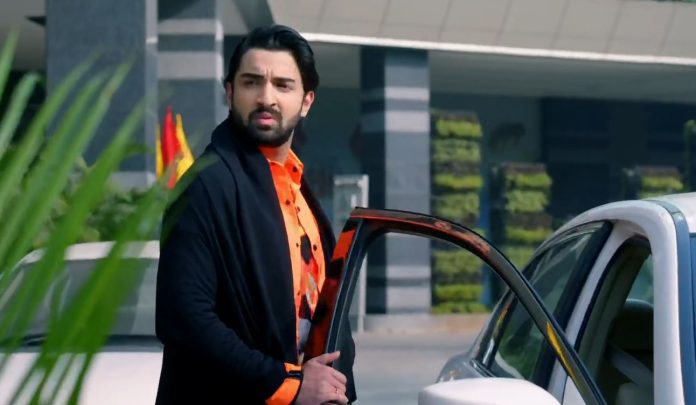 Bhagya Lakshmi 24th January 2022 Written Update Rishi heroic entry Lakshmi gets arrested by the police when Vishal suddenly blames her for making advances to get a job in the company. He tells that he didn’t molest Lakshmi, it was Lakshmi who was forcing him. Lakshmi is shocked by his accusation. Her character gets assassinated because of Vishal. The people onlooking the drama accuse Lakshmi for being so characterless to lower her dignity for the sake of a job. Lakshmi defends Vishal’s accusations but in vain. She has no proof against him to prove his fault. Vishal takes revenge on her when she refuses to oblige his wrong demands. He creates this big scene before Lakshmi goes out and tells the truth to everyone.

He answers Lakshmi’s threatening this way. Lakshmi sheds tears of sorrow. She didn’t know she will face such a bad time when she attempts to become self-dependent. Rishi is also in the same office building. He gets to pass through that corridor where Lakshmi gets arrested and bears the false accusations. He finds Lakshmi broken by the accusations. Rishi shouts Lakshmi and runs to her rescue. Rishi takes a stand for his wife’s character and saves her in the upcoming track. Keep reading.

Earlier in the show, Lakshmi bags a job. HR Manager Vishal tells Lakshmi that she has to do cleaning and dusting of the storage room, she has to do record keeping. She takes the job and thanks him. She falls into a big trouble. He asks her to come along, he will explain her the duties of work. He takes her to the storeroom to show some files. He kicks the ladder to make Lakshmi fall down. He holds her close and acts of saving her. He misbehaves with Lakshmi and tells that he was pretending till now to get close to her.

Lakshmi is shocked to know his real intentions. Rishi feels strange on sensing that Lakshmi might be in danger. Later, Neelam and Ayush visit Pritam and Rano at their house. Pritam asks Neelam how did she come. She asks Pritam to call Lakshmi home right away. She tells Rano that she will not let Rishi and Lakshmi’s divorce happen. She challenges Rano. Ayush is happy that Rishi’s divorce isn’t happening. Lakshmi gets molested by that man in the office, while Rishi reaches there.

Pritam tells Neelam that Lakshmi isn’t answering the call. Rano misbehaves with Neelam and reminds how the latter insulted her in Oberoi house. Pritam takes Rano with him. Neelam asks Ayush to ignore Rano. Rishi tells Vishal that he has other work. Lakshmi goes with the HR Manager Vishal. Her file papers drop. Rishi picks it for her and hands over to him. He doesn’t see Lakshmi, who also senses him around. Pritam and Rano get into a heated argument about Oberois and Lakshmi’s matter. Rano tells that she has presented the divorce papers from Lakshmi’s side. He wants to tell that Lakshmi didn’t send the papers, she doesn’t want the divorce.

Rano asks him to understand Lakshmi’s feelings, Lakshmi signed the divorce papers and she really wants a divorce. She tells that she is better than him. He can’t believe that Lakshmi wants the divorce. Lakshmi gets to see the storage room. HR Manager Vishal fools her and asks her to shut the door to stop the dust from coming out. He tells her that he will show her about cleaning the racks. He gets a ladder for her and asks her to climb it to get the books. Lakshmi climbs the ladder, while he tries to touch her. He intentionally makes her fall down the ladder. He holds her in arms. She apologizes that she lost the balance. He tells that he got hurt. He flirts with her.

She gets away from him. He asks her not to do a drama if she wants a job. She asks him to leave her. She shouts for help. Her voice reaches Rishi. Rishi stops leaving in his car. Lakshmi asks Vishal to not dare touch her. Vishal molests her and asks her what will she do. She answers him with a slap. He tells that she can’t do anything, she will have to make his spoiled mood better now. She tries to free herself and run out of the storeroom. He tells her that she is married, but it doesn’t matter to him. She lectures him and tells that she just loves her husband, she belongs to her husband and he can’t dare to impure her sindoor. She tells that she shall enjoy and not let her husband know about it.

She recalls the way Balwinder tried to molest her. Rishi leaves from the office. He thinks of Lakshmi. He limits his mind from thinking about her. His friend Vishal calls him and informs that he forgot his file. Vishal tells that he will send the file home. Rishi thanks him. He changes his mind and calls Vishal to inform that he is coming back to pick the file. He thinks if his heart wants to see Lakshmi.

He thinks he is really foolish. He misses Lakshmi. Lakshmi tells Vishal that she can take Chandi and Durga avatar. He asks her not to lecture him. She pushes him and reaches the exit door. He tries hard to stop her, but she runs away. He swears to not do anything wrong with her. He tells that if she tells anyone about him, then he will ruin her career. Lakshmi asks the women staff to help her and save her from Vishal. Vishal pretends clean and innocent in front of everyone. He tells her that she can’t get a job by using her charm, he was agreeing to give her a job, but she wanted the job immediately and started to flirt with him, she was ready to do anything to get a job and came close to him.

Lakshmi calls it a lie. She tells them that Vishal offered her the job and took her to the storage room, he tried to molest her, and spoke dirty things. She tells that she came out running and he threatened her instead. She asks them to call the police, she wants to complain about him. One lady from the staff pities Lakshmi and realizes that she is saying the truth, because Vishal is really a bad guy. Lakshmi and Vishal accuse each other. He tells that h can prove the truth, the cctv of the storage room will bring the truth out. Lakshmi isn’t scared because she is right.

Rano tells Neelam that Lakshmi will get the divorce. She threatens that she will file a case on Neelam for cheating Lakshmi. Neelam asks Pritam to talk to Lakshmi. She tells that she will help herself, Rano can never imagine her move. She doesn’t to pay any respect to Rano. She tells that she will not let the divorce happen. Ayush happily hugs Rano. He tells that the plan has backfired, none can stop Neelam. He knows Rano is lying, Lakshmi can never ask for divorce. He tells that it will be fun to prove her wrong this time. He prays that Rishi and Lakshmi stay together. He also prays that Rano gets some sense. Pritam asks Rano not to create troubles for him.

Police arrives on Vishal’s call. Vishal complains about Lakshmi and lies about her character. He tells that she is now accusing him of molestation. She tells that Vishal is lying. Vishal asks Inspector and staff to see the cctv footage and find the truth. He shows the footage to them and accuses Lakshmi for having a bad intention. Lakshmi tells that Vishal is lying, she is innocent. She rebukes Vishal for disrespecting a woman. Rishi comes there to pick the file. He sees the crowd.

Vishal asks Inspector to take Lakshmi with him. Inspector tells that Lakshmi is proved wrong in the cctv footage. She begs them to believe her. Vishal tells that she isn’t a decent girl. She pleads with them to believe her. She breaks down. He hears Rishi shouting her name. Rishi and Lakshmi see each other. He throws his file and runs to Lakshmi. He finds her handcuffs. He asks her the matter. Lakshmi cries seeing him. Rishi hugs her. He shares her sorrow and consoles her.

Reviewed Rating for Bhagya Lakshmi 24th January 2022 Written Update Rishi heroic entry: 5/5 This rating is solely based on the opinion of the writer. You may post your own take on the show in the comment section below.