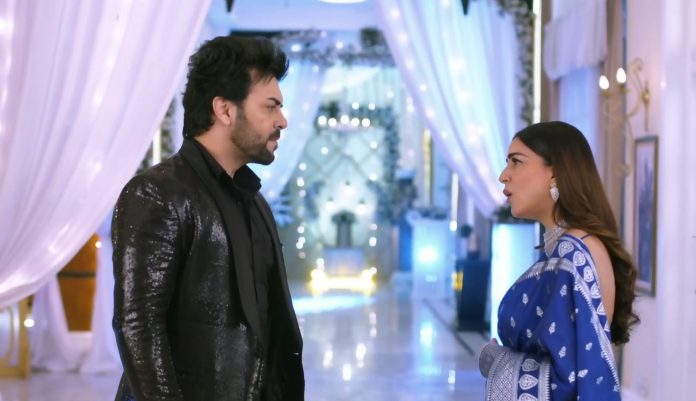 Kundali Bhagya 24th January 2022 Written Update New plot Prithvi meets Preeta and vents out his anger. He congratulates her for her victory. He welcomes her back from the death. He tells her that she has got a good fate that she tricked death. She asks him is he such a big coward that is too terrified that a woman will snatch everything for them. She rebukes him for sending four goons to get her killed. She asserts that she is not the old Preeta now, she is the new Preeta who can defeat over four hundred goons. Preeta challenges him that she will defeat him and his army. Prithvi decides to strike Preeta in a way that she is left with no option than to leave the Luthra house what is Prithvi planning against Preeta? Keep reading.

Earlier in the show, Janki regrets seeing the family losing their minds. She tells that Sherlyn and her sister are doing something wrong, they have some secret. She is sure that Sherlyn is still involved with Prithvi. She thinks to tell Preeta about her findings. Janki tells Preeta that she wants to tell her about Sherlyn, who isn’t trustworthy, Sherlyn and Prithvi are together. She tells that Sherlyn is acting helpless, that Rishabh left her alone, but actually she makes other helpless.

She reminds Preeta how Sherlyn insulted her and ousted her from the house. Preeta remembers everything how Sherlyn had questioned her intentions. Preeta tells that she isn’t the old Preeta to trust anyone so easily. She has changed now because of the family’s misbehavior. She tells that she will not give any chance or forgive the wrongdoers, she will punish them.

Preeta tells Janki that she has changed because of the wrongdoer’s behavior, she will punish them. Janki likes her confidence. She tells Preeta about Sherlyn and Natasha’s evil conspiracies. She asks Preeta to be careful and not step into any trap. Preeta asks her not to worry for her, she has changed now and she will not spare anyone. She knows that the Mahabharat is happening in the house, she will fight it and win it. She tells that Prithvi and Sherlyn should think of getting themselves saved from her wrath. She tells that she will punish her enemies, the problem will come on her enemies, because she has herself become a trouble for them, they shall think how they will save themselves from her.

Janki likes her courage and confidence. She asks Preeta to move ahead and fight. She promises to always be on her side. She blesses Preeta. Janki tells that Preeta has become a tigress now, who will snatch everything from Prithvi and end the devil. On the other hand, Natasha stops Prithvi and tells him that she knows how to stop Preeta from snatching the powers. He tells that Preeta isn’t snatching anything from her, but him. She wants the money from them to open the dance academy. She tells that she was going to win Karan and receive money from her, but Preeta flopped her plan.

She tells that Preeta had stolen the luxury town project, dreams and identity from Prithvi, she is super smart, but she will also have a weakness. She tells that its time to cut down Preeta’s wings and bring him on the ground. She swears revenge on Preeta. She tells Prithvi that he doesn’t know her. He tells that he has no time to hear her nonsense. He asks her to come to the point, how will she stop Preeta. She tells that she can deal with Preeta all alone. She apologizes for her deceptive behavior of a sweet girl.

She tells that she is street smart, she can do anything to win the fight. She asks Prithvi to let her execute her plan, then Preeta will fall in everyone’s sight. Prithvi asks Sherlyn what is Natasha planning. She tells that she doesn’t know. He asks her if she is really ignorant. She asks him not to vent anger on her. Sameer informs Karan that Shrishti is angry on him. Karan asks him to show anger back to her. Sameer tells that he doesn’t want to fight. Karan asks if he wants to love Shrishti. Sameer asks his help. Karan advises him to say sorry to her and also confess love to her at the same time.

He tells that he should go and tell sorry, I love you to her. He hugs Sameer and thanks him for supporting him in Preeta’s matter. Sameer asks if Shrishti will forgive him. Karan is sure of that because Shrishti is a sweet girl. Prithvi and Preeta finally face each other. He congratulates her for defeating death and coming back. She tells that none can wipe off someone’s Kundali Bhagya. She asks him who is he to change her fate, he is a nobody. He tells that he is liking a strong contender in front of him. She asks why does she see his tension and frustration then. He tells that he isn’t scared of anyone.

She mentions that he is just lying, he is boasting of his smartness, he is really foolish to plan such a bad thing, he had sent fake police to get her killed. She calls him a failure. He tells that she can think anything she wants. She replies that she can throw him out of the house anytime she wants. He tells that it won’t be beneficial for her, she just wants Luthra empire. She tells that she has a big reason that he is here in the house. She clarifies that she likes to see his defeated face that gives her peace, she has kept him home for her entertainment. He asks her to talk less. She tells that she didn’t come to pass time, she has come to target him. She threatens him directly.

He tells her that she can fall over her face. She asks him to watch himself getting destroyed, because she has made all the arrangements already. He warns that he will also make the arrangements to destroy her. He wants to always remember that she snatched everything from him. He promises to snatch everything back from her. She tells him that she will defeat him, like today when he got defeated after reaching so close to his goal. She tells that he will hate himself when she forces him to apologize to the Luthra family. He asks her why is she happy thinking of his apology, like she is concerned for Luthras.

She tells that she wants his ego to shatter, then he will be the most hurt, he will be driven crazy, she wants him to apologize to Karan. He asks her if she know about Karan and Natasha’s story. She doesn’t understand how he can think of someone else, when he is getting ruined himself. She asks him to focus on himself. She goes away. He shouts that he hates Preeta. He doesn’t want to stop Natasha from doing anything against Preeta now. He also wants to see Preeta destroyed. Natasha goes to execute her evil plan. She plans to get her electrocuted. Sherlyn wants to find out Natasha’s plans.

Reviewed Rating for Kundali Bhagya 24th January 2022 Written Update New plot: 3/5 This rating is solely based on the opinion of the writer. You may post your own take on the show in the comment section below.